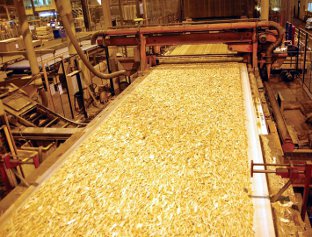 Sterling work 13 May, 2015 The Norbord OSB factory in Scotland reaches its 30th anniversary in June. Stephen Powney visited the mill to check on recent progress there. > read more

Innovation in the North American OSB industry 23 July, 2014 In this exclusive article for WBPI, Professor Philip D Evans of the University of British Columbia looks at the innovations developed by North American OSB producers to combat the problems of edge-swell

Russian OSB industry about to be transformed 18 May, 2012 The Russian OSB industry is on the brink of big changes, due to the forthcoming commissioning of several large production facilities for OSB in the country, notably by Partner Tomsk, reports WBPI’s correspondent Eugene Gerden from Russia

Another good year’s sales 17 May, 2012 The markets in 2011 outside North America continued strong, making it the third year in succession in which producers have sold every board they could produce. Prices remain under pressure while costs continue to rise. However, new capacity in a country new to OSB manufacturing – Russia – is the main news

MDI – a simple equation for OSB production? 16 May, 2012 MDI resins are used in the production of MDF, particleboard and OSB, and MDI maker Huntsman says that panel manufacturers are realising the performance, cost and environmental benefits they can offer. We talk to Huntsman about why it says this binder is fast becoming the no-added-formaldehyde solution for OSB manufacture

Better than the headlines suggest? 15 May, 2012 With the US single-family homes market continuing to languish during 2011, OSB producers have seen little change in demand and mills that were indefinitely closed in the last five to six years are still shut