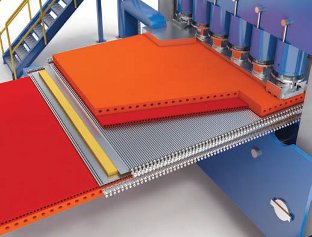 CPS press is reborn 10 November, 2015 After 25 years of making its CPS continuous press system, plant manufacturer Dieffenbacher says it has brought a completely reworked version to the market, unveiling the new CPS+ to the public at LIGNA 2015 last May. > read more

More OSB plants for Russia in coming years 10 November, 2015 Two plants for the production of OSB may be commissioned in the Russian Perm Krai region during the next several years, according to Viktor Basargin, the governor of the Krai region. Eugene Gerden reports from Russia.

Compulsory E1 in Europe – a defence 03 November, 2015 Mr Clive Pinnington, the new, and first, managing director of the European Panel Federation, finds that not all publicity is good publicity – especially when it comes via a TV news programme that promoted alarmist views on emissions from wood products.

Global energy supply 15 July, 2015 Vyncke NV says it had a good year in 2014, supplying its energy systems to over 40 customers worldwide, 10 of which were in the wood based panel sector, while there is also increasing interest from pellet producers around the world

Kastamonu to launch first stage in Tatarstan 04 June, 2014 Kastamonu Entegre, part of Hayat holdings, one of Turkey’s largest financial groups, plans on completing preparations for the launch of the first stage of its Russian woodworking factory in Tatarstan, Russia, officially scheduled for the second quarter of 2014, reports our Russian correspondent Eugene Gerden.

The future of the panel industry in Europe 04 June, 2014 The panel sector was hit hard by the financial crisis in 2008 and the drastic decline in demand between 2008 and 2012 left the industry facing a number of challenges. In this exclusive report, Cormac O’Carroll, Johan Carlsson and Ania Krolak of Pöyry probe the future for the industry.

Seeing better times 04 June, 2014 The future is looking good for OSB according to Norbord, the third largest manufacturer of the product in the world. This is a story first published in WBPI’s sister magazine, Timber Trades Journal (TTJ).

Committed to Poland 30 January, 2014 Kronospan is investing in a new OSB plant in Poland and planning to set up a research and development centre to bolster its operations in the region, reports Jaroslaw Adamowski.

A screening innovation 24 January, 2014 West Salem Machinery of Salem, Oregon, US has announced the development of a new screening design called the Waterfall Disc Screen.

MDF – from newcomer to stalwart 09 March, 2012 In 1976, when the first samples of Medite MDF were seen in Europe, few would have believed the amazing and positive impact MDF would have on the industry.

Recycling MDF: are we there yet? 09 March, 2012 The emergence of medium density fibreboard came at a time when function and performance were of greater importance to users than any concern for environmental efficacy or the ready availability of source materials.

Monitoring the air in our environment 09 March, 2012 Formaldehyde is a chemical widely used to manufacture building materials and various household products. It is also a naturally occurring chemical in all living things, plant and animal, and is essential to life. However, as with many things, it is concentration which is important and we know that high concentrations of formaldehyde can be damaging to health.