There was more to the panel products, decors and flooring at London’s Surface Design Show than met the eye. Latest surfaces are also about high tech materials and processing, malleability, texture – even smell. TTJ’s Mike Jeffree reports.

If you couldn’t find the colour, texture, pattern, or right product performance for the application you were after at February’s Surface Design Show in London, you weren’t looking hard enough, said one exhibitor. Either that, or you were overwhelmed by the choice and couldn’t make up your mind.

To say the event was about design diversity was an understatement. It was a showcase for the staggering variety that modern surfacing materials and manufacturing technology can produce.

Across more than 150 stands you could find everything from real bark cladding, and larch and waney-edged pine flooring, to illuminated acrylic worktops, mirror surface laminates, concrete interior panelling, thermo-moulded leather-effect coatings and acoustic panels made of alpine grass with daisies embedded in them.

The three-day event was held in the Business Design Centre (BDC), a regular stamping ground for London’s architect and interior design community. And it had the extra allure for the latter of a CPD Hub, where a range of presentations and seminars on surface development, performance and application enabled the professionals to earn their points.

The organisers estimate that of the 5,200 visitors from 47 countries, 80% were architects or designers, including 20 of the top 30 architectural practices in the Architects’ Journal’s AJ100. A third of attendees came with a live product in mind and 77% had purchasing or specifying authority.

“There aren’t many visitors here strolling around window shopping,” agreed another exhibitor. “They’re here to make specifying and buying decisions.”

The event once more featured the Surface Design Awards, which attracted 197 entries from 22 countries and, for the first time, a New Talent area – a showcase for young designers from across Europe.

New from panel maker Finsa on its striking timber lattice stand, where it showed its range of veneers and melamines, was Expressions, a range of 25 decors selected around upcoming trends highlighted in its 2018-19 trendbook, something it had developed with trend agency ‘Colour Hive’.

Based on Superpan MDF/particleboard composite panels, surfaces ranged from the trendy patterns of Terrazo Mix and Copper Patina, a metallic melamine, to block colours and wood decors, including maple, walnut and dark roble azabache.

Among the highlights from James Latham, which also has a permanent showroom at the BDC, were Italian AE Core solid colour laminates, designed to be post-formed without special machinery. Alongside were Kydex 3D thermoplastic laminates, which can be formed around compound corners and contoured edges and, with antimicrobial protection, are aimed at numerous applications, from doors and work surfaces for the healthcare sector, to aircraft interiors.

“They’re made by thermally fusing melamine resin-treated décor paper under heat and pressure to the panel to create surfaces with deeper textures and a lot of detail.”

Among the focuses from International Decorative Surfaces were colourways inspired by limestone and textiles in CamuStyle panel, featuring a more rugged TX finish for a “vintage look and feel”.

“Also exclusive to us in the UK and attracting a lot of attention from designers is Forescolor, a new MDF coloured throughout with organic dyes,” said key account manager David Bagshaw. “It’s moisture resistant, non-toxic and tool friendly and suited to a range of sectors, including furniture making, education, and shopfitting.”

Italian wood products and surfaces producer Cora saw no signs of Brexit deterring visitors from its stand. “We’ve been non-stop,” said wood flooring export manager Enrico Olivieri. “On the second day we had 25 in an hour.” He added that one visitor had been enquiring about flooring for an Aston Martin showroom.

“It also bonds to the top layer of wood, without forming a film or saturating the surface,” he said.

Also centre stage was Larice larch flooring, described as hard-wearing and moisture resistant, suiting it to both public spaces and residential use.

Surfaces from Arnold Laver included a high-resolution brick-effect fibre-reinforced laminate from Nevamar of the US, targeted at the shopfitting and other commercial sectors. It also showed LightBeton, which comprises a 2mm layer of real concrete, bonded to a wood panel to create the look of the real thing, and new acrylic mirror panelling from Paludet Mario.

“This can be decorative, or used as a mirror in commercial installations,” said Laver’s Narinder Bassi. “It gives 90% reflectivity.”

Flooring specialist Barham & Sons, which reported 20% sales growth last year, featured its solid wood ranges alongside laminate vinyl tiles and luxury mineral planks. The company’s John Esley saw particularly good prospects for the latter. “They’re increasingly popular due to the combination of aesthetic and structural integrity,” he said. “They use a mineral- and resin-based core, which is very stable and particularly suited for use with underfloor heating. It’s ideal for high footfall commercial installations such as retail, where one of our clients is River Island.”

A particular focus for veneer supplier DF Richards was surface effect and texture. It billed its silvered ranges, which are produced by exposing the wood to a “combination of heat and light”, as retaining a natural look and “avoiding the flattening effect caused by stains and dyes”. Feelwood variants are machined to replicate sawn timber, while Vintage Oak was made from reclaimed beams.

“We’re also showing coloured linear birch veneer from a Scandinavian producer,” said sales manager Tony Peskin. “It’s made with a process not dissimilar to reconstituted and engineered veneer and we’re feeling our way into the market, but it caught the eye of visitors.”

Kebony showed its decking’s use at London's Royal Opera House with the invisible Grad clip system, which locks into milled grooves on the underside of each board and gives low build-up dimensions, helping meet existing threshold heights. Fellow modified wood supplier Lignia had members of the team from new distributor Timber Connection on its stand, built entirely in Lignia. Besides decking, flooring and cladding, it was also showing its new Lignia Yacht alternative for Burmese teak deck.

“It matches teak in terms of resilience and durability, in fact it weathers more slowly,” said Lignia’s Nigel Pompeus. “We thought it might take a number of years to get established, but has really taken off and is being evaluated by some major ship yards.”

The company’s new fire resistant variant is also undergoing tests and it says it plans to produce joinery dimension product in 2020. New from Decospan was its Cabbani European oak engineered flooring. Made in France, its key is choice, said Mercedes Alvarez-Fojo. “It’s available in 25 colours and four finishes: select, rustic, aged and scratched, with the option of an HDF or birch plywood base.”

Meanwhile, reconstituted coffee grounds and old wine barrels were just some of the raw materials featured in products on Designer Walls’ stand. This specialist in commercial wall decors sources products worldwide, many being based on reclaimed and recycled products. They included Indian Gemss mosaic wood tiles in finishes from walnut to wenge, a mouldable cork and “deconstructed timber” wall covering and tiles fusing timber and acrylic strips that can curve around columns and plinths.

Pfleiderer said it was intent on further raising its UK profile and had a sizeable display under the slogan “More than a Pfeeling – difficult to say, easy to work with”. Samples of its latest decors were loose in large containers and visitors were invited to delve in and handle them. Among highlighted products were its super matt decors, produced in an intriguing process which involves subjecting them to a nitrogenrich, de-oxygenated atmosphere. This creates microscopic creases on the material’s surface, which not only gives it a velvety touch; it also makes it highly finger print resistant.

New from Reevewood was the Norfolk range of flooring. Available in 20 colours and various species, it features a robust factory-applied, LED-cured hard wax oil and is targeted at “those who just won’t get around to re-oiling”.

Getting plenty of visitor attention on Reliance Veneer’s stand was its real bark interior decor panelling, designed as a “statement feature” for the commercial and hospitality sectors.

Causing a similar stir was Organoids, which was showing, alongside its market partner engineered timber panel product and natural decorative surfaces supplier Nordcell. It specialises in making boards, wallpaper, flooring, acoustic panels and 3D mouldable materials in a range of natural fibres, from alpine hay and ground bark, to lichen and jasmine blossoms. The end products, says Organoids, are robust, versatile and visually unique. What’s more, you can still smell the jasmine! 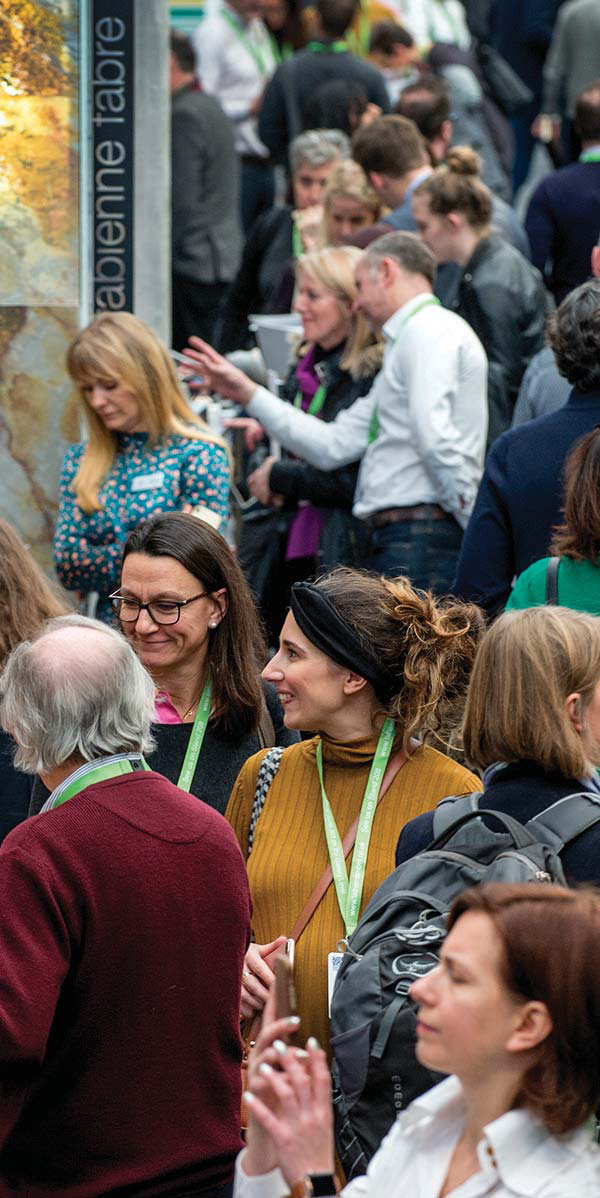 The show attracted 5200 visitors from 47 countries 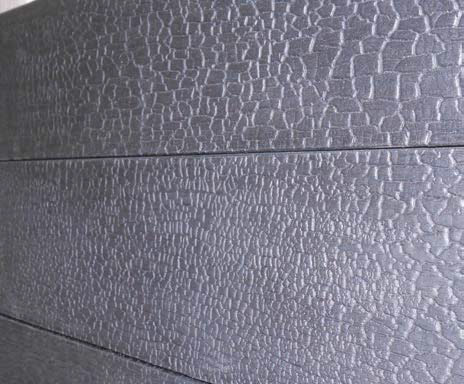 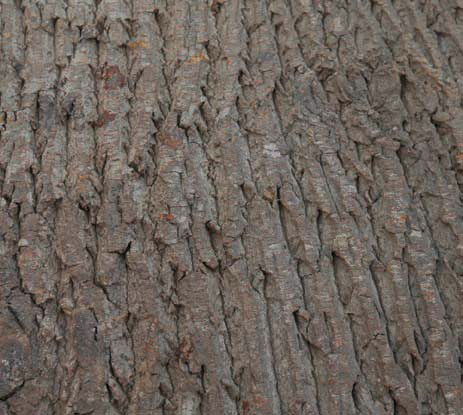 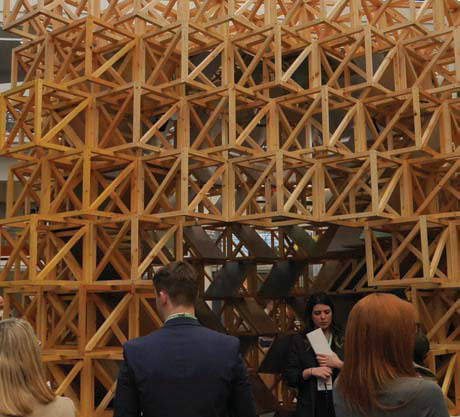