Growth, but with caution

This is our final survey of the world panel industry and covers mills operating in 2012 outside Europe and North America. We also look at new mills planned for 2013 and beyond and at the future prospects for the industry.

In part 1 of our survey of the world particleboard industry in 2012 (WBPI Issue 5, 2013, p14), we reported that things had changed for the better since our previous report, about 2011 (Issue 5, 2012), particularly in North America. This improvement was of course due to the recovery in housebuilding in the US.

We also reported that western Europe's particleboard industry was still in poor shape, with supply exceeding demand in a lacklustre market for housing and furniture, and with further mill closures to report, notably in Italy.

However, a more optimistic picture was painted by eastern Europe, notably Russia, with several new mill projects under way.

In this report, on "The rest of the world", we look at what has been happening in the world outside Europe and North America and find that there are more new projects in China - last year's report showed a total of nine for that country, most of which are now running - and also new projects in South America.

Some of these are in addition to projects shown in last year's report and some are 'held over' from last year's future capacity list as they were not actually running during 2012.

Putting a slight 'dampener' on new projects during the past year has been the decline in the rate of growth of the economy in China and also a slightly less positive outlook for the economy in the South American region.

Europe and North America accounted for 56% of that total in 2012.

We use a range of sources, including equipment suppliers, industry experts, relevant publications and not least the mills themselves, who are invited to visit our website www.intermark.plus.com at any time and enter or amend their details, or to email the editor: [email protected]

Such input is always most welcome in helping to ensure that our information is as accurate as possible.

We will now look at where the major capacity changes are occurring, or about to occur, around the world outside Europe and North America.

China
In the listing of Future capacity development in Table 5 of last year's survey of 2011 (p14), we showed the following mills, which have now been moved to the main listing as being operative in 2012:

Zhejiang Liren Group, Anhui; Guangxi Huasheng; Guangxi Xiangsheng, Chongzuo; Huzhou Shengyi; Guangdong Shixing Huazhou and Baimalong BML. All these mills had a rated annual capacity of 220,000m3. Wulian Particleboard and GaoFeng, each with 300,000m3, have also been moved to the main listing as operative in 2012.

Jianfeng in Bazhong, Sichuan Province, is a Siempelkamp ContiRoll project which we are advised is "on hold" with no confirmed startup date. We have thus shown that mill in "Beyond 2014" in Table 5. It is a large, 600,000m3/year project, involving an 8ft x 43.7m press.

It is interesting to note that the particleboard line originally planned by Guizhou Yuanfang was changed by the customer to a 220,000m3/year OSB line instead, ordered in 2013. This is a Dieffenbacher line and is one of two OSB lines ordered from that company this year for China, with others "under discussion".

As in past years, we have had to estimate total volume in China, as the many small rural mills make a truly accurate figure impractical.

Other Asia
The first continuous press for India, bought by Star Panel Boards, Mumbai, now known as Associate Decor Ltd, and located in Kolar District, Karnataka State, started production in March 2012 so is again included in the main listing in this report.

South America
In Argentina, Cuyoplacas SA has closed 100,000m3 of capacity in Las Heras Mendosa, as mentioned in last year's report, but has opened a 360,000m3 line in General Lavalle during 2012 and that mill is now shown in the main listings.

In Brazil, Arauco closed three older Dieffenbacher single-daylight lines at the end of 2011 (WBPI issue 5, 2012, p26). These were the former Placas do Parana mills at Curitiba and they have now been removed from the main listings for 2012 (they were still operating during 2011).

Repinho Reflorestadora added 93,000m3 to its line right at the end of 2011 so it is now shown in the main listings for 2012. Still in Brazil, Fibraplac plans to launch a 600,000m3/year MDP line in Glorinha and ordered the line from Siempelkamp in July 2012. However, delivery is reported to have been delayed to the end of this year, with intended launch in third quarter 2014. Likely reasons for such a delay are the less-positive economic outlook in the region and the MDP capacity increases planned by Duratex and Berneck.

Berneck is believed still to be planning on launching its 800,000m3/year MDP line in Curitibanos, Santa Catarina state, alongside its recently commissioned MDF line, but we think start-up could slip to maybe 2015 or later, from the original plan of 2014. It is shown in Table 5 accordingly, although the company is on record as saying, in 2012, that the future of this project is "not 100% guaranteed" (WBPI issue 6, 2012, p24).

Duratex's Taquari MDP line capacity has been increased from 500,000 to 700,000m3/year, after expansion of the wood preparation area, and was launched at the new capacity in August 2013. This increase is thus shown in Table 5.

Meanwhile, at Monte Carmelo in Minas Gerais state, Duratex plans a wood product complex, starting with an MDP line of 700,000m3/year, with a similar size press to the 38.7m one at Taquari. However, the press has not yet been ordered from Siempelkamp and the likely start-up date for this line is 2016.

The company has already ordered, again from Siempelkamp, a 77m press for a 750,000m3/year MDF line at the same complex, to run in parallel with the new MDP line, but with an anticipated start-up date of 2017, according to the ceo of Duratex.

In Ecuador, Novopan del Ecuador closed all its capacity at Guajala in 2006 when it moved to its new location in Itulcachi, which now has an annual capacity of 300,000m3. We have thus, rather belatedly and with apologies, removed the Guajala capacities and entered those at Itulcachi in the main listings.

In Guatemala, Maderas El Alto has been renamed Alianza Estrategica, whose assets were bought by Gem Corp, so our main listing has again been amended.

Middle East
We only have one firm development to report from this region and that is the plan by Iran's Pooya Wood to increase capacity on its multiopening Siempelkamp line in Shergah by 160,000m3/year to 360,000m3/year in 2013. It thus appears in Table 5 of this report.

However, we also know of a completely new continuous line ordered in 2013 for Iran, with a capacity of 240,000m3/year, but we are not at liberty to disclose full details of this line at the present time, so the company is shown in Table 5 as 'TBA', meaning To Be Advised.

Africa
We have removed William Tell, South Africa, from our listings as we were advised that the company ceased trading in October 2012.

The only mill in Swaziland, owned by NHR Investments, a privately owned Swaziland company specialising in forestry and forest products, was built to use all the residues from the company's sawmill on the same site.

Production began in September 2012 and we were told in November that it had reached 75% of its 150m3/day capacity. It is thus shown in Table 5 as 2013 capacity and will join the main listing for that year in next year's report.

The complete plant was supplied by Guangzhou Weiheng Machinery Co Ltd of China, with a 10-daylight 9 x 6ft press.

Future capacity changes
To summarise the aforementioned planned new capacities, the most striking regions for such developments from 2013 onwards are, once again, South America and China.

It is no surprise that China is number two in upcoming new capacity worldwide and, while previous confident talk of a big move into particleboard has proved unfounded, this time, 1,600,000m3/year of new capacity between 2013 and 2014-15 suggests things will be different and that there is now market acceptance in place of some MDF volume.

As we approach the end of 2013, there is a mixed global picture, with some good news, some bad and some just plain confusing.

With North America appearing to lead the way to recovery for most of 2013, the US government decided in October to throw the world into confusion by failing to agree on a national budget until the last moment. Although a 'fix' was found, there is still bound to be some uncertainty.

Meanwhile, the South American economies continue to give some degree of concern about the future and China is still moving cautiously.

As seen from Part l of our particleboard survey of 2012, eastern Europe is the home of good news in terms of capacity growth on that continent, while western Europe, still bogged down in economic problems for the Eurozone, continues to disappoint. 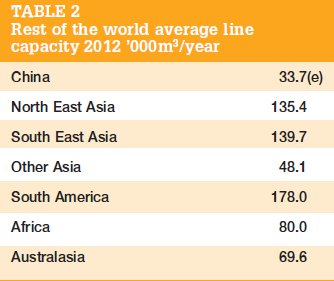 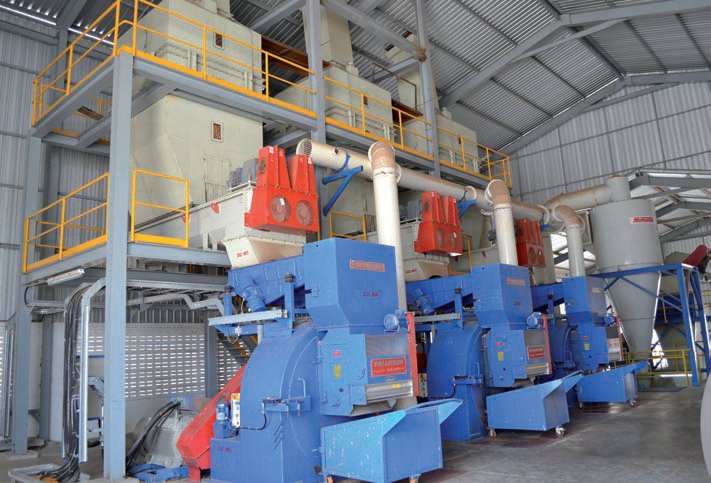 TABLE 1: Mills outside Europe and North America at end 2012 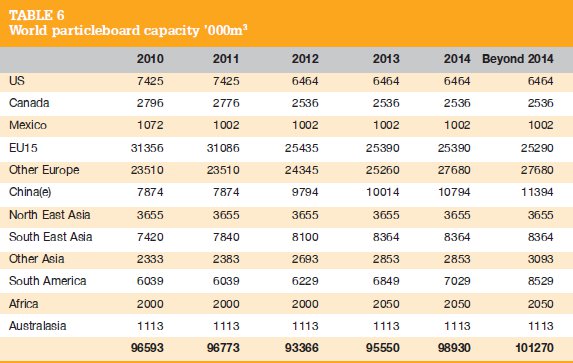 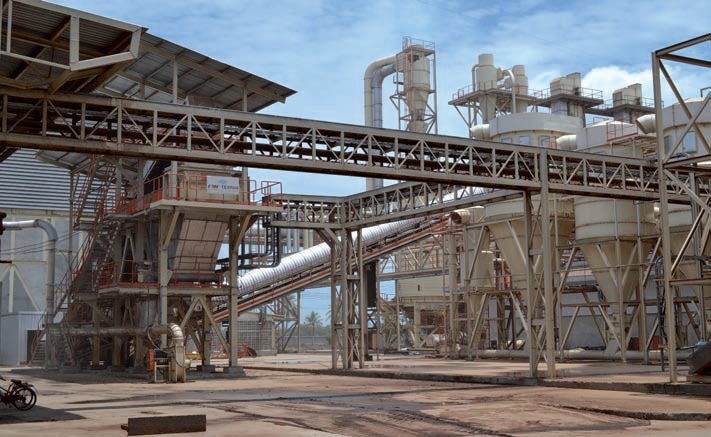 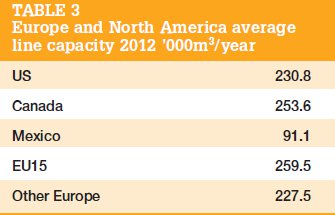