The future of the panel industry in Europe

The panel sector was hit hard by the financial crisis in 2008 and the drastic decline in demand between 2008 and 2012 left the industry facing a number of challenges. In this exclusive report, Cormac O’Carroll, Johan Carlsson and Ania Krolak of Pöyry probe the future for the industry.

The impact of the decline in demand for panels between 2008-12 was greatest in western Europe, but eastern Europe also saw significant decline.

Things started to look up in 2011 but the market recovery in western Europe was not sustained and two disappointing years of weak demand and low margins followed (2012 and 2013). Although the industry responded with some significant rationalisation initiatives there is still some way to go before the wood based panels sector can be considered "consolidated".

Across the value chain (especially in surfacing materials), vertical integration and asset optimisation have continued as companies focus on capturing more value in the chain, as well as strengthening their market position.

Changing consumer trends have also impacted the industry, with the rapidly growing demand for vinyl tile flooring (LVT) taking the laminate flooring industry by surprise. The future impact of LVT on established laminate flooring markets (and of course, HDF) is still uncertain, but several producers have insured themselves by adding LVT to their portfolios.

The most positive development in western European panel markets has been the resilience of OSB in the face of depressed construction activity following the financial crisis. As a result, the growth expectations for OSB in the medium term, once construction markets recover, have become somewhat bullish. The commissioning of the first OSB line in southern Europe, by IBL in Italy, underscores that industry's optimism.

Recent developments in eastern Europe (driven by Russia and Turkey) have been positive, with demand for all grades of wood based panels reaching an all-time high in 2013. An important milestone is expected to be reached very soon when Russia overtakes Germany to become the biggest particleboard market in Europe. Expectations of continued growth are attracting investment into the region - for example more than six million m3 of new wood based panel production capacity (particleboard, MDF and OSB) has already been announced for Russia.

Historically, many companies have failed to deliver on their investment announcements in Russia and the former CIS countries. However there has, over the last few years, been a clear shift in the type of companies looking to invest; from independent project developers to industry players with a strong track record in the sector, such as Sveza, Swiss Krono and Kronospan. This increases the likelihood of many of the planned investments being realised.

The expanding particleboard and MDF capacity in eastern Europe will also drive the need for new investment into value-added production, such as impregnation lines, short cycle presses and equipment for direct and digital printing, edgebanding, laminate flooring and furniture elements.

Financial perspectives
The panel industry continues to face a number of challenges: Capacity utilisation in 2012 was, on average, 15% below what was needed to hit reasonable profitability targets; and although utilisation rates have improved they are not yet where they need to be.

The financial performance of wood based panel producers (particleboard, standard MDF, thin MDF, HDF and OSB) in Europe has not been impressive and (raw) panel production is currently the least profitable part of the value chain (see Figure 1).

Panel producers in Europe achieved an average return on capital invested, or ROCE (capital employed) of 5% between 2007 and 2012. This is well below the risk-adjusted return required by financial markets. Customers, as well as suppliers to panel producers, all performed better.

Generally, there are too many players sharing too little value in the chain. As a result, vertical integration will continue and product innovation needs to increase to ensure the long term health of the sector.

Operational challenges
How well mills are managed, and how well operations are executed, varies significantly between different companies and even mills.

Pöyry's Operational Excellence practice has identified average savings opportunities of €20/m3 across a wide range of European panel mills. However, wood continues to be the highest input cost and the impact of a more competitive wood market is reflected in the financial performance of some panel producers, particularly particleboard.

The expansion of the bioenergy sector continues to pose a challenge to European panel producers. As EU countries strive to reach their 2020 renewable energy targets set by the National Renewable Energy Action Plans (NREAP), significant wood shortages for panels in some western European markets may emerge.

The UK, Benelux and Italy are most likely to experience increased competition for wood and therefore wood supply security will be one of the key challenges for these countries (see Figure 2).

However, the lack of effective financial support for bioenergy investments in many countries - and the development of global biomass-to-energy supply chains - will mitigate to some extent the impact of bioenergy on future European wood markets.

The future for European producers?
There are major regional differences within Europe and so a detailed analysis by region is needed. Pöyry's report looked at nine regions and developed separate supply, demand and pricing scenarios for each (see Figure 3).

The key factors influencing the future demand development for panels are GDP development, population growth, furniture production, construction activity and inter-material substitution trends. These (and other) factors were used by Pöyry to develop three scenarios for the period 2012 to 2020: Central, Stagnant and Dynamic.

Pöyry predicts that European panel demand will grow by 3% a year to 2020 under the Central Scenario. However, growth could be as low as 1% a year under the Stagnant Scenario, or as high as 5% under the Dynamic Scenario. Furthermore, the shift in demand from western to eastern Europe will continue. Fifty five percent of all panels will be consumed in eastern Europe by 2020, compared to 49% at present.

Pöyry's Zeno model has also identified a mis-match between industry investment plans and market requirements which will lead to declining prices for some panels and markets, but rising prices for others.

However if Pöyry's Central or Dynamic demand scenarios prevail, industry profitability will improve, but with very big differences between the best and the rest. 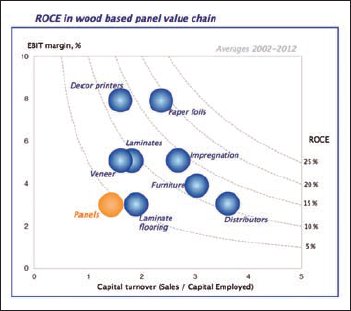 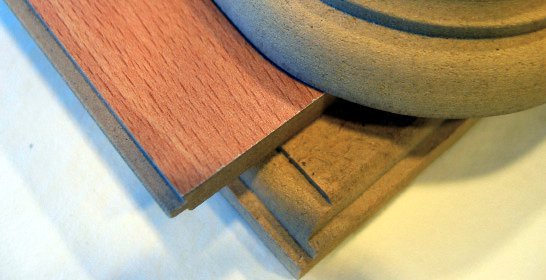