The future is looking good for OSB according to Norbord, the third largest manufacturer of the product in the world. This is a story first published in WBPI’s sister magazine, Timber Trades Journal (TTJ).

It's a turnaround from four years ago when the global economy was in the teeth of the recession and house starts - particularly in the US - were at rock bottom. Now, said Karl Morris, managing director of Norbord Europe, the company is "moving from a difficult period of cash management to a period of major cash regeneration".

"The last few years have been really tough," said Mr Morris, addressing a press delegation at the company's Inverness plant late last year, adding that the contrast between the heady days of 2007 and the slump of 2008 had been keenly felt.

"2007 was the most unbelievable year for panel producers," he said. "The good times ran to August 2008 and if you couldn't make money then you never would. But then it stopped dead. Customers went on holiday and didn't come back for three years."

This was seriously bad news for the industry - and for Norbord's nine North American operations, which manufactured OSB exclusively. Seventy per cent of North American OSB production was destined for newbuild in the domestic market. By 2009, this market had fallen by over 70% and some mills had ceased production.

"We mothballed three plants - Val D'Or in Québec Canada; and Jefferson Texas and Huguley Alabama in the US south," said Mr Morris. "The OSB industry as a whole permanently shut or mothballed 30 plants."

However, in the last 18 months, the situation has changed, driven by the recovery in the US housing market. The average OSB price has recovered - and Norbord's mills have ramped up production. The company's shares have risen from US$6 in 2010 to over US$30.

"So, we decided it was time to restart some of the mothballed capacity," said Mr Morris. "The Jefferson plant restarted in June, taking nine months at a cost of many millions of dollars. Alabama will be next - with a restart likely some time in 2015, with the final timing dependent on the market." The Alabama mill will take 18 months. It's a lengthy and costly process because former employees have moved on and new teams have to be trained for highly complex and technical operations, plus the plants have been cannibalised for spare parts during their downtime. In addition, when plants that have been mothballed for several years are started up again, machinery has a tendency to protest.

Meanwhile, back at the company's European operations, business has remained steadier.

"Norbord Europe has performed consistently well in the last four or five years and has generated decent earnings," said Mr Morris. "It's helped to keep Norbord afloat and raised the profile and credibility of the European business within Norbord."

"While Norbord may not have the scale on the market of Kronospan or Egger, we are a big player and the only one that has the three core products of OSB, MDF and particleboard manufactured and supplied from within the UK. This allows us a real logistics advantage over competitors with our customers, such as Jewson, Travis Perkins and B&Q," said the managing director.

And, from a UK perspective, Norbord is the biggest panel manufacturer, producing a total of 1.4 million m3 of product per year: Particleboard and MDF from Cowie; OSB from Inverness; and particleboard at South Molton in Devon, which is then converted into added value furniture components.

Elsewhere in Europe, Norbord produces OSB at its Belgian plant in Genk. Bought 10 years ago, when the plant was producing 150,000m3, annual output is now over 300,000m3.

OSB production is at full tilt at Norbord Europe's Inverness mill, which is "sold out", such is the demand for the product.

"OSB demand is very healthy at the moment and we believe demand across Europe will continue to grow. For example timber frame construction in the UK, which uses OSB as the product of choice, will grow over the next 10-15 years. Currently it only has around 15% market share of housebuilding, with the balance primarily in brick and block construction. So there is plenty of room for growth."

And Mr Morris added that forecasts by, for example the Purchasing Managers Index (PMI), backed the view that recovery was on the way.

"The PMI shows everything moving up - construction, housing, services and manufacturing - so the expectation is of better times ahead. The [UK government's] Help to Buy scheme is having a significant impact on confidence levels and house starts in the UK are up 27% this year - ahead of expectations."

OSB demand will grow in line with the recovery, he predicted, and a big driver in the product's future ascendancy will be plywood substitution, a phenomenon that is already well established.

"In 2007, construction panels, softwood plywood and OSB were all enjoying the strong market," he said. "But despite the downturn, more OSB was sold this year than in 2007, so it has already taken major market share from plywood. Around 50% of the UK OSB market is in general construction and RMI, so even though this is a much harder market to influence than, say the timber frame or furniture sectors, some of those 'white van men' must be switching from plywood to OSB.

"We'll never completely substitute softwood plywood but OSB has about 50% market share now - up from 40% in 2007 - and we'll continue to target it [plywood]." Product development means that Norbord has a whole armoury of new construction-oriented products at its disposal as it continues on this path.

Buildboard is an engineered, primed both sides, multi-use board suitable for a variety of building applications; and Sitecoat is a square-edged, OSB3 specifically designed for use in site hoarding and security barrier applications. This latter product is factory-primed with an eco-friendly, non-solvent coating that fills and smooths the surface. It is available either coated on one side, or coated on one side and primed on the other, ready for painting and/or application of site graphics.

In conjunction with insulation provider Rockwool, Norbord has also developed fire resistant products in line with guidelines from the Structural Timber Association (formerly the UK Timber Frame Association) addressing reducing the risk of fire spread during the construction phase of timber frame properties.

Armourcoat was developed for use with Rockwood Flexi Insulation and features a 9mm OSB3 panel with an intumescent coating on one or both sides. This coating acts as a shield against fire, swelling to create a char barrier many times the original thickness of the coating.

And Armourbond, a composite panel bringing together 9mm OSB3 and a magnesium oxide (MO) panel, offers a solution to meet Category C of the Building Regulations when used in conjunction with Rockwool Flexi Insulation. Here the OSB is bonded with an MO panel on one side and is coated on the other with an intumescent finish.

Norbord is also a high profile campaigner against the UK government's wood biomass subsidies and an advocate of the 'hierarchy of use' philosophy championed by the European Panel Federation (EPF).

Recently, for example, it distributed a 'parliament' of toy owls - the symbol of the panel sector's Let's use wood wisely campaign - to MPs and Lords with a leaflet on the benefits of using wood for manufacture rather than large-scale energy generation.

"Our industry is accidentally green," said Mr Morris, candidly. "It just so happens that we use wood, which re-grows and locks in carbon. But we are irked when the government gives money to power companies to burn wood that should have a better use."

The company's stance is that burning virgin fibre should be a choice of last resort and that a clearly defined and mutually acceptable hierarchy of uses - grow, use, re-use, recycle, recover (burn) - is critical for all business. And more coherent and uniform life cycle assessment methodologies must be adopted to demonstrate timber's core attributes.

"We're not against burning wood per se," said Mr Morris. "For example, we use our waste wood to dry the next batch of product - 0.25 million tonnes of water is drawn out of the wood at the Inverness plant each year and this is powered by wood energy.

"But we think the government policy of taking wood and paying people to burn it before it's been used is wrong. And subsidies change the whole competitive landscape. It forces the cost of wood up for us and while we can continue to compete, this means our own product prices will rise."

It currently has 130 employees and last year manufactured over 300,000m3 of OSB. This, along with the Genk mill's output, makes Norbord one of the largest OSB producers in Europe.

An expansion of OSB capacity at Norbord's Inverness factory would represent an investment of tens of millions of pounds and has the potential to create a substantial number of downstream jobs, the company has told TTJ.

Mr Morris, gave more details about investment plans after the company announced it had submitted a planning notice on February 7, 2014, to the Highland Council for a major capacity expansion at the Inverness factory.

The notice followed just days after the company revealed in its annual results that an expansion in its European OSB capacity was being looked at to meet an anticipated 50% increase in consumption during the next decade.

But, while excited about the potential for expansion at Inverness, Mr Morris said plans would have to go through the planning process and ultimately Norbord's board would make the final decision on whether to invest.

Norbord had already said its investment would be at Inverness or Genk, not both at this time, and Genk already has a continuous press line.

"The notice that was submitted to planning should be seen as a positive for Inverness," he said.

The managing director said detailed investment discussions, including with the local planning authority, had been going on for more than a year and initial discussions have been held with German continuous press manufacturers Dieffenbacher and Siempelkamp.

"We have had to do more preparation at Inverness than Genk because the scale of change at Inverness is bigger," he said. Mr Morris would not be drawn on the scale of the capacity increase being examined, other than it relates to a "large increase" [From other sources, WBPI has heard a figure of 600,000m3 per year - Editor].

"The advantages of a continuous press also give us great product size flexibility," he said.

Norbord will look at producing value-added OSB products, but emphasised that commodity products would continue to be the mainstay of production.

Investment at Inverness, Mr Morris added, would secure the long-term future of 130 factory staff and 300 jobs supported indirectly through the supply chain, as well as potentially substantial extra jobs in associated downstream operations, such as transport.

"The Morayhill site has been part of the Inverness landscape for more than a quarter of a century and has enjoyed very positive relations with both the local community and regulatory authorities.

"Building on that foundation is important and Norbord looks forward to the support of the community, the regulators and Highlands and Islands Enterprise in ultimately achieving final approval for the project," said Mr Morris.

Environ has been appointed to carry out the environmental impact assessments into Norbord's two planning applications, which related to enabling works and the new plant and the subsequent variation to the factory's environmental permits. 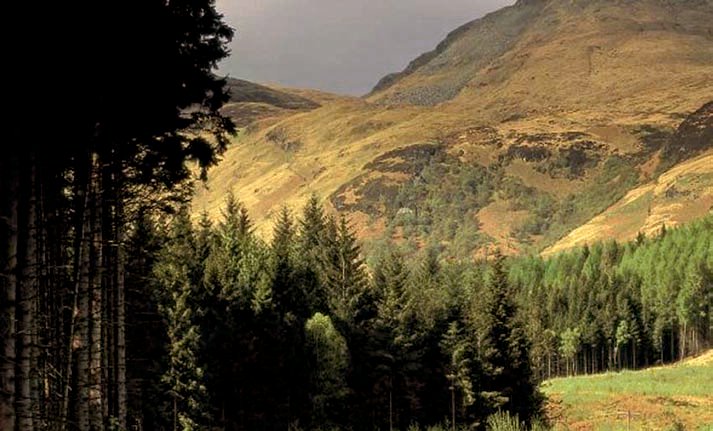 There is no shortage of logs for the Norbord line, though there is competition with biomass 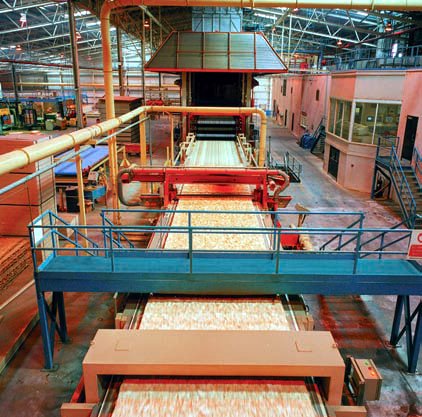 The production line at Inverness 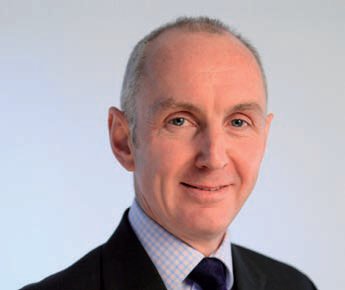 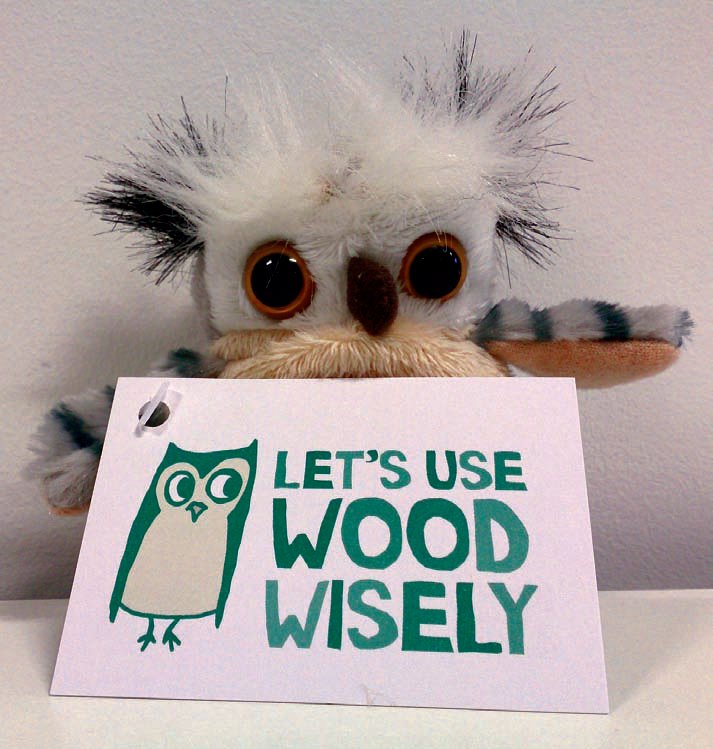