Rising to the challenge

Sanding technology producer Imeas reports that business has picked up in recent months since lockdown lifted in Italy and in other countries, while it is also seeing good results in its cross-laminated timber (CLT) product group. Stephen Powney talks to Imeas sales director Francesco Zenere

Imeas, the Villa Cortese-based wide-belt sanding technology producer, has seen business become easier in recent months as economies emerged from “lockdown” due to the Covid-19 pandemic.

It is heartening to learn that none of Imeas’ workers or their families had been impacted by the virus, but Imeas sales director Francesco Zenere said the pandemic has been disruptive to projects.

“Now it is becoming easier, but it is still not as before,” said Mr Zenere.

“We are doing support activity, training and can now travel in most countries. The market situation at the moment is tough but we have orders for another 10 months that are mostly the result of orders received before Covid hit in March. Recently we were able to secure some new orders for both the panel and metalworking sectors.

“For next year at the moment we are showing much more activity on the wood-based panels industry than for metalworking.”

The different timings of countries entering and emerging from lockdown has obviously affected the delivery of equipment.

“We have the factory quite full of machines for delivery but we cannot deliver all of them because the customer is not ready to receive it, or he had to stop for a while or other sub suppliers in the project were delayed.”

Imeas has had equipment ready for one Chinese customer for six months now. Another customer in Brazil told the company to suspend production of its order in April and it will now be delivered in October.

“Another customer in Canada is not in a hurry to get the machine, it is ready but he will collect it later because the other suppliers are not ready yet,” he added. “This is a situation we don’t normally face.”

While Imeas has several existing orders for China, Mr Zenere said activity there is far less than before February. “It will take a long time before they can sign an order, maybe by the end of the year this will happen.

“Covid-19 played a key role in stopping this and even up to now there are some areas in China with lockdown although this is not reported in newspapers so much. It is far from normal there.”

Imeas’ range of products for the wood industries includes the flagship EvoL range (launched in 2017) – its ninth generation of calibrating and sanding machines.

As the name suggests, it is the evolution of the company’s 50-year long experience and know-how in sanding of MDF, particleboard, plywood and other products.

The company has now sold a total of 160 sanding units of the EvoL type, of which 46% have been sold in Asia and 25% in Europe. In terms of panel type, more than 70% will be used for MDF production, the remaining will be used for particleboard (12%), plywood (10%) CLT and OSB.

Imeas has grown a lot in the market for CLT sanders in recent years since it sold its first CLT unit in 2007.

IMEAS has been involved in 25 CLT projects with a total of 55 sanding units, of which 80% have been sold in Europe, 10% in North America and 10% in eastern Europe.

“To give you an idea of the market growth, consider that 80% of those sanding units were sold in the past five years and 60% in the past three years only!” said Mr Zenere. The most recent customers have been KLH (Austria), Mayr Melnhof Holz (Austria), Setra (Sweden), Stora Enso (Sweden), three lines sold to Structurlam (Canada), Element 5 (Canada) and Binderholz (Germany). In Europe there are ongoing negotiations.

“We are working with other suppliers like Ledinek which is supplying the planing equipment for projects.”

After a long gap between its first and second CLT project, Imeas then saw exponential growth, mirroring the growth pattern for CLT globally, with enquiries coming in from worldwide – northern Europe to Australia, New Zealand, Brazil and North America.

“The machines we deliver for the CLT market were originally developed for the US market for 10ft wide MDF and particleboard.

“When the request came to produce panels of that size – 10ft x 12m by 300- 400mm thickness – we were lucky enough to have the technology already in house. We had to modify certain aspects of the machine and extend the opening of the machine from 300 to 400mm and actually we have delivered one machine up to 700mm.”

The increase in CLT machine business came at the same time there was a drop in projects for MDF/particleboard plants, especially in Europe, and a lot of competition in China.

“In North America there has only been a couple of [MDF and particleboard] projects in the last 10 years and in South America the market has stopped at the moment. So it is important for us to develop in CLT.”

Ultimately, software integration and automation are playing a key role in CLT sander installations and it is Imeas’ goal to extend the same concept to other markets as well.

A couple of years ago Imeas upgraded an old Finsa line in Spain, built in the late 1980s. “The purpose was to automate a very old line and we achieved this goal by adding motors to control the position of each sanding unit and upgrading the CPU of the PLC and installing and testing new software,” said Mr Zenere. “So we have control of the thickness before the panel enters.”

Sometimes the final sanding unit is adjusted and sometimes the calibration roll as well depending on what is found when measuring the panel. And the panel is also measured after the process, so all this data is digested by the software and the proper adjustment is sent to the machine for the next panel.

In short, the machine works automatically for 99% of the time with minimal intervention by the operator.

“The quality [at the Finsa mill] improved dramatically and one of the problems that was solved was that of operator turnover.

Moreover, if you have two to three shifts or alternating teams during a week everyone tries to adjust the machine in a different way. The result is you have differences in the quality of product you are supplying to the customer – and if you have variation of product you have rejection of panels with extra costs.”

This brings us on to the Full Control System (FCS) which combines the best mechanics and electronics into an easy-to-use graphical interface with which it is possible to control every aspect of the sanding process.

Mr Zenere said the most forward-thinking customers choose to have the FCS integrated to the machine when they order from Imeas, although with the EvoL range it can be added later as an upgrade. “We have only to install the components and upgrade the software.”

Customer requests for FCS are often due to operators not being skilled enough or because they already have a high level of automation before and after the sanding machine in their line. “Why not have automation on the sanding side as well?”

About 50% of customers ask to have FCS integrated in the machine at time of order, with all CLT machines built with the FCS as standard.

Crossbelt sanders are another area where Imeas is confident about growth prospects, due to its ability to achieve a high quality, smooth homogenous surface. MDF/HDF and particleboard panels that are to be varnished, painted or coated with light melamine papers are particular target markets.

It has built 11 of its CrossSanders to date – the first was delivered to Roseburg Forest Products (former Willamette Industries plant) in 2002 and the latest one will be delivered this November to Segezha, together with another sander for CLT. In terms of application, 60% are used for MDF, 30% on CLT boards and 10% on PB panels.

“Until the beginning of this year we had several crossbelt sander projects ready to start, but unfortunately they were all stopped and put on standby because of Covid-19 and reductions in customer budgets.”

“Most of these projects are adding a crossbelt sander to an existing line for product quality improvement,” said Mr Zenere. “In other cases we are talking about supplying new crossbelt sanders for new factories.

“In some case like in Brazil and another customer in Russia they have left the space in the factory to add the crossbelt sander in the next one to two years.

But Mr Zenere said there was still some scepticism in the market.

“It is a disruptive technology in MDF production. It is very well known in the lacquering markets for panels being lacquered for furniture but not by producers of MDF.

“We need to have a critical mass of crossbelt sanders installed before this can really boom.”

CLT sanders are a strong market for Imeas 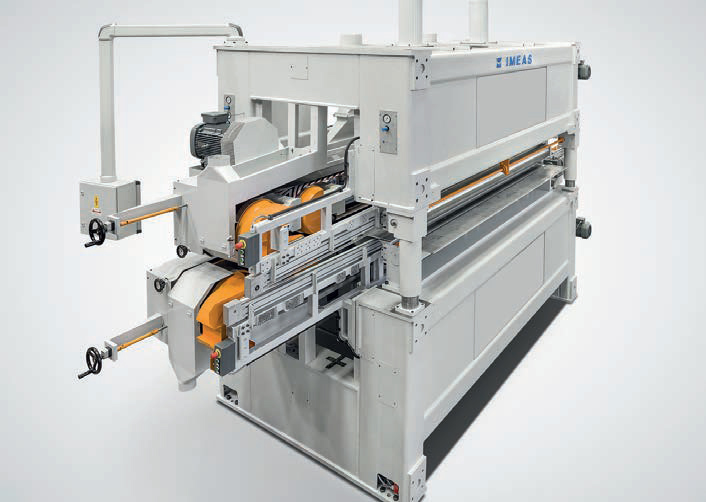