Playing at home and away

Leading South American board maker Duratex has revealed it could begin work as soon as the start of next year on a US$564m project to construct Brazil’s biggest wood panels complex in Minas Gerais state. Richard Higgs visited Duratex to being this report.

Duratex, owned by the powerful Brazilian Itaú banking group, has given more details of its revised scheme for two big panel lines, each around 700,000m3/year capacity, due to be installed at Mina Gerais.

But, with an eye on a flurry of recent MDF capacity launches in Brazil, Duratex revised its plan, deciding to first install a 700,000m3/year MDP line with 38.7m press, due to start up in 2016. The bigger MDF line will now be constructed in parallel at the site with a launch date of early 2017, said ceo Antonio Joaquim de Oliveira.

"We changed the order of the project because MDP needs to catch up a little. This is a greenfield project. We will start to put in the infrastructure for the complex right now - maybe starting in January 2014," he told WBPI in São Paulo at the end of July.

At that time, Duratex was discussing changing the supply order with Siempelkamp, which will deliver both lines. Two big melamine laminating lines and a decor paper impregnation line will also be ordered, with one of the low pressure lines set for delivery in 2016 and the second a year later.

The panel complex is being located at the heart of an extensive eucalyptus plantation developed by Duratex in the west of Minas Gerais state. Raw material will come from an average distance of just 35km.

The 150ha industrial site will be connected to two separate rail lines for shipment of panel products; Duratex intends to put in a 12km link line from the plant to one railway crossing the forest area, while the other track will pass directly through the new complex.

"Here [in Minas Gerais], we have 100% of the wood we need for the two panel lines. Duratex is the only company in Brazil that has forest for growth. Now we need to use it," said Mr Oliveira.

The complex is just one part of Duratex's plans for the next five years, consolidating its market leadership in both its wood products and bathroom fittings divisions. Apart from the new panel complex, the wood division is also just completing major investment projects initiated two or three years ago at three of its other panel plants.

At Itapetininga, São Paulo state, Duratex has just launched a new Siempelkamp ContiRoll MDF line with a 520,000m3/year capacity, while its 700,000m3/year Taquari MDP plant, in southern Brazil, started up in August, after a US$50m upgrade.

Meanwhile, a similar investment at Duratex's existing Minas Gerais panel plant in Uberaba allowed the completion in September of line modifications to enable a 100% switch from pine to eucalyptus - set to increase plant capacity by up to 15%.

Apart from Brazil, the group has made clear its intention to invest more abroad and last year acquired a 25% stake in Colombia's expanding MDF and particleboard producer Tablemac (see p40).

This September, Duratex announced it was seeking to take up an option to buy a further 15% of the firm. It made a tender offer worth US$22.5m for the shares which, if successful, will give the Brazilian group a majority 52% stake.

Duratex has already drawn up a comprehensive development plan for Tablemac.

"We have plans for a continuous MDP line [at Tablemac] of maybe 300,000m3/year, but we have not decided the right moment for that project," the Duratex ceo said, adding it would be five or six years before such a project could proceed.

But first, the Colombian company's forestry problems need to be tackled: currently, Tablemac has less than 5,000ha of plantation on a land holding of just 7,800ha, although it did plant 1,000ha last year. Tablemac will need another 30,000ha of planted forest before it is able to support such an industrial expansion programme, suggested Mr Oliveira.

For Duratex, Colombia is just the start of its plans for development elsewhere in the region. The group is seeking opportunities to invest outside Brazil for both its divisions - perhaps in neighbouring countries such as Ecuador, Peru and Bolivia.

"I hope that by the end of this year we will have finished a business plan for Latin America. It depends on the opportunities [available], but we think we need to go ahead sooner rather than later," explained the ceo.

Duratex is not looking to launch greenfield projects abroad but will consider purchasing an existing operation, or investing in a consolidation project with another company, similar to the Tablemac deal, he said.

Duratex has not been deterred by a recent bitter experience with its bathroom fittings business, Deca, in Argentina: Earlier this year, it closed down its Deca plant in Buenos Aires, which Mr Oliveira blames on Argentine government intervention and "the situation in the country".

Back in Brazil, Duratex still plans a panel plant in the fast-developing northeast.

Brazilian board producers have long recognised the market potential in its growing coastal cities and states, like Maranhão, Pernambuco and Ceará, and also the cost of serving it from distant southern plants.

Last year, the Duratex board authorised US$150m to develop a forest base and construct a mill in the northeast.

This year, attention has been focused on the successful launch of the group's new Siempelkamp ContiRoll MDF line at Itapetininga. The first board was produced on the 58.7m press in mid-June and commercial production was scheduled for August.

Much of the new MDF facility, including the energy plant, was supplied by Siempelkamp, while Metso supplied the woodyard, refining and drying.

"The refiner start-up was incredible - in one or two days, with good fibres, without vibration or any problems. It was a new equipment supplier for us," Mr Novaes commented.

At the end of this year, Itapetininga is also due to launch a Vits impregnation line.

Duratex has also invested in a Spanish Barberán high gloss lacquering line, adding a further finishing option for the eucalyptus based MDF panels. The line was scheduled to be operating by end-2013.

Duratex remains confident that, after an extraordinarily erratic 2012, and some uncertainty earlier this year, 2013 should not prove to be such a bad trading year.

Panel producers in Brazil experienced huge demand at the end of 2012 and start of 2013, but the market settled back to a slower pace in the second quarter. With new MDF capacity now on stream, and doubts about economic growth, there has been some uncertainty as to just how tough a second half the industry will face.

There is little doubt this Brazilian group has lost none of its determination to take on a challenge - at home or abroad. 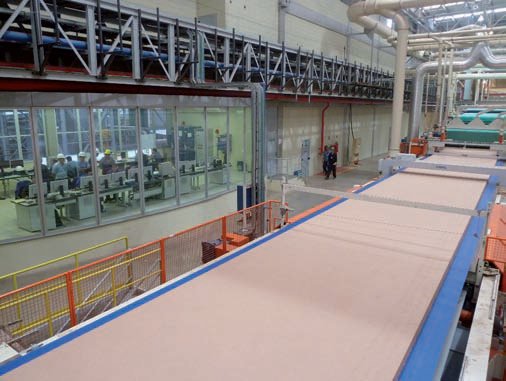 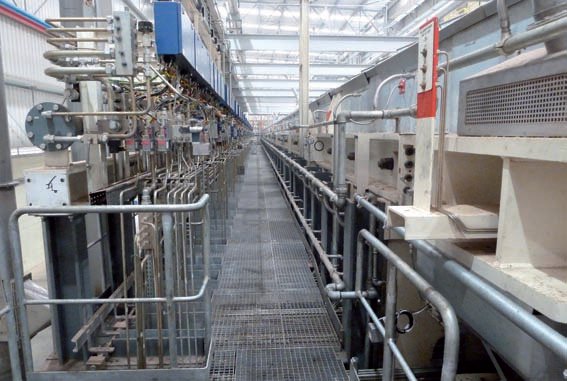 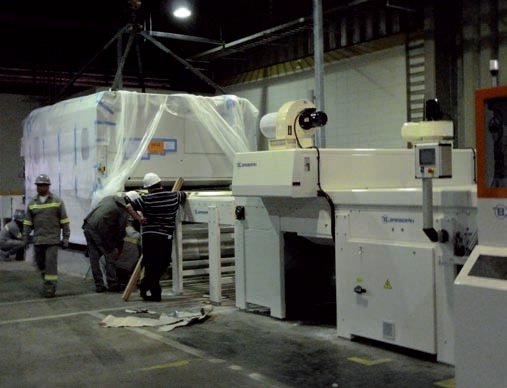 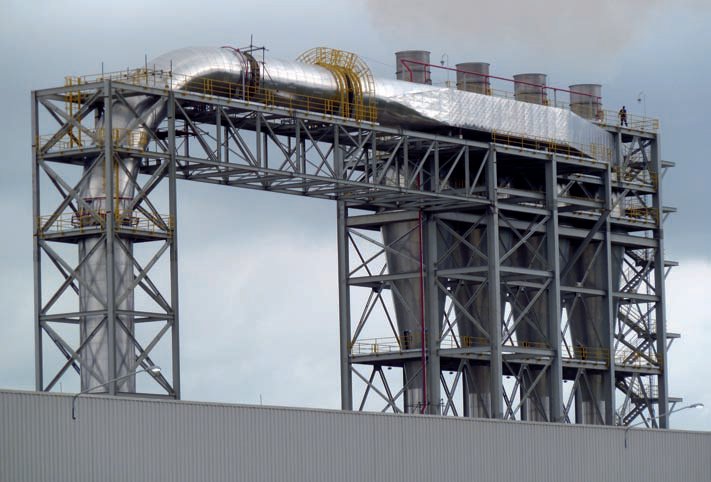 The 52 tonne/hour Metso drier at the new Duratex MDF plant in Itapetininga. 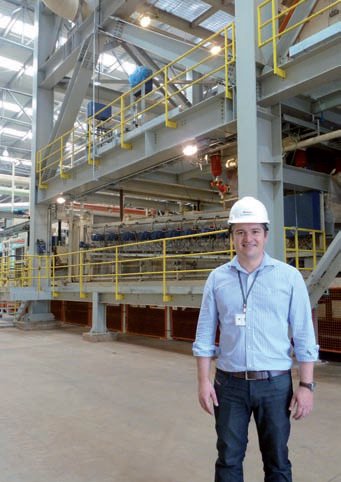 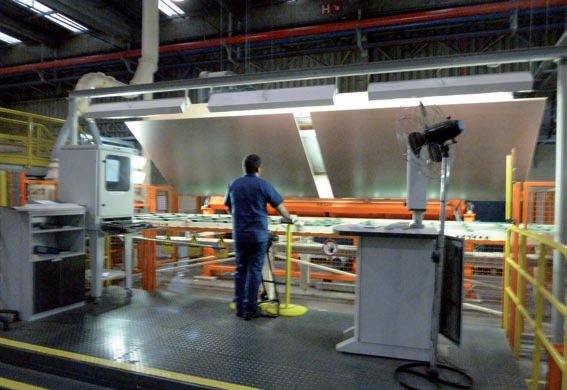