Masisa confirms its commitment to Brazil

Key to the success of this Chilean group’s strategic plan is how it develops its existing operations to serve the region’s huge and still-growing board market in Brazil.

Masisa do Brasil continues to invest heavily to boost its production capacity, add value to its products, and streamline the performance of its two panel mills.

The firm is already ramping up medium density particleboard (MDP) production to full capacity on the 750,000m3/year continuous-press line it installed two years ago at a new mill in Montenegro, Rio Grande do Sul state.

Together with Masisa’s 330,000m3/year nominal output MDF line at Ponta Grossa in Paraná state, which is 10 years old and now at full stretch, the firm, based in the state capital Curitiba, can count on a combined output of more than one million m3/year.

Today, in common with other Brazilian producers, the company is entering a new cycle of capacity expansion to meet the needs of the vibrant domestic market. Masisa is set to decide on the site for a 450,000m3/year MDF line and to place an order for the machinery before the end of this year.

We understand it has been considering whether to build the new line at one of its existing southern production sites or opt for a new green field plant further north, possibly in the state of Minas Gerais.

Depending on where this line is located, Masisa do Brasil is now looking at a likely start-up date of either mid- or late-2013.

In line with the Chilean group’s regional strategy, its Brazilian offshoot is also preparing for a further expansion project. This envisages the construction of a third MDF line at a site dependant on where Masisa installs its second unit, with a proposed start-up date of around 2017.

“As with all the companies, we’re studying a new MDF project to increase our capacity because we have been over-sold in the last two years. We need more raw board in the mix as we are able to laminate more or less 95% of our [effective] capacity,explained Masisa do Brasil’s industrial director Mr Rossler.

Masisa’s initial MDF expansion scheme will comprise a package including two melamine low-pressure laminating lines, a paper impregnation line and, ideally, an integrated resin plant. Both its existing production plants could accommodate a second panel line, although the company will have to bolster its forest resources near the Montenegro complex if that site is selected.

Gaining sufficient forest in Rio Grande do Sul is still complicated, though the pressure of several years ago, when forest products companies competed with farmers against biofuels, has subsided. Even so, much of the land is still divided among large corporate owners and the asking price is high.

In Paraná state, conditions are more relaxed and forest more abundant. The bigger panel makers have secured their own plantations and most are now switching from traditional pine to the more productive eucalyptus. At Ponta Grossa, Masisa do Brasil can already draw on wood from some 12,000ha of forest land.

The main attraction of looking north in states like Minas Gerais or Bahia is the widespread availability of forest there; and lower cost of suitable land. The rising cost of shipping panels north from southeastern mills, and the headache of transshipment between incompatible rail systems certainly help strengthen the case for a local project.

Wherever Masisa expands, it is likely to face an additional hurdle if, in the process, it needs to purchase sizeable new areas of forest land. More than a year ago, the Brazilian government introduced new legislation restricting foreign-owned companies from buying up large land holdings.

However, Santiago, Chile, based Masisa could clear this hurdle if it were to go into partnership with a Brazilian pension fund or other large landowner with forest. The new law was passed in response to fears of an agricultural land grab by Chinese investors.

In common with other Brazilian panel makers, Masisa do Brasil is taking steps to cut its manufacturing costs in a bid to achieve lowest-cost-producer status. This year, the Ponta Grossa mill has installed a new debarking and chipping line to enable it to chip its own logs and use the bark for biomass energy in place of gas.

As part of an investment programme totalling more than US$7m, the mill has also just started up a new 10Gcal thermal oil system for the MDF line, replacing the original thermal oil facility, formerly shared with, and managed by, Louisiana Pacific on the split Ponta Grossa site, after LP bought Masisa’s Dieffenbacher OSB line there.

That is not the only investment Masisa is making there this year. To handle Brazil’s growing demand for laminated MDF, it is installing a Tocchio overlay paper impregnation unit, closely followed in early 2012 by a third low-pressure melamine line.

These will be housed in a new US$18m 7,500m2 finishing hall being built at Ponta Grossa, due for completion in the first quarter of next year.

The company is also investing five million US dollars to improve output and quality on the 43m-long Dieffenbacher press line at the Montenegro MDP plant. Parts of this hybrid line, including the now-rebuilt press, were formerly employed on Isobord’s 240,000m3/yr strawboard line in Winnipeg, Canada.

Its big MDP line has already produced board to its nameplate 750,000m3/year capacity, but not using 100% wood chips. This has meant Masisa having to use sawdust and more glue to compensate for a lack of screening efficiency, so the firm is replacing the line’s two original Allgaier screens with new wet chip screening units, adding a fifth dry material screen to boost efficiency and a second horizontal cooling wheel.

The initial line ramp-up took output to around 550,000m3/yr early this year and the latest project is designed to extend its capacity and allow it to run premium quality product at full speed at a competitive cost, Mr Rossler told me when I visited in June.

Brazil’s MDP manufacturers are making a big effort to boost their production of added-value laminated panels. An estimated 70% of all board sold in Brazil today is unfinished and goes to customers for painting.

This trend results from a continuing demand for lower-priced furniture from Brazil’s growing ‘new’ middle class. But producers are turning out more melamine-faced MDP as customers, mostly the established middle class, opt for better quality.

“We are increasing our share of laminated board every month at Masisa. The big challenge today is to substitute melamine covered panels for painted board, but it is not easy. The cost of papers and resin for laminates is very high now,commented the Masisa operations chief.

Although the MDP market continues to grow, now it is often considered a low-priced, rather mature, product and panel producers seem less keen to invest in more new lines. That said, Masisa is still keen to optimise the capacity of its Montenegro line ready for what Mr Rossler believes will be a shortage of particleboard in Brazil by next year.

At the heart of the Montenegro plant lie the refurbished Dieffenbacher pre-press and 43m long, 2.9m-wide main press.

The MDP line features new Dieffenbacher-supplied formers and a gluing section provided by Imal. The German main supplier also delivered the line’s diagonal and trimming saws, while downstream equipment, including the uncommon horizontal cooler, was shipped from Canada after modification for particleboard use.

A mix of round wood used in the mill is delivered by truck from up to 200km away. Pine is hauled from the mountain and coastal forest of the state, while eucalyptus logs travel 150km. Montenegro also uses acacia, transported less than 100km, according to the plant’s Argentine manager Juan Schmidt.

When Masisa raises the line’s capacity, it is due to begin shipping in wood by rail from forests up to 400km away in the south of Rio Grande do Sul state and the south of the neighbouring state of Santa Catarina.

Montenegro’s wood yard, with a capacity for 20 days’ production, feeds two chippers, one from US supplier Acrowood with a debarker and the second, a 700tph Brazilian Bruno unit without a debarker.

In June, the MDP line was still using a small level of bark but there are plans to install a new debarker with the Bruno chipper to divert all bark to the energy plant.

This year, it took positive action to protect the local community from possible air pollution from its energy plant. Masisa invested around five million US dollars to install a Turbosonic electrostatic filter, reducing emissions of dust and VOCs.

At Montenegro, the plant’s wood preparation section has six Pallmann ring flakers, running five of them, with the sixth as a spare unit. It also includes the site’s giant 36m-long US-made TSI drum dryer.

In June, the Montenegro mill was finishing panels using a Hymmen melamine continuous press laminating line. With the expansion of MDP output expected next year, Masisa plans to install a second laminating line in the second quarter of 2012.

Brazil’s rapidly changing market, and the need to switch overlay designs quickly, has prompted the selection of a single-opening press melamine line this time.

“It is more difficult to change the band on a continuous line. When you need to change the design, it takes perhaps five to eight hours to switch. But a single opening press takes just 20 minutes to change,explained the plant manager.

For Masisa, a leading player in panel finishing, the latest trend of adding value to raw board comes naturally, not least at a time of lower panel prices and escalating production costs.

The Chilean producer’s latest investments and significant growth plans for Brazil demonstrate a firm commitment to its future in South America’s fiercely competitive but most promising marketplace. 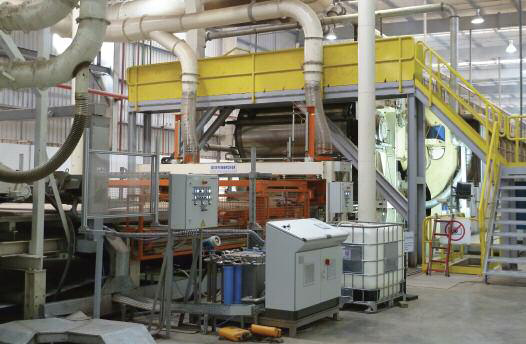 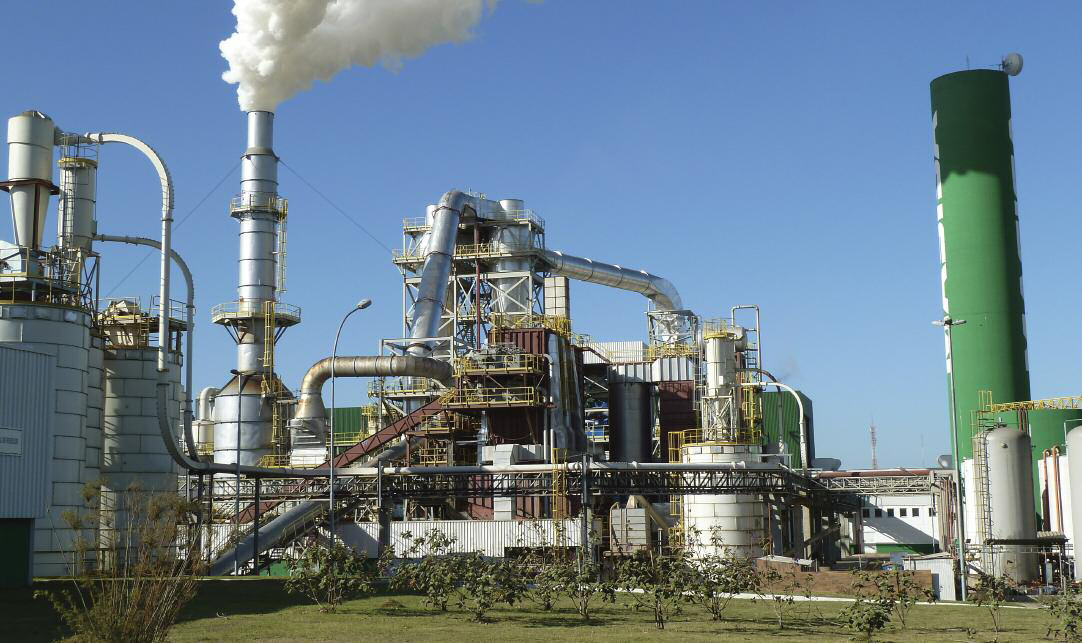 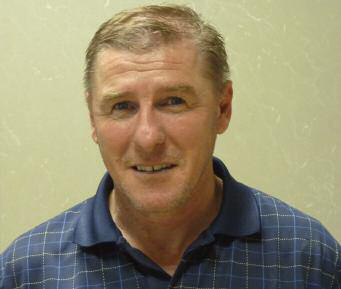 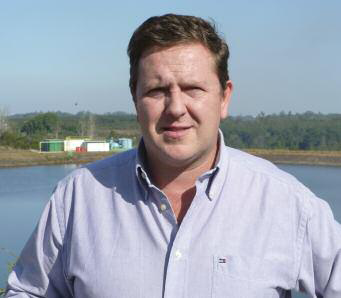 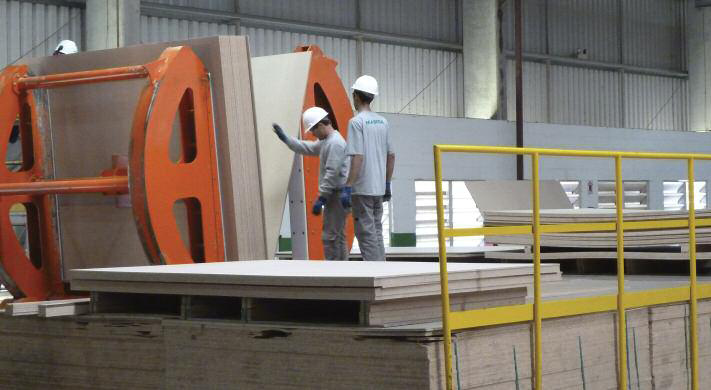 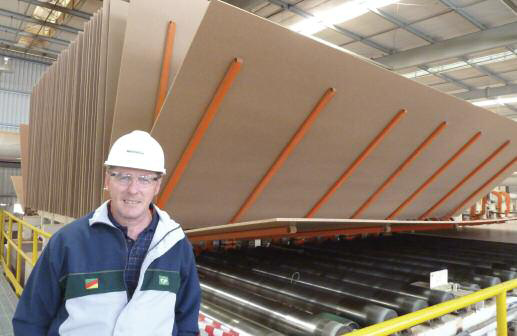