Austria’s Kronospan is aiming to invest some €120m in building a new MDF production facility in Zvolen, in central Slovakia, with plans to supply the factory’s increased output to the construction and furniture industries. The latest initiative marks another project to ramp up the Slovak factory’s manufacturing capacities since the group acquired it in 2003.

According to the Slovak Ministry of the Environment in an official document released last June, the new plant is expected to produce about 450,000m3 of MDF per year, manufacturing widths of between 6mm and 38mm. The group’s local subsidiary, Zvolen-based Kronospan sro, was required to submit this data as part of its application for an environmental impact assessment.

“The construction of a new production facility will expand the production programme of the plant with MDF … in the thickness range of 6mm to 38mm and in the density range of 600kg/m3 to 900kg/m3,” the manufacturer said in the submitted documentation, adding that the new facility’s output will be intended “in particular for use in the furniture and construction industries”.

“The implementation of the plan will increase the competitiveness and economic sustainability of the company in European and global markets,” Kronospan said.

The latest development marks another investment in upgrading the Slovak plant. In 2017, Kronospan unveiled plans to inject some €15m to expand the facility’s production capacities. By fitting the factory with an additional capacity to process 350,000 tonnes of wood per year, Kronospan was to produce particleboard from recycled furniture and other wood waste, and create new jobs at the plant. For the purpose of this investment, raw material to be processed was to be sourced from the domestic market, but also imported from abroad.

The Slovak factory’s history dates back to 1946 when, following the end of the Second World War, a woodworking plant was opened in Zvolen by local company Bucina. In 2003, Kronospan acquired the business, strengthening its position as the largest producer of wood-based panels in the Slovak market. The firm operated under the brand of Bucina DDD until October 2419 when it was rebranded as Kronospan sro.

Kronospan operated a second production facility in Slovakia, located in Prešov, in the country’s eastern region, but started to divest from the factory in 2011 after disagreements with the then Slovak government. The manufacturer initially planned to raise the plant’s output and expand its product range. However, after the country’s authorities declined to provide Kronospan with tax cuts for its investment, the business decided to scrap its plans to upgrade the plant, and instead began to scale down its operations in Prešov.

Some local observers say Slovakia is seen as an increasingly attractive location for investments in wood-based panel manufacturing owing to the country’s natural resources, positive economic outlook, and a preferential location in central Europe.

The latest available data from the Slovak Ministry of Agriculture and Rural Development indicates that in 2019, Slovakia’s total forest area reached about 1.95 million ha which, compared with 1990, represented an increase of 28,300ha, or 1.5%. Since 1990, the average increase in the country’s forest area stood at 943ha per year, the ministry said. This has allowed Slovakia’s forest area to account for as much as 41.3% of the country’s territory in 2019.

At the same time, Slovak wood production has reported a significant expansion over the past two decades. In 2019, about 9.9 million m3 of wood was produced in the country. This represented a robust increase of 87% compared with 2000.

Zvolen, a city with a population of more than 42,000 inhabitants, profits from its location in the Banská Bystrica region, which is one of the areas of Slovakia that has the highest share of forests, at 49.1% of the region’s territory, according to figures from the Agriculture Ministry.

In addition to the country’s significant natural resources, other advantages of investing in Slovakia include its proximity to large EU markets and a stable macro-economic situation, as indicated by data from international organisations.

“The Slovak economy is projected to grow by 4.2% in 2021 and 5.2% in 2022,” the Organisation of Economic Co-operation and Development (OECD) wrote in an analysis published last May. “After a strict lockdown in early 2021, domestic demand will rebound from the second half of the year as vaccines continue to be rolled out and most containment measures are lifted. Investment will accelerate in 2022, aided by EU structural funds and the new EU Recovery and Resilience Facility. Unemployment will fall gradually, but still remain above pre-crisis levels at the end of 2022.”

The European Commission’s forecast for the Slovak economy is even more optimistic than the one prepared by the OECD. In 2021, Brussels expects Slovakia’s gross domestic product (GDP) to expand by 4.9%, a sharp increase from the 4.8% decrease reported in the preceding year. In 2022, the country’s economy is to further accelerate its expansion, with a GDP growth of 5.3%, according to the Commission.

“Continued improvements in sentiment, including in the hard hit services, retail and construction sectors, suggest that domestic demand moved onto a solid recovery path in the second quarter [of this year] and should keep expanding in the coming months,” the EC wrote in its analysis. “Going forward, the implementation of the Recovery and Resilience Plan is set to strengthen private and public investment, further contributing to the recovery.”

Foreign investors could also be lured by Slovakia’s relatively low wages, compared with various EU member states. Last June, the country’s average nominal monthly wage increased in almost all sectors. Nevertheless, it still remained lower than in numerous EU member states, at some €1,270 for those employed in the industrial sector, as indicated by figures released by the state-run Statistical Office.

Set up in 1897 as an Austrian family business, Kronospan says it operates a network of some 45 production facilities across the world. The group says that, following the collapse of the Iron Curtain in 1989, “Kronospan recognised expansion opportunities within the new markets of east and south-east Europe,” initiating a string of acquisitions that added factories in Belarus, Bulgaria, Croatia, the Czech Republic, Hungary, Latvia, Lithuania, Poland, Romania, Russia, Serbia, Slovakia, Ukraine and potentially other countries throughout the region to its portfolio.

The latest additions to the group’s portfolio of manufacturing sites includes two plants in the Russian market, located in Igorevskaya and Chaadaevka, both of which were opened in 2021. 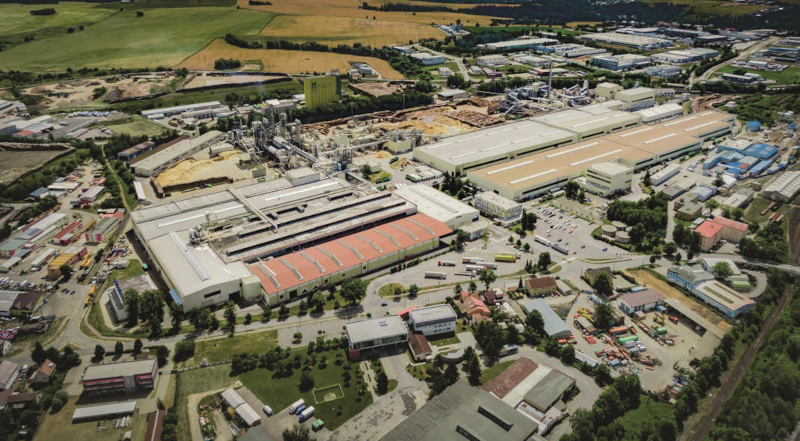 Kronospan recently celebrated the 25th anniversary of the foundation of its plant in Jihlava in neighbouring Czech Republic. The Czech factory employs a workforce of about 700 employees, and it makes particleboard, OSB boards, laminated boards and worktops PHOTO: KRONOSPAN 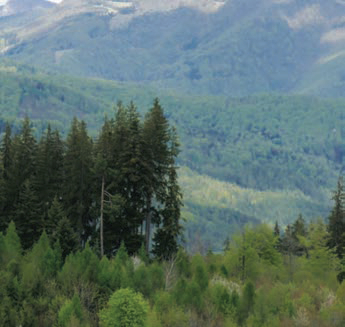 More than 41% of Slovakia’s territory is covered by forests, which encourages investments by major wood industry players PHOTO: SLOVAK MINISTRY OF AGRICULTURE AND RURAL DEVELOPMENT