Global prospects for MDF and particleboard

MDF and particleboard producers in Europe and China will, over the next five years, benefit from a strong recovery in demand, driven by a US housing recovery. In this exclusive report, Bernie Neufeld of BIS Shrapnel highlights key findings in the company's recent global study.

However, the production of these two wood panel products will vary significantly by region over the next five years. The increase in production for both products could lead to a surplus of global stock and constrain price growth unless there is a significant increase in consumption in non-producing regions.

The continent of Europe, which is still struggling to return to growth following the global financial and economic crisis, will be the main beneficiary of the expansion in particleboard production, with exports set to more than double during the five years to 2017 as production expands in Belarus, Bulgaria, Hungary, Latvia and Russia.

Western Europe (excluding Russia and Turkey) remains the dominant particleboard producing region, accounting for 38.9% of the world's production in 2012, or 28.7 million m3. This will increase slightly by 2017.

Europe, including Belarus, Bulgaria, Hungary and Latvia, will produce 34.8 million m3, accounting for 39.3% of global production. The 'greater European' region, including Russia and Turkey, is by far the largest producing region, with 53.4% of the world's production in 2012. This will rise to 53.9% by 2017.

While Europe is also one of the larger MDF producing regions, there has been a shift in production from Europe and North America to Asia over the past decade.

North Asia largest MDF producer
By contrast, North Asia, which was not significantly affected by the global financial and economic crisis, has a voracious appetite for MDF and is likely to be the main beneficiary of the expansion in MDF production.

The North Asia region will account for 54% of the world's MDF production by 2017, consolidating a decade-long shift away from the traditionally dominant producing regions of North America and Europe.

In the early 1990s, the furniture industry in China was driven by domestic demand, in line with improved living standards. This resulted in the establishment of many new production facilities and the introduction of modern technology in these plants. As domestic demand increased, and China became a major exporter of furniture, the furniture manufacturing industry expanded exponentially.

Many foreign firms shifted their operations to China to take advantage of low labour costs, export subsidies, and improving quality standards. These modern firms had a preference for using MDF for furniture manufacturing and this drove the expansion of MDF production in China.

Over the forecast period, the focus of growth in China will shift from an export-led economy to one driven more by domestic demand. While this could place some constraints on the production of, and demand for, MDF in China, the shift away from North America and Europe to China, and other parts of Asia, as the dominant MDF producing regions will continue over the forecast period.

Strong recovery for N America and others
An increase in demand in the recovering building and furniture manufacturing sectors in North America will be a key driver for growth in the production of MDF and particleboard.

However, due to the global financial crisis, the region will run into capacity constraints following the closure of mills over the past five years. The downturn in housing construction in the US reached the bottom of the cycle in 2009. Construction began to recover in 2010 and is well on the way to much stronger growth over the next five years.

This recovery will drive economic growth, not only locally, but in many of its key trading partners around the world.

It will also drive renewed demand for furniture and, ultimately, the demand for MDF and particleboard.

Housing construction in other key regions, such as South America and Asia, will also drive global demand.

However, this may not be enough to meet increasing demand and the MDF and particleboard industries in North America are likely to run into capacity constraints. As a result, North America could be a target export market over the next five years.

Global surplus may constrain prices
Production of particleboard by major producing countries is projected to increase from 73.6 million m3 in 2012 to 88.6 million m3 in 2017, based on current expansion plans and estimated capacity utilisation rates. However, production at current plans is forecast to outnumber consumption globally, leading to a potential surplus.

Given the projected increase in production to 88.6 million m3 over the same period, consumption in non-producing countries, and regions such as the Middle East, Africa, and other South American countries, will need to be in the order of 3.8 million m3 by the end of the forecast period for a surplus to be avoided. Therefore, price increases will be constrained somewhat by the expected surplus in supply. 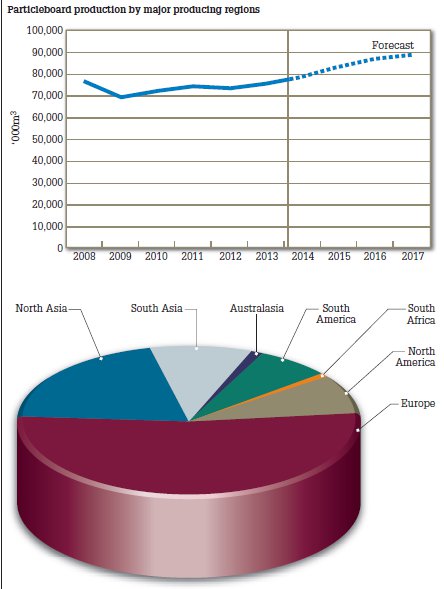 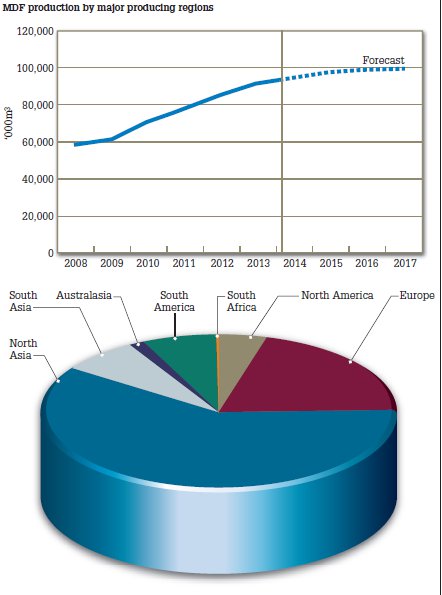