Ever thought of OSB variants?

The global OSB industry has developed considerably since the product’s first creation in the 1970s and now interesting OSB variant products are creating attention on the market, reports Markus Trame, project manager marketing and PR at Dieffenbacher

Compared to plywood and particleboard, oriented strand board (OSB) is a recent invention.

It was introduced in the US as “waferboard” in the 1970s but today’s OSB is a major improvement over waferboard.

The original waferboard had an homogenous composition of thin rectangular wood flakes and wasn’t developed as a structural board. By contrast, OSB has greater rigidity and strength, brought about by creative engineering and orienting the flakes differently. When serious moisture resistance was added to OSB, it became a real competitor to plywood.

In the US, OSB is commonly used in the construction of commercial and residential buildings, typically in wall and roof planking and flooring. Due to the board’s mechanical properties and moisture resistance, OSB is used in either dry or humid areas as a load bearing and even high load-bearing board.

While many OSB plants in the US today use multi-opening presses, the continuous production process for OSB is more common elsewhere. The typical board thickness range is about 6-40 mm, and the raw density is approximately 550-700 kg/m³.

Originally, only logs were used to produce OSB, but today OSB can be produced from a wide variety of raw materials, giving manufacturers maximum flexibility.

Dieffenbacher from Eppingen, Germany, was active from OSB’s earliest days and today is a leading OSB plant manufacturer.

Between 1974 and 1989, Dieffenbacher supplied eight multi-opening presses for OSB production to the US and Canada, alone. In most cases, the associated dryers, forming stations and Flexoplan systems were delivered by SCHENKMANN-PIELEngineering and Schenck Panel Production Systems, which were later acquired by Dieffenbacher. Many of these plants are still in operation.

Some of the newly developed OSB variants that panel producers can choose from today are Fine OSB, Container OSB and OSB with an advanced or recycling wood core layer.

OSB is an economical alternative to plywood for almost every application. But the product’s one limitation – its poor laminating capability – was resolved by Dieffenbacher technology for the production of what is now known as Fine OSB.

In Fine OSB, the OSB core layer is covered top and bottom by layers of particleboard to give a better structure to the top surface.

This makes possible further processing according to individual needs, including laminating or coating on both sides with melamine or phenolic paper in a shortcycle press.

Given the lower cost of the raw material, Fine OSB represents an economical alternative to plywood. It combines the robustness of OSB with the surface quality of particleboard.

The floor of an ocean freight container is subject to major stresses. It has to transport heavy loads through all kinds of climate zones over periods of weeks or months.

Previously, such demands could only be met by plywood panels made from tropical hardwood veneers, but these have steadily become scarcer and more expensive.

Container OSB offers a low-cost alternative. By replacing the central veneers of plywood with an OSB core, the consumption of costly tropical timber can be greatly reduced.

OSB with an advanced core layer

OSB with an advanced core layer gives panel producers the flexibility to use inexpensive raw materials such as macro chips, short logs, branches, industrial or recycling wood and residual wood from sawmills, without compromising board quality. Especially when using recycling wood, this type of OSB helps reduce costs and simultaneously contribute to sustainability and environmental and climate protection.

In developing OSB with an advanced core layer from recycling wood, Dieffenbacher applied the combined expertise of its Wood and Recycling business units. Having supplied five complete wood recycling plants since 2016 to customers such as Pfleiderer, Fundermax and Nolte, these experts had all the technology needed to make recycling wood usable for particleboard production. They used that technology to adapt flake production for the advanced core layer.

To date, Dieffenbacher has modified the forming stations of two OSB plants to use recycling wood for the production of OSB with an advanced core layer. 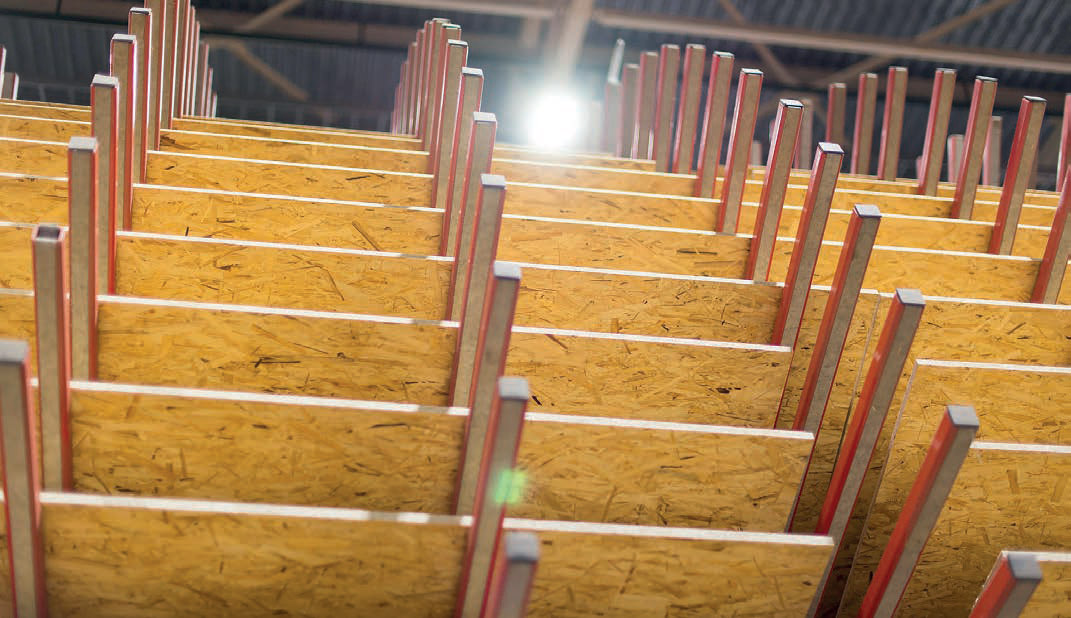 OSB boards in a cooling wheel

OSB with an advanced core layer 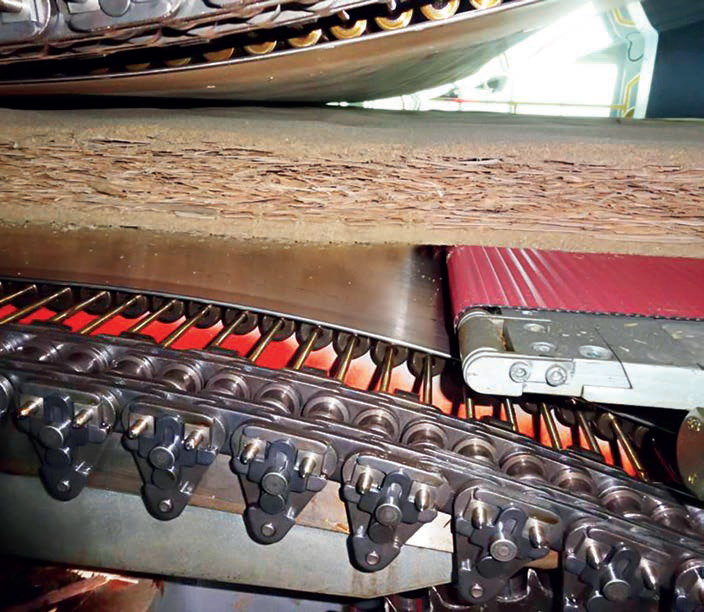 Production of Fine OSB in a continuous press