In the first part of our annual world survey, we list the particleboard mills in Europe and North America up to the end of 2013. We also look at the markets in that year and at the prospects for the future.

The housing recovery in the US continued through 2013 but, perhaps surprisingly, there is still no sign of investment in new particleboard lines to replace the nation's ageing stock of mostly multi-opening presses, many of which have ceased production in recent years. In fact, there have been several recent mill closures to report, some of which will not come into effect until the 2014 year (this report covers 2013).

Meanwhile, in Europe, the western region continues to show little or no positive news for the industry, with several more closures to report, notably in Italy.

As has been the case for the past few years, however, eastern Europe has a number of new mills planned and under construction, which will see the region's annual capacity grow by 3,180,000m3 between 2014 and 2016.

Europe
In his presentation of the 16th annual report of the EPF (European Panel Federation) to its AGM, honorary president Ladislaus (László) Döry reported that particleboard production in the EPF member countries shrank by 1.5%. However, he pointed out that this was a lesser decline than that seen in 2012 (-5.5%).

"In 2013, the largest downward variations in national production were observed in Greece and Norway," said the president. "Both countries experienced substantial declines in production capacity. On the other hand, significant increases in output were seen in Lithuania, the UK and Estonia.

The Baltic States seem to be recovering earlier from the economic crisis, while the British housing sector has upturned in 2013 and started to support the recovery in the particleboard industry."

The UK Timber Trade Federation (TTF) reported in March 2014 that imports in 2013 showed considerable growth towards the end of the year and, for the whole year, achieved a year-on-year increase of 37%, to 570,000m3.

Meanwhile, UK imports showed significant growth throughout the year, with the first quarter showing a 24% rise and the first six months an increase of 42%. The third quarter showed a 35.4% increase and the final three months +41%. France, Portugal and Belgium all increased their market shares in the UK.

This rise in imports must be at least partly attributable to the closure of the Sonae particleboard plant in Knowsley, near Liverpool, in September 2012. Much of this loss was made up from other Sonae plants in Europe, notably the Iberian peninsula and France. Not surprisingly, UK exports of particleboard tumbled in 2013, by 53.9%, to 73,000m3.

Returning to the EPF report, Mr Döry said that: "With a stable output, Germany remained the largest particleboard producing country in Europe in 2013, accounting for somewhat less than one-fifth of the EUEFTA production volume. France and Poland continued to complete the particleboard producers' podium, despite decreases in their production. Notwithstanding a significant drop in output, Poland kept its third place at the expense of Italy, where production also decreased. With its double-digit increase in production, the UK joined the club of producers of more than two million m3 of particleboard in 2013 and completed the top five.

"Expectations for 2014 are stable to slightly positive, with the rise in production in the EU-EFTA area as a whole estimated at +1.5%, giving production of slightly less than 29 million m3," said Mr Döry.

Closures to report in western Europe include the Depalor mill in France. Owned by Swiss Krono, this mill was closed by fire in July 2013 and in November, Swiss Krono announced the closure of all raw board and laminated production at that site. Staying with France, Isoroy's mill at Auxerre was formally taken over by Kronospan Group in January 2014, so for simplicity we have changed the name in our listings.

In Belgium, Unilin closed its multi-opening line at Wielsbeke in September 2013, removing 200,000m3 a year from our listing.

In Finland, the news is not of the closure of a line, but of its replacement. Two single-opening presses have been replaced with one Dieffenbacher single-opening line, but the capacity will remain unchanged. This new line was commissioned in mid-2014.

Italy continues its tale of woe from the panel industry with several particleboard mill closures. Trombini closed its Falco plant at Pomposa di Codigoro in mid-January 2014 so it remains in the listing of capacity extant in 2013. The company's Frossasco mill (300,000m3) closed in late 2012 and has been removed from the list for 2013. Sichuan Guodong Construction - a Chinese panel manufacturer - was reportedly interested in purchasing the Falco mill but we have found no confirmation of this happening.

We also advised in last year's report (WBPI October/November 2013, p14) that Fantoni's particleboard line in Osoppo (45,000m3) was to close during 2013 and that has also been removed from the listings.

All these are in addition to the closures listed in last year's report, which amounted to 725,000m3 a year of capacity even then.

We have also rearranged some mills in the 2013 list to accurately reflect their ownership. In Sweden, we have removed the Byggelit mill at Ambjorby as we are advised by the company that it only has the Lit mill still in operation, with an annual capacity of 80,000m3.

New capacity in greater Europe
Once again, we have to look to eastern Europe for news of additional particleboard capacity, particularly in Russia. Here, the Ufa Plywood Plant mill, now owned by Kronospan, is receiving the line which was removed from Sonae's former UK plant and this is due to start production in April 2015 with a capacity of 500,000m3. However, the company is in dispute with Greenpeace Russia concerning alleged potential formaldehyde and wood emissions. This project was also delayed by encountering ground problems which required extra piling.

The Sveza Group is, as we reported last year, installing a complete plant in the Ekaterinburg region for start-up in the second half of 2015 with a capacity of 600,000m3 (up from 500,000m3 reported last year).

Our Russia correspondent Eugene Gerden reports that a group of Swiss and German investors is considering building a new particleboard plant in Russia's Komi Republic to the west of the Ural mountains, in the northeast of the east European plain.

According to Vyacheslav Gaiser, president of the Komi Republic, the new plant will be built in the Troitsky-Pechora area, known for its rich forest reserves, reaching 5.1 million m3 per year, 60% of which is spruce and pine.

The proposed line will have the capacity to produce 100,000m3 of particleboard per year.

The last-mentioned is a Dieffenbacher project first announced for start-up in 2006 but now due onstream during 2014. The plant was originally ordered by a company named Elektrogorskmebel and was the first Russian order for Dieffenbacher. However, we understand that when commissioning was due to commence, the customer couldn't obtain the gas and electrical power needed and Elektrogorskmebel in fact went into insolvency.

Since that time, no other company had come forward to buy the almost- finished plant, which also had a board width (6ft) that didn't match the requirements of the market.

Then Kronospan bought the plant in 2013 and set the wheels in motion again for a 2014 start-up.

Meanwhile, in Belarus, the Kronospan Smorgon plant of 340,000m3 capacity was expected to ramp-up capacity during 2014.

North America
The CPA (Composite Panel Association of North America), which says it represents 93.8% of active North American particleboard capacity, reported that the capacity stood at 9,236,000m3 in January 2014, down 6.6% on the same month in 2013. This was due to the following closures:-

Following its takeover by Arauco, Flakeboard has been renamed Arauco North America. As this only came into effect in August 2014, the name will be changed in next year's listing.

In Canada, Northern Engineered Woods' mill at Smithers, Alabama, closed in 2013 so its 97,000m3/yr capacity will again come out of the listing for 2014.

Corresponding average line capacities increased for the US and Canada, while decreasing for Mexico (see Table 2).

Closed North American plants fall into two categories: intact/restorable; and closed or dismantled. For 2014, 10 lines are intact/ restorable in the US and Canada combined (totalling 1,854,000m3); and 10 plants closed or dismantled (1,376,000m3). See www. compositepanel.org for details of how to join the association. 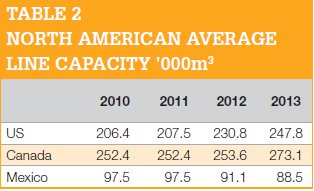 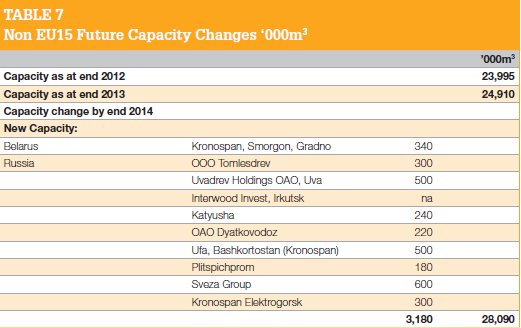 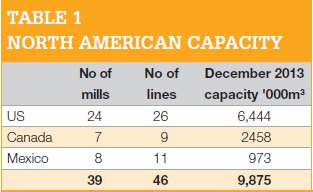 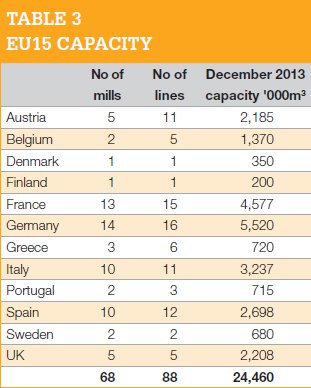 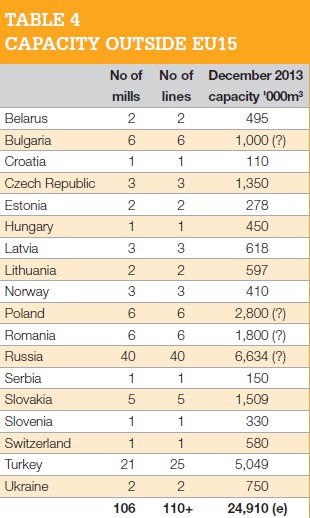