Bürstadt is one of the biggest ready to assemble furniture manufacturers in Germany, specialising in the production of wardrobes and kitchen cabinets.

Due to the needs of its customers, the company made the decision several years ago to modify the construction of its furniture, replacing its elements traditionally built in particleboard with those in a lightweight honeycomb construction.

Essentially, it needed to manufacture panels it previously bought from external suppliers, thus in the process expanding from being just a furniture manufacturer to also being a lightboard producer.

Biele’s Wood Division specialises in the design and manufacture of automation solutions for industrial wood processes – from the initial manufacturing process for panels and boards and their subsequent processing or coating, to the final manufacturing stage of doors, parquet or furniture.

The first phase included the composition and pressing of lightboard and a complete finishing line, with the ability to produce 2,000 boards per shift.

The second line was developed to enable higher yields, with up to 20% more output than the first line.

Bürstadt Furniture can now manufacture five million piece of furniture per year, due to both composition lines producing up to 40 linear metres of board per minute each.

Particleboard and HDF enter the line in raw board format, as well as honeycomb material entering the line continuously.

“The complexity lies in the fact that despite the different nature of the input products, the composition of the board is produced continuously, dominating the entire process at high speed and with great efficiency,” said Jesus Telleria, Biele commercial director.

Gerald Gassen, Bürstadt Furniture project director, said the outstanding feature of the BOS line was the capacity to produce boards in a continuous process with automatic insertion of honeycomb in between the stiles.

In total, Biele developed four multi-daylight presses (10 daylights each), the longitudinal and transversal trimming machines, as well as a complete handling solution for both composition and pressing and finishing lines.

The sandwich lightweight boards produced consist of two HDF decks, honeycomb and particleboard stiles in the core, glued together with a PVAC glue.

The two composition and press lines occupy a surface area of 96m x 55m and the two finishing lines an area of 120 x 26m.

The optimised automation allows the manufacturer to run with reduced labour costs, since the BOS lines run with no more than five operators.

Bürstadt Furniture said the lines allow it to produce its own lightboard panels and adapt its production to meet its customers’ needs and expand their product range. 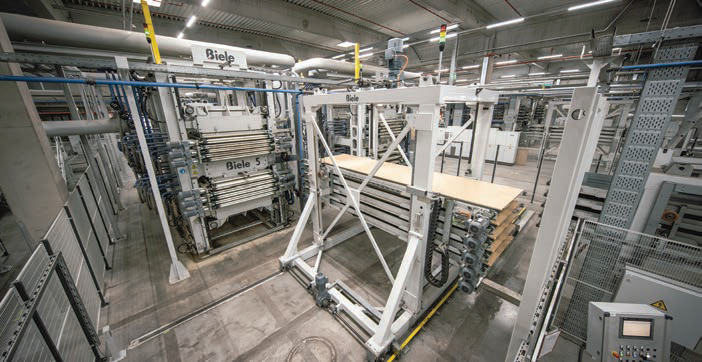 The Bürstadt Furniture installation by Biele