The 11th European Wood Based Panels Symposium was jointly organised by the European Panel Federation (EPF) and Fraunhofer WKI and was held in Hamburg in October. Mike Botting was there to bring this summary of some of the papers presented

The Grand Elysée Hotel in Hamburg hosted around 345 delegates for the 11th edition of the symposium entitled “Current situations and challenges for the European wood based panel industry”. While this was not quite a record attendance, it was close, and showed definite growth over the previous two editions of this biennial event.

It all began with an evening reception on the Wednesday and 24 presentations were made over the course of the Thursday and the Friday morning. Sponsor Sasol provided an excellent evening event on the Thursday.

Based on the 335 pre-registered attendees, 31% represented panel manufacturers, with adhesive and chemical suppliers (19%); R&D, teaching, testing, monitoring and certification (19%); plant and measurement engineering (17%), as the other principal sectors.

The symposium was opened by Bo Kasal of Fraunhofer WKI and Kris Wijnendaele of the EPF.

Jens Kerstan, senator for environment and energy of the Free Hanseatic City of Hamburg, gave the welcome address.

The first technical presentation was given by Jan Bergmann of Sonae Arauco Deutschland on behalf of the EPF, using the symposium title mentioned earlier.

He said that the last two years had been good for the European industry, driven by economic recovery and robust construction with good labour markets and pay increases above previous levels. Plant utilisation and structural competitiveness had also been good.

However, Mr Bergmann reported that recent months had seen increasing clouds due to the global political situation, rising raw material and energy costs and “industrial challenges”. Also, he said, some countries are dissatisfied with the pace of the EU moving forward.

He ended with the EPF’s “Call for coordinated advocacy: across the industry; national and EU Advocacy aligned and coordinated; and integrated advocacy along the value chain”.

The next speaker was Tunga Salthammer of Fraunhofer WKI, looking at formaldehyde in ambient indoor air.

He pointed out that formaldehyde levels are increasing in the outdoor environment, for example from fuel emissions, and that indoor levels are increased by heating such as log burners, by saunas and even by candles, incense sticks and many other sources, as well as being affected by air exchange rates, of course.

He concluded: “It becomes clear that the political measures to limit formaldehyde currently face a dilemma. On the one hand, great efforts are being made to politically impose ever-lower limits on building product emissions and indoor air concentration, while on the other hand, secondary sources, both indoor and outdoor, remain unconsidered”.

Next came Torben Halbe from the German forestry sector, whose subject was How to communicate the scientific evidence that supports using forests for engineered wood.

He identified three pillars to getting wood’s message across: Public relations; lobbying; and internal communication.

During questions, Kris Wijnendaele said that he was increasingly finding that NGOs were in favour of the cascaded use of wood, and against the mass felling of trees for bioenergy, which, he said, is a positive step.

After the coffee break, Silvio Mergner of Pöyry Group took to the podium to talk about Panel production trends: will the role of (waste) wood change?.

He concluded that the share of high quality waste wood for particleboard production is increasing, but with capacity moving east [in Europe] this trend is less dominant overall. Additional volume appears available for particleboard, MDF and OSB.

Alfred Pfemeter and Raymond Loch, both from Sonae Arauco Deutschland, shared the platform for a presentation on novel 3-D wood based composites.

They explained how 3-D post-formable boards of MDF could be made by the addition of a thermo-plastic substance from BASF, via the blowline.

They illustrated both improved moulded shapes such as chairs (normally made in plywood) and 3-D relief in panel surfaces (normally routered).

Fabian Fischer of Volkswagen AG kicked off the afternoon session with a surprising, but interesting, talk about wood materials in structural automotive applications.

He concluded that wood and wood materials offer great potential for automotive applications beyond actual “design-only” elements (eg wooden beam fendes/ bumpers), but to exploit the potential, research in manufacturing technology, material development and the automotivespecific question of (long-term) material behaviour of wood materials is necessary.

Venla Hemmilä is a phd student working with IKEA and presented “A step-wise approach to lowering formaldehyde emissions”.

However, Ms Hemmilä pointed out, we must be careful not to substitute formaldehyde – a natural product anyway – with something worse and untested.

“We don’t specify measurement methods, but IKEA has a reference chamber and our boards must correlate with this,” she said.

“IKEA is asking the industry: ‘What would it take to reach half of natural wood emissions, 0.04ppm, as a cap value?’, said the speaker.

The final session of the first day began with Michael Wolff of Wolff Management Solutions, with his presentation on “Strategic planning and execution in the woodworking industry”. He was once ceo of panel maker Pfleiderer and now runs his own consultancy.

Mr Wolff was followed by Torben Marhenke of Leibnitz University, who presented his work on Non-destructive determination of wood based materials. He advised it was not yet possible to use his system in an industrial environment.

The final speaker of the day was Stefan Weinkötz of BASF and his presentation was entitled Just the two of us – a new hybrid binder for wood based panels.

He began: “At first glance, UF and pMDI are not really ideal components to combine…..nevertheless, they can act synergistically!”.

Mr Weinkötz concluded that Kaurit glue, plus Kauranat MS 1001 as a hybrid binder for the core layer of particleboard, can increase productivity by more than 20%.

With Joachim Hasch of Swiss Krono in the chair, the morning session kicked off with Sven Englert of Dieffenbacher giving his presentation on Big Data – Boost or Bluff?.

He began by explaining what ‘Big Data’ means, first socially: “Big Data is often used as a collective term for digital technologies that are technically credited with a new era of digital communication and processing, and responsible for social change”; and second, economically: “Big Data is the processing of data which are large in amount, complex, and changing with a high velocity”.

Mr Englert stated that: “The analysis of customer data is not necessarily ‘Big Data’!”.

He went on to outline the methods of Big Data analysis, or ‘Data Mining’ and gave examples of Big Data and artificial intelligence successes, and failures, in its use. Notable failures are Tay Bot, a Microsoft robot, which started sending offensive tweets and Alexis, which accidentally started a party in Hamburg, as well as mistakes in photo image analysis!

For the wood based panels industry specifically, Mr Englert said that Big Data could offer the following benefits: Reduce operating failures; give automatic control of certain processes; enable running of the plant closer to its limits; provide proper statistics; and give deeper insights into the process.

In a complete change of emphasis, the next speaker was Alessandro Guercio of ITI Engineering. His subject was The potential of biomass CHP in wood based panel production. The acronym CHP stands for Combined Heat and Power and ITI is a designer and provider of biomass power plants to the wood industry.

Having outlined the process of biomass CHP thermodynamics, the speaker concluded that the panel industry offers favourable conditions for biomass CHP. For particleboard and OSB, the drum dryers are replaced by low temperature belt dryers, while in MDF no modifications to the process are required, although a lowering of the heat demand temperature is desirable, he said.

The next speaker was Gregor Bernardy of Siempelkamp, who talked about selfoptimising panel plants.

He presented his company’s view of the future, in which it expects significant development in: Networked production with vertical and horizontal integration; virtualisation of plants using “digital twins” for simulation of actual lines; and Production Intelligence, meaning online performance monitoring and preventive maintenance and (model-based) online quality control. The virtualisation means that customers can see their line before they even place an order, said the speaker.

“You plan your production: board type/ quality; recipe; quantity production order; and schedule; and the machines carry out your order automatically”.

His proposal was Advachem CF01 additive. He said this comes in an aqueous state for ease of handling and safe use, while providing the treated panels with both fire resistance and low formaldehyde emissions. Panels’ physical properties, he said, were not compromised, and the additive can tolerate high platen temperatures, meaning that productivity is also not compromised.

Next to take the podium was Stefan Langguth of ACE GmbH. His subject was a novel method of producing lightweight structural panels using PUR foam-cored panels with OSB faces, in a continuous process. This is done by splitting the OSB in half through the thickness, as it leaves the continuous press, and ‘inserting’ the foam core. The sandwich is then passed through a continuous calibrating press. The process can be run at 30m per minute, he said.

Mr Langguth claimed the process is applicable to OSB, particleboard and MDF/HDF.

After a coffee break and some all-important networking, the symposium resumed with a presentation by Joris Van Acker from Ghent University entitled Moisture dynamics as a complementary factor to durability for service life prediction for plywood. He had carried out a series of scientific tests on plywood under various moisture conditions.

Mr Van Acker advised that no type of plywood so far made has sufficient natural durability – not even tropical hardwood plywood such as sapele based boards.

“However, oak and some tropical hardwoods do have high resistance to rot and also get less wet and stay wet for less time,” he said.

His ‘secret ingredient’, surprisingly, turned out to be leather shavings/particles produced by the thinning of tanned leather. This waste product of the leather industry was found to significantly reduce VOC and acetic acid emissions.

Addition rates of leather particles to softwood insulation board were found to be optimal at up to 20%. Impact on physical properties of the board were said to be “negligible”.

Martin Ohlmeyer of the Thünen Institute spoke on Emissions of VOC from materials, systems in model houses.

The final presentation of the symposium was given by Mark Meder of Fraunhofer WKI on Parameters influencing the cracking resistance of direct-pressed laminates.

It has only been possible in these pages to give brief résumés of the papers presented at this wide-ranging wood based panel symposium and the author has tried to give more information on those he feels particularly relevant to our readers.

However, if you would like further information on the symposium, please contact the Fraunhofer Institute for wood research WKI (www.wki.fraunhofer.de), or The European Panel Federation EPF (www. europanels.org). 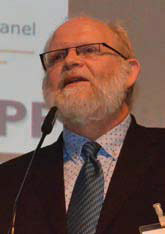 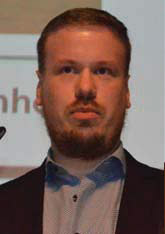 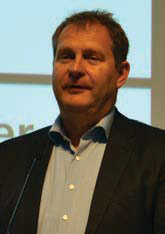 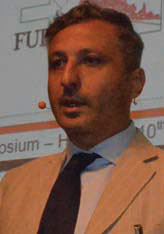 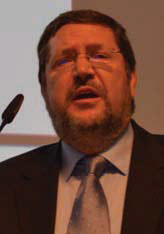 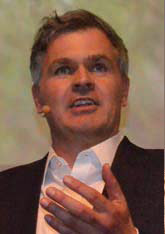 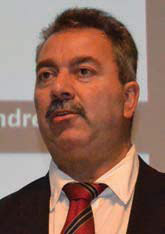 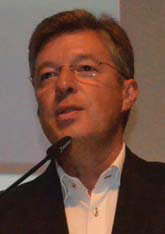 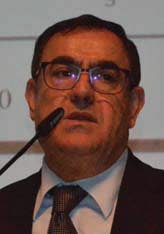 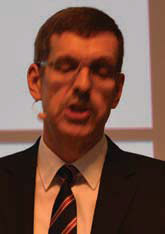 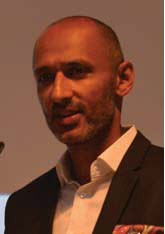 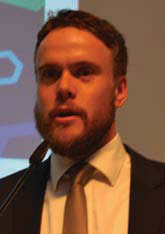 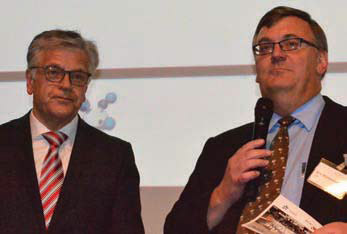 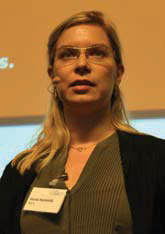 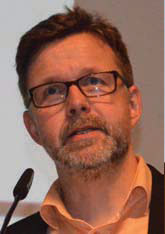 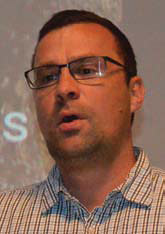 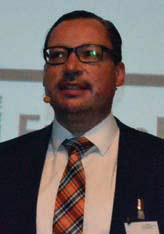 The delegates during a presentation 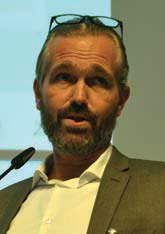 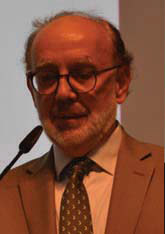 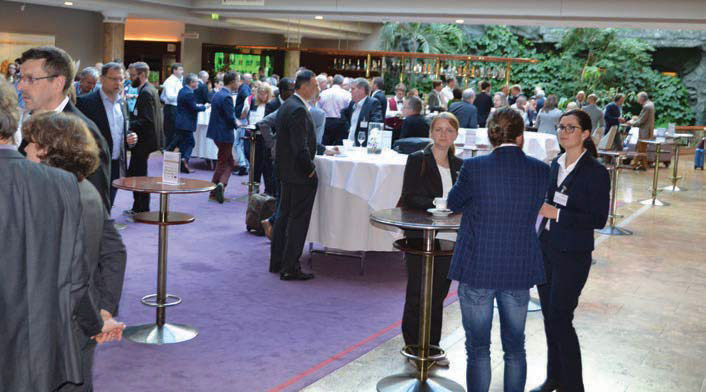