The Pagnoni company was established in 1848, even before the state of Italy, when it made presses for the food industry. Over 160 years on, Pagnoni is still family-run, and still making presses, although now they are for panels, as Mike Botting reports.

The company still makes single-opening press lines for primary particleboard, MDF and OSB production, but today specialises in machines for the value-adding end of the market, particularly short-cycle press (SCP) lines for the application of melamine papers, or other decorative surfaces, to panels.

"In addition to high-capacity SCP lines, in recent years we have also been focused on designing and manufacturing presses particularly for developing markets, with simple lines designed to start up in a short time," said Michele Pagnoni. "This means regions such as Iran, north Africa and the far east regions of Russia, where there are less skills in the maintenance and running of such lines.

"We have also had some success in the highly competitive markets of China and India, to which we have supplied several projects with short-cycle press lines, under the name of SmartLine and Selecta."

However, one of the company's most recent innovations is the development of a system to produce in-register embossing in its presses, in which the texture and feel of a wood grain decor, for instance, is replicated.

"At first we thought it was just a fashion, but everybody seems to be asking for it, so we decided to develop the technology," explained Mr Pagnoni. "It was not easy, but we established a subsidiary for electronic engineering to work on this project as a new 'leg' for the company. We wanted to focus on high-tech solutions as well as the heavy engineering of the press lines.

"It is still a niche market to some degree, but we are confident it is going to grow. It has taken some months of work to bring it to the market."

Pagnoni has just installed a large plant for SIT in Mortara, a panel manufacturer in the large Italian Saviola group, to produce particleboard base panels with this embossing in the decor on both faces. This is important in furniture such as book cases, where both faces are exposed to view - and to touch. The panels employ a Kraft paper base under the decor to give more depth for the embossing.

This deep embossing also required that the pressure in the previously-supplied SCP be increased from 35 to 50kg/cm2.

"Because the particleboard itself is pressed at around 35kg/cm2, we had to devise a system to adjust the pressure during the press cycle to avoid 'squashing' the particleboard," explained Mr Pagnoni. "We have always worked with big safety margins in our presses, so we were able to increase the pressure simply by modifying the hydraulics - the press could already support that increase."

Mr Pagnoni added that the company had also improved the technology in its HPL presses, particularly from the electronic point of view. "We have a very accurately controlled press throughout the cycle, with proportional valves to control the pressure in a very small range. Arpa, an Italian HPL producer in the Trespa group, has one of these systems in operation."

Pagnoni also produces its continuous press, Easylam, with a 40m/minute capacity and a pressing temperature of 100-160oC, to apply veneer to panels and to produce engineered flooring panels.

"We are always looking for new markets in terms of geography and products and are always updating our technology to serve the latest demands of the market," concluded Mr Pagnoni. 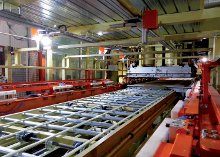 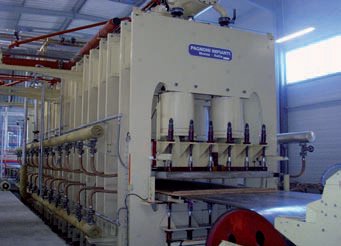 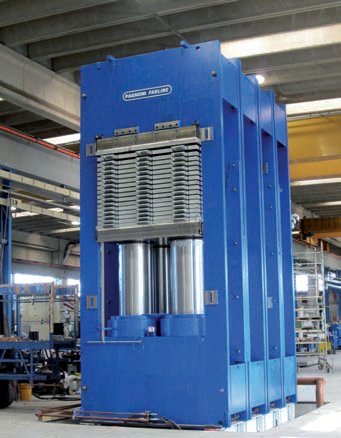 16-daylight press for HPL and CPL