Our expert industry economist, Bernard Fuller, looks at China and assesses the economy, market and panel sector there.

Despite the on-going negative news about the slowdown in the pace of expansion in China's economy, growth still exceeded 7% in 2014. In turn, this expansion was reflected in further large increases in the consumption of all types of wood products in 2013-14, particularly of wood based panels.

Last year's discussion of the outlook for China (Wood Based Panels International, February/March 2014) focused on the revisions to economic expectations for China. China forecasts have continued to be revised lower over the past year and the impacts of these downward revisions are clearly shown in Figure 1 and Table 1. Growth of around 7.3% for the whole of 2014 compares unfavourably with 7.7% in each of 2012-13 and the better-than-10% rate recorded for 2010. In addition, 2014's growth will be the slowest since 1990. Forecasts call for sub 7% growth rates in 2015 and 2016 as China continues its transition towards a consumer-led, rather than an investment-driven, economy.

These projections could easily prove too robust and there is a growing probability that at some point in the next five to 10 years, China will experience a year or two of negative growth as the cyclical forces typical in a more developed economy take hold. Such an outcome is more likely if domestic financial instability in China, resulting from an abundance of non-performing loans, is greater than anticipated.

However, North American and European readers should not lose sight of the fact that China continues to grow, and that annual growth rates of 5-7% are highly enviable compared with the performance of most developed (and developing) economies in 2014-15. 7% annual growth means a doubling of the size of China's economy in just 10 years! Consequently, 5-7% Chinese growth rates are relatively very healthy and will have substantial beneficial impacts for the rest of the world.

The good news is that China's future growth will support substantial increases in demand for all types of commodities and manufactured products, as well as higher demand for services such as tourism, as China's middle class swells.

The bad news is that the slowing growth pace is a problem if commodity suppliers, globally, based their investment decisions for new facilities (mines, farms, forests, etc) assuming continued double-digit growth rates in demand from China. Increased global capacity designed to supply a market that does not exist currently (and may not exist for another decade), along with weak overall global demand growth, is what has been driving the collapse in commodity markets, particularly for industrial products such as oil and metals.

Commodity super cycles are nothing new in economic history and the current crash in prices has yet to fully play out. However, at some point, commodity markets will again climb as the demand/supply balance tightens. But such a rebound is unlikely to happen for several years, unless global economic growth is far faster than anticipated through the rest of this decade. Thus we will be living in a buyers' market for several years, enjoying, among other benefits, relatively low petrol and diesel prices. Falling prices, however, create their own set of problems.

Deflation, and growing deflation expectations, could easily hinder future economic growth. In other words, Japan's economic experience of the past twenty years could expand to a global scale and result in a vicious downward spiral.

While the current overall excess supply of industrial commodities is a direct result of double-digit Chinese growth early in the 21st century - plus the expectation that such growth would continue indefinitely - the situation in forestry and forest products markets may be somewhat less extreme. Higher prices and growing demand from China have boosted the log trade with China from New Zealand, North America and Russia. China's persistent shortage of domestically grown timber will mean that this trade will not disappear anytime soon.

The plunge in the value of the Russian ruble will make Russian log and lumber suppliers even more competitive in China in 2015-16 and this development could displace other suppliers.

Nevertheless, higher domestic inflation in Russia (resulting from a jump in import prices), as well as physical limitations on access to the forest (primarily because of the lack of adequate infrastructure), will eventually erode Russian competitiveness and cap its ability to take advantage of opportunities in the Chinese market over the next five years.

Slower demand growth, plus increased supplies of timber from fast-growing plantations in Brazil, Indonesia and other developing countries, in addition to China's own poplar and eucalyptus plantations, will also moderate pressure on timber prices. And these pressures may be sufficient to result in lower inflation-adjusted timber prices in the near-to-medium term (viz US West Coast prices dropped during the second half of 2014 after jumping in 2013).

For China's wood products industry, the rapid expansion in capacity among plywood, MDF/HDF and particleboard producers over the past 20 years has resulted in relatively low operating rates and highly competitive pricing. These factors prevailed despite the upward pressure on wood and chemical costs over the past several years, which squeezed margins, particularly for older and less-efficient operations. Continued relatively strong growth in demand and output will more fully utilise in-place capacity, but what remains unknown is the pace of future capacity investment.

How long will Chinese investors persist in their past approach of building panel capacity in expectation that sufficient demand will be present when it opens?

The transition to slower (and slowing) growth, together with growing domestic costs of manufacture, and structural shifts within key end-use markets (especially home construction and furniture production), will result in lower overall growth of wood based panel demand.

China's housing market
Underpinning the China wood panel outlook are the forecasts for construction (residential and non-residential), residential repair and remodeling and industrial production (particularly furniture). China's housing market has been in the doldrums over the past two years, following over-building earlier this decade. The result has been falling home prices in order to clear the market overhang.

While progress was made in 2014, the overhang has not been totally cleared and new home construction has been weak. After dropping in 2014 by 2.3%, housing completions are projected to climb modestly in 2015-16 as easier lending conditions attract buyers back into the market (Table 1). However, as many of these completions will be of units whose primary construction was started several years ago, the increase in sales and completions activity will boost new construction activity only modestly in 2015.

Government programmes for low-income housing are likely to push higher the number of units constructed, but given the smaller average size of such units compared with units built for sale rather than for rent, little change is expected in the average annual volumes of residential living space completed.

Over the next decade, housing production will slide as a large and growing portion of the population will find themselves living in relatively modern accommodation. Support for housing starts after 2020 will increasingly be derived from the upgrade market, that is by people looking to move up from relatively small to larger units with higher quality construction and finishing. If this assessment concerning upgrade potential proves inaccurate, then we should expect an even faster decline in the volume of new residential construction in China. In addition, greater cyclicality in housing markets is to be anticipated by the end of the current decade and this will have important consequences for wood panel producers and the market strategies they adopt.

China's furniture industry
Furniture production continues to be an enormous source of demand for wood panels. Revised data indicates that China's furniture output jumped over 20% in 2013, but that growth slowed to 8.5% in 2014. Nevertheless, over the five-year period 2010-14, China's furniture production growth rates averaged 15.6% annually (Table 1). Much of this growth went to meeting increased domestic demand, rather than export markets. In addition, a growing proportion of China's furniture is now manufactured away from the coastal region in China's interior and western provinces in order to take advantage of lower wages and a relatively abundant pool of labour.

By US and European standards, the forecast for furniture production growth of around 9% per year in 2015-6 seems very robust. This projection marks a considerable slowdown from the recent past, but the risks are still more on the downside than the up over the next 10-15 years.

Inexorably rising labour costs and growing competition from elsewhere in Asia will result in growing Chinese furniture imports, declining exports and, eventually, in an overall drop in total Chinese furniture output, particularly after 2020.

Meanwhile, the projected increases in furniture production will continue to boost consumption of wood panels through the end of this decade. However, the annual growth rates in panel production will ratchet lower as the key end-use markets of furniture and home construction pass from young adulthood to maturity and start to approach old age!

Temporary rejuvenation of these markets may happen sporadically, given the right economic conditions, but the cautious investor should not count on such an outcome and the timing will be difficult to call.

China's panel production
One year ago, we discussed the problems associated with China's reported production data. These problems continue to exist (so far no revisions to history have been reported by China's State Forestry Administration, SFA). Table 2 and Figure 2 compare data back to 2006 for production as reported and as revised by CFPA and RISI to better reflect the 'real world' as we understand it. Problems are particularly acute with reported plywood production (for 2013, we estimate the reported plywood production data are overstated by more than 100%), while the reported production for other panels is closer to reality (for MDF/HDF we estimate production is over-reported by just 13%). At 160.7 million m3 in 2013, total revised panel production is 33% lower than the 241.3 million m3 reported by SFA.

Given the revisions to the historical data, plus the assumed growth in China's economy, construction markets and furniture production, panel production in 2014 was estimated to have jumped 8%, to 173.5 million m3. This volume was 141% higher than the 71.9 million m3 produced in 2006. Of the total estimated production in 2014, 41% was plywood, 36% was MDF/ HDF, 13% particleboard and 11% blockboard (Table 2). Over the next two years (2015-16), total panel production is expected to jump by another 25 million m3, with particularly strong growth in particleboard and fibreboard output (Figure 3). Lastly, total panel output is expected to represent approximately 80% of China's production of all panels and lumber; a far larger share than in North America, where lumber continues to dominate wood products markets.

China wood panel exports set record
In recent years, trade has been a relatively small proportion of China's panel market, with a few notable exceptions. Panel imports in total are almost too small to measure (running around 800,000m3 for all panel types in 2014). However, exports are much more significant and represent around 9% of the total demand for Chinese manufactured wood based panels. For 2014, CFPA estimates total panel exports around 15.45 million m3, up 14% over 2013. (The 2014 totals may be somewhat over-stated, given changes in how panel trade data are reported by China). Of this total, 74% was plywood (11.4 million m3, 16% above the 9.8 million m3 exported in 2013 and an all-time record). Meanwhile, MDF/HDF accounted for 22% of the total (3.4 million m3; 5% higher than in 2013, but still below the 2012 peak). The remaining 4% was of blockboard, particleboard and OSB combined.

Clearly, China's plywood industry continues to be very successful in global markets, but it remains to be seen whether further significant growth is possible, given slowing global economic activity and rising concerns about the "greenness" of Chinese plywood in international markets. Certainly, economic challenges and an uncertain international political environment will be pressing problems in 2015 and China's panel producers will be hard-pressed to sell increased volumes into global markets in 2015-16. 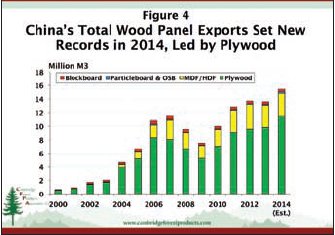 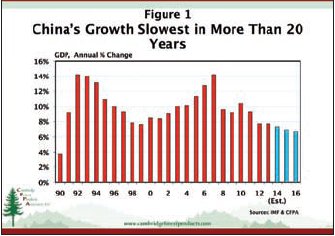 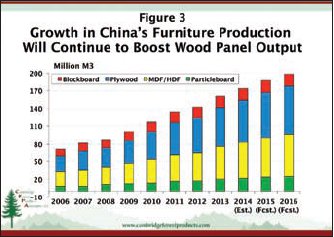 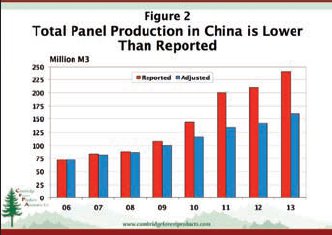