Panel maker Aglomerados Cotopaxi has seen a sudden eruption of investment activity in the past 18 months, much of it beyond the borders of its native Ecuador, says Richard Higgs in the first of his reports from the region.

Aglomerados Cotopaxi, which takes its name from an active Ecuadorian volcano, is already recognised for its quality pine MDF and particleboard products across the Andean region. But in recent months its parent company Gem Corp has branched out, purchasing two ailing panel producers; one in Guatemala and the other in Uruguay.

In addition, Quito-based Gem Corp plans to take advantage of Cotopaxi's maturing forest base to launch its first continuous-press MDF line, with a capacity of 250,000m3/year. This should be up and running by late 2015. In July, Gem Corp was on the brink of placing an order for the line with one of Germany's two big machinery suppliers, Federico Arteta Durini, its executive director told WBPI in Ecuador.

At its 23ha Lasso industrial site, high in the Andes mountains, Cotopaxi still runs two small single-opening press lines. One, for particleboard, dates back to the late 1970s while the other, for MDF (unusually with two separate secondhand Pagnoni presses), was launched in 1997. Today, the line capacities are 42,000m3 and 85,000m3/year, respectively.

The Gem Corp chief executive readily admitted that Cotopaxi needs to modernise its industrial base, although he stressed that process improvements over the past decade mean the old board lines are now "very productive" and cost-competitive.

"It's now time for us to upgrade our Ecuador plant because in two more years we will be able to harvest twice the wood we are harvesting [currently] from our own plantations," Mr Arteta explained. The group may put in a new sawmill at Lasso, too.

Today, the firm has 12,000ha of plantation, primarily radiata and patula pine trees, in the highlands around the 6,000m-high Cotopaxi volcano. Of that, 6,000ha is already being harvested. The rest will soon be mature and the firm aims to double its cutting rate to nearly 800ha per year.

The family-run group began life 70 years ago as a modest sawmilling business, making and retailing solid wood furniture and construction products such as doors and flooring. It later evolved into a plywood, particleboard and MDF producer.

Business integration, and a strong focus on developing its retail outlets have ensured the firm's survival, even in today's fiercely competitive panel market.

"If you're not one of the big [board] producers, like Arauco, Duratex or even Masisa, you must vertically integrate or there's no future for you, at least that's the way we see it," said Federico Arteta, grandson of the firm's founders.

Remaining independent as a wood panel producer is very tough these days "if you don't get scale and are not very, very competitive", he argued, pointing to several small-scale regional producers recently crippled by debt and struggling to survive.

Gem Corp has consolidated its own market position through rescuing two such businesses in Central and South America: It bought the assets of indebted Guatemalan particleboard producer Maderas El Alto in December 2011; and then the bankrupt plywood and thin MDF maker Urupanel, in Uruguay, early last year.

Based on its success in Ecuador as an integrated, retail-driven, company the group began to export. It focused on its "natural markets" in the neighbouring Andean states of Colombia, Peru and Venezuela, although, following political developments in Venezuela, its plans there did not work out.

Key to its original success was the group's EDIMCA wood products retail chain, which today has 30 of its own stores throughout Ecuador. In the 1990s, Cotopaxi set up a retail business in Colombia with local partners and has gradually opened more of its 'Madecentro' stores across the rich Colombian market.

Then, seven years ago, the Ecuadorian group bought into a Peruvian retail company and has already established 18 of its 'Castor' wood product outlets, centred on Lima.

As Cotopaxi went about securing its place in Andean markets, it was on the lookout for opportunities further afield. Keen to get a foothold in Central America, it took advantage of a family dispute to pick up a 30,000m3/year particleboard line from the Guatemalan firm Alianza Estrategica (formerly Maderas El Alto) for around US$12m, including its debt.

"It was a small investment to get our feet on the ground in Central America and allowed us to begin a retail chain in that region," Mr Arteta told WBPI. Now we have six stores of our own - one in each country of Central America."

Keen to integrate, the Ecuadorians are capitalising on Guatemala's good Caribbean pine growing conditions, and an expected surge in local plantations, thanks to a state reforesting incentive scheme there.

The local particleboard line is now running full out and a formerly loss-making business is already in profit. Most of its panel output, selling strongly in the market, is now melamine faced.

Gem Corp is planning some serious industrial development in the region, once its local retail chain is fully grown, its ceo said.

The Cotopaxi group also had its eye on developments down south in Uruguay, where it saw forestry activity "explode" in the last decade, driven on by government planting incentives.

Another opportunity arose when Gem Corp was called in by creditor banks of the debtridden panel producer Urupanel. The group was persuaded to buy the business out of Uruguay's equivalent of Chapter 11.

Nine-year-old Urupanel, whose single plant at Tacuarembó ran a continuous 75,000m3/year MDF line and an 80,000m3/year plywood line, had a huge US$40m debt, which the banks agreed to cut by two thirds, revealed Mr Arteta. Gem agreed to pay off the reduced debt, along with an undisclosed sum to the Swiss investment firm which owned Urupanel.

The formerly Chilean-owned panel maker once had a good forestry business, but this was disposed of prior to the takeover. Gem, which found both panel lines in a poorly maintained state and the MDF unit incomplete, has invested US$5m in working capital, maintenance and a plant upgrade.

"We're now producing five times what they were doing when we bought the operation. We had to renew the wood preparation section of the MDF line and need to invest more to reach its nominal capacity," reported Mr Arteta. But the pine plywood line is almost running at capacity now, he added.

Of particular value to Gem Corp is Urupanel's specialisation in thin MDF panels, providing an opportunity for it not only to broaden its product portfolio, but also to compete with thin MDF imports from China.

Along with Urupanel's pine plywood, the new owners expect to sell its MDF in a number of promising Latin American markets other than Uruguay. Among these are Paraguay, Bolivia and Peru, as well as Colombia, Central America and Ecuador.

In both Guatemala and Uruguay, the Ecuadorians are looking to invest in the forest resource, growing the plantation base, according to Cotopaxi's forestry manager Felipe Pazmiño.

Looking ahead, the Cotopaxi group's overall strategic plan is focused on growing its network of retail outlets, especially in Peru and Central America, while pressing ahead with the MDF expansion project at Lasso.

One key market in northern South America is the sizeable and growing one in Colombia - it has a population of 50 million. Gem Corp already has a network of 70 'Madecentro' retail stores across the country and holds more than 10,500ha of forest land; almost 7,000 ha of it ready-planted and with a sawmill.

However, the group remains reluctant to integrate further by launching production there, either independently or via a partnership. In the past, it contemplated joining forces with one of Colombia's two top panel makers, Tablemac or Pizano, but nothing came of this.

For Gem Corp there is a significant downside to launching a panel plant in the country now: at the heart of its reluctance lie the potentially high production costs, largely due to Colombia's expensive wood and electricity; and extremely poor transport infrastructure.

All this adds substantially to the cost of the board and, while the domestic market remains attractive, trying to export from there would be quite unrealistic, he argued. Mr Arteta does concede Colombia's 50-year history of violence, terrorism and civil unrest has inhibited investment in its infrastructure.

But could it be that Gem Corp feels aggrieved that it lost out in Colombia after Tablemac finally agreed to partner with the Brazilian wood panels giant Duratex?

Definitely not, stressed the group ceo. "We consciously decided, before Duratex went in, that we're not going to do anything industrially in Colombia yet," he said.

"Colombia has to develop in order for us to go there. We don't feel this is the right time to go in because it's just not competitive internationally," he added.

Back in Ecuador, Cotopaxi has put a great deal of effort into enhancing its raw material base, making significant changes in its silviculture, both in the process and management. The firm has expanded both production and the area at its central San Joaquín nursery, where it can produce 3.6 million plants.

"This year, we're going to produce three million plants there for our own consumption and also for sale," stated the forestry chief Felipe Pazmiño.

In common with other panel makers in Latin America, Cotopaxi uses some eucalyptus fibre in its board production. The company is considering investing in new land in Ecuador's lowland coastal region, where it can develop new plantations for eucalypt forest, which will grow twice as fast as the highland pine.

In recent years, Cotopaxi has focused on optimising efficiency and process output across the business, not least in the Lasso production plant. The work, including process management through the use of the '6 Sigma' system, has boosted both particleboard and MDF capacity.

In the case of MDF, since the line was installed in the mid 1990s, its capacity has risen from 60,000m3/year to the current 85,000m3/year, pointed out production manager Mauricio Heredia.

Cotopaxi did invest in several significant capital projects at the plant, notably the construction of a one million US dollar water treatment plant, put in four years ago. A year later, it installed two lines for preparing veneers for lamination and in 2012 a new 4,000m3/month Wemhöner melamine press.

Today, Cotopaxi surfaces around 70% of its MDF and particleboard output with melamine, but still turns out some panels with wood veneer or finish foil laminates, using its old 2,500m3/month Siempelkamp press line.

Eighty percent of its particleboard is sold on the domestic market, with the remainder, because of its quality, exported to Peru. In the case of MDF, only 40% is taken by the Ecuadorian market, while the bulk is sold abroad in Colombia, Peru, Bolivia, Venezuela and Central America.

With the latest flurry of foreign investments, and its bold MDF expansion plan, this family-run group has certainly raised its regional profile and seems poised for promotion to a higher league in Latin America's volatile panel industry. Harvesting pine at an Aglomerados Cotopaxi plantation in Ecuador. Mechanisation in 2010 released 70 workers for other duties. 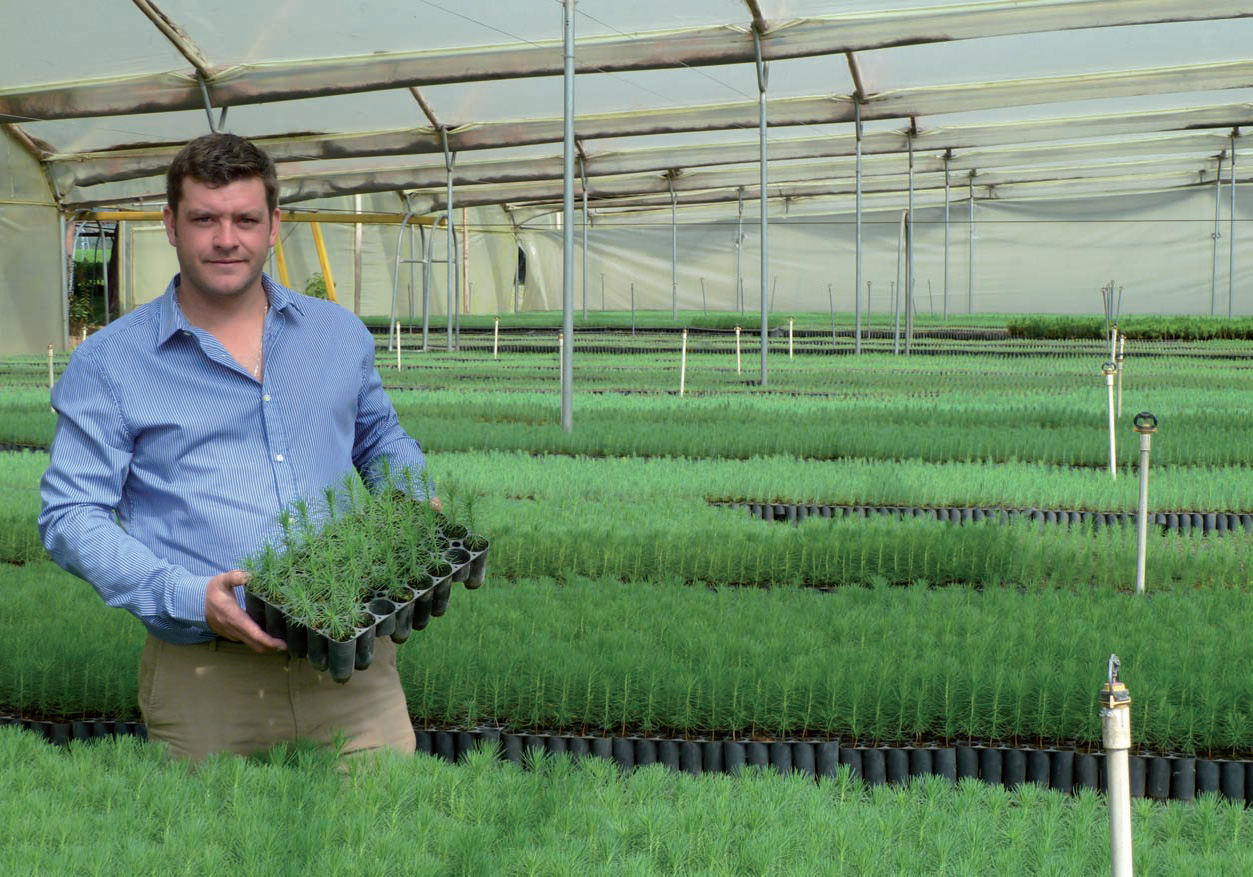 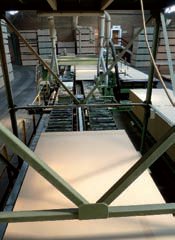 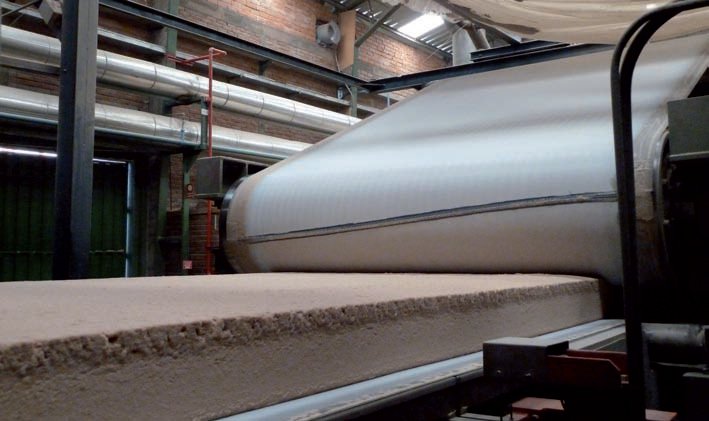 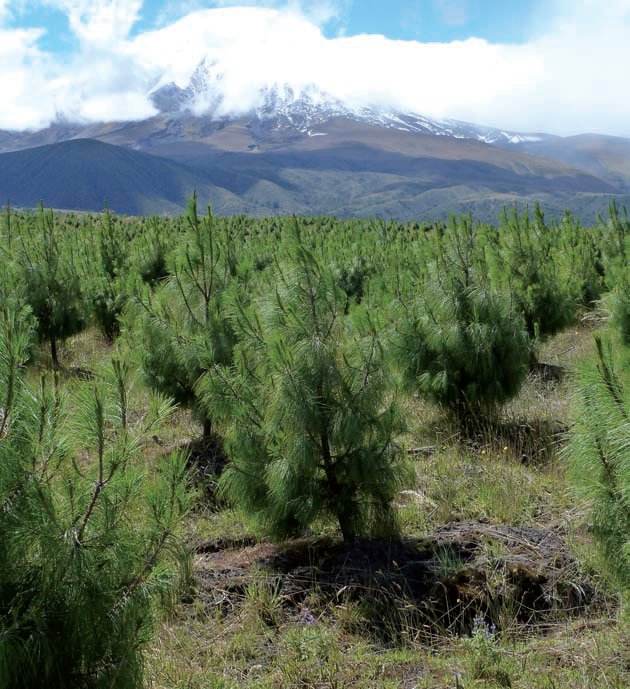 Young radiata pine trees growing at around 3,000 feet at an Aglomerados Cotopaxi Andean plantation below the snow capped Cotopaxi volcano.