Italian power technology specialist Turboden is a new company on WBPI’s radar for our annual Focus on Italy and one that has been coming up with novel solutions for the wood-based panels industry. Stephen Powney spoke to Simone Passera, Turboden’s sales and business development manager

Turboden was founded in 1980 by Mario Gaia, current honorary chairman, as a spin-off from a university project in Milan, which looked at testing different working fluids and applications for organic ranking cycle (ORC) power technology in the biomass and geothermal arenas.

One of the primary characteristics of the Turboden solution is it does not use water as the working fluid.

The company remained small for its first 20 years and focused on pilot projects and R&D initiatives with universities. But the milestone was Turboden’s first commercial biomass plant– a 300kW co-generation plant for the Swiss Army in Switzerland.

“This was the first commercial plant in the world using a thermal oil boiler associated with power generation in biomass and using ORC technologies – the know-how of Turboden,” explained Simone Passera, sales and business development manager.

A growth period started in 2000 with lots of business initially in German-speaking countries at sawmills, pellet producers and other wood manufacturing businesses.

“In those years we achieved 100 reference projects very quickly, so it was a boom. It was the right product at the right time, in particular in biomass applications,” said Mr Passera.

Central Europe was the first region to pay attention to renewables such as biomass, helped by targets for CO2 emissions, the requirement for combined heat and power (CHP) generation, the wood industry’s readily-available source of good quality wood waste for fuel and the possibility to sell electricity to the grid with a subsidised feeding tariff scheme.

Turboden’s solution found a ready market for small family companies who did not want the expense and complexity of a large steam-driven power plant.

“Our solution is automatic, easier, lower maintenance and with no need for skilled personnel. So in essence this technology gave the opportunity for small businesses in the wood industry to have their own power plant to produce their own electricity for their own consumption or to sell to the grid and produce their own heat they use in the process,” said Mr Passera. Turboden was acquired in 2009 by United Technologies Corporation’s (UTC) Pratt & Whitney power systems division, which helped it expand from core European markets to overseas – particularly North America – as well as expand applications to geothermal and heat recovery from industrial processes, plus the sizes of plant it could offer.

A subsequent acquisition occurred in 2013, with Mitsubishi Heavy Industries taking a 51% stake in the business.

“Thanks to the name and reputation of Mitsubishi we could consolidate our market worldwide,” said Mr Passera.

Today, Turboden has a €70-80m turnover and employs around 200 people. Of 300 plants Turboden has done in biomass in up to 45 countries, more than 95% are CHP, with outputs ranging from about 300KW up to 8MW (pellet plant in the US), though 15MW plants are feasible.

Its facilities comprise a headquarters and warehouse in Brescia, in Italy, with a bigger factory a short distance away where assembly takes place for its core components – the turbine, control system and the lubricating system. For bigger projects overseas the company purchases some components from its supply chain worldwide.

Turboden wants to see a greater level of applications in the wood-based panels industry and is focused on extending its reach in this market.

Its good success in Turkey includes important reference projects with the likes of Kastamonu Entegre in 2014, Starwood in 2017 and AGT in 2019.

The Kastamonu project was a 1MW electricity CHP plant, with hot water used at 90OC in the production process.

The Starwood project at the MDF/ particleboard Inegol plant is a 5.5MW electricity generating CHP plant. A combined 28MW of heat by means of hot water at 110OC is used in different ways in the process, with about 10-18MW in the particleboard line belt dryer and in MDF production for preheating of the air before the mixing chamber.

“This is a very good reference in terms of size and for the efficiency of the plant,” Mr Passera added.

The 5.5MW reference for AGT in Antalya was part of a larger site investment involving a new MDF line to increase capacity.

The biomass boiler installed was oversized in order to provide the thermal oil needed for the press and in parallel to feed the ORC module solely for electric power production to maximise the electrical efficiency.

Characteristic of the installed ORC module is an integrated air-cooled condenser system, which avoids the need for a cooling water circuit and its heat dissipation system (usually cooling towers).

While Turboden has such references in the panel sector for co-generation plants with a temperature of 70OC-120OC, these temperatures were not high enough for producing saturated steam for some processes of the production line.

Turboden has developed a new product in recent years, which while still focused on the ORC principal, uses a different working fluid.

“We are now able to increase the temperature of our cycles, which means we can generate a higher temperature medium so now we are able to generate in CHP mode not just the 110OC of hot water but also saturated steam, with 30bar pressure, which means with this improvement we can say our product is more suitable also for sectors and fields of application where traditionally we would not be effective,” explained Mr Passera.

“Plywood production is particularly suitable because the temperature they need in the process is typically lower than in other fields – saturated steam at about 180OC.”

Until now Turboden’s solutions for heat and power generated for panel factory processes have focused on producing hot water and electricity for items such as belt dryers, with references at the likes of Modern Lumber Technology, Russia, as well as Alphawood in Greece and Ipan (OSB) in Italy.

It is currently looking for its first application of this high temperature cogeneration integrated in the wood-based panels industry production process.

Turboden also sees another interesting opportunity in existing lines where there is an excess capacity of thermal oil.

“In some cases, wood-based panel producers have an extra capacity of thermal oil (for the press) where they have to reduce capacity,” said Mr Passera.

“But if you operate the boiler at partial load (typically less than 50%) the boiler does not work properly so you fall foul of pollution limits, so the producer is normally forced to operate at a higher capacity than they need.

“In that situation we can propose an ORC unit without doing a new biomass boiler. We can take advantage of this surplus oil and produce electricity for the plant.

“We are in discussion for some projects because it is more common than we thought. There are cases when this is exactly the situation and it is also a lower capital expenditure.”

Lobbying for the biomass cause

Many countries have had high feed-in tariffs which have supported project viability, allowing companies to earn good money from selling electricity to the grid.

While there are still supporting schemes in some world regions, Mr Passera says there is less European support for biomass compared to other renewables.

“If a government has to show it is pushing on the renewables it shows photovoltaic and wind farms, it does not show a biomass plant because there is a chimney and you have exhaust gas, despite the carbon neutrality of biomass.

“In our company and with other associations in Europe – for example Bioenergy Europe– we are fighting to make the public and politicians aware of the benefits of biomass from the environmental point of view but also as an industry.” Mr Passera says there is ongoing complex discussion on the issue.

“With biomass you can provide a base load production, which means you can programme and give stability to the grid, whether it is day or night, irrespective of the environmental conditions so it is valuable for the grid,” said Mr Passera.

“With biomass you can produce in co-generation mode. And do not forget about environmental benefits due to the valorisation of by-products, wood waste and agro residues that otherwise would end in landfill or, in the worst case, combusted in open air.”

On the subject of Covid-19, Turboden says that while the pandemic has been a shock for everyone, the diversification of the company’s business over the years has given it a solid business base.

“We never stopped our commercial activities,” said Mr Passera. “We continued to do our jobs in a more virtual way and it has been more effective than I expected.

“Another point is our projects are medium to long-term. We haven’t seen such bad results in our work pipeline because they were projects that were already ready.”

“We are pretty confident that the targets for CO2 emissions reduction will give us support in the renewables sector. In Europe there is the target for complete decarbonisation by 2050. We remain confident and optimistic for the future.” 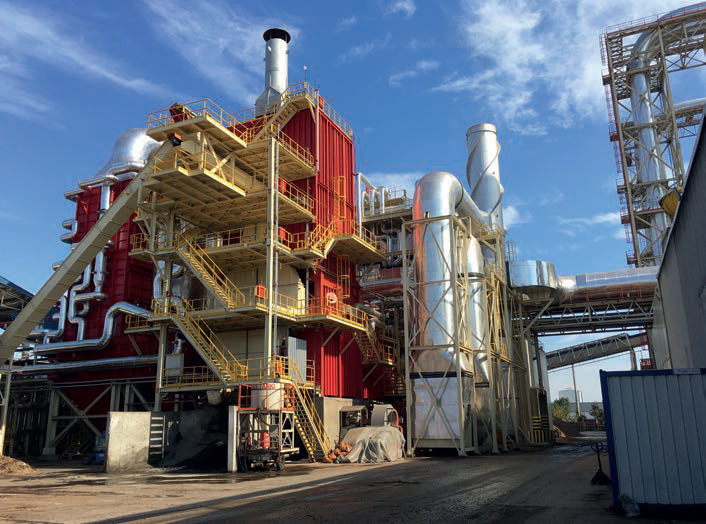 A Turboden installation at Starwood, Turkey