Novopan del Ecuador SA is a wood based panels producer that has been making a name for itself in the South American Pacific Coast region.

Medium density particleboard (MDP) is its key product and a large range of finishes, colours and sizes has helped differentiate itself in the market with the brand Pelíkano and with a big focus on customer service.

The company recently completed installation of its second MDP line at Quito, doubling its production capacity to 600,000m3. The move signals a key point in its growth plans as it seeks to expand in the Pacific Coast region of Latin America and look further northwards to tap the US market.

WBPI caught up with Cesar Alvarez, Novopan del Ecuador’s CEO, to talk about the project and the company’s growth plans.

“It was a very successful project in the way it has been executed and in the time installation was completed,” said Mr Alvarez.

“We have worked very hard in getting this project going and the whole team has done a very good job,” he added. “We have worked with seven different suppliers and with our know-how – this is very important in bespoke projects, so we were able to do this project on time and in budget.”

The first board celebration took place at the plant on June 12.

The MDP original small plant had a 40,000m3 annual production capacity based on a Pagnoni single opening press. This was followed in 2007 by investment in a Metso short continuous press with a daily capacity of 400m³.

Dieffenbacher began working with Novopan soon after the Metso line was installed, as Metso sold its wood based panels equipment business to Dieffenbacher in 2008.

Between 2010 and 2013 Novopan extended the press with Siempelkamp and made modifications in the forming stations and to the board handling system with Dieffenbacher to increase the capacity to 1,000m3 per day. Imal installed Dynasteam fibre mat steam injection and Dieffenbacher a EVOjet

The fact that Novopan could reach such a high capacity and efficiency from a relatively short press is an ongoing source of pride for the company.

Work on the second line commenced in December 2018 and saw the participation of seven different technology suppliers, with Dieffenbacher’s involvement including a forming station with conveyor system starting at the forming line with pre-press, an 8ft x 20.5m CPS+ press system, a raw board handling system and a stack and transfer system.

Novopan’s expansion represents Dieffenbacher’s sixth new plant project in Latin America in four years. Imal and Pal systems were also involved in the project, with the former supplying the gluing technology for the line.

Mr Alvarez said both lines are producing very similar boards and the company is working on reaching the efficiency levels of line one in line two.

Investment in finishing lines has continued apace, with a fourth melamine line – supplied by Wemhoner.

The company now has a melamine capacity for 100% of its MDP production.

The plant investment combined with its forestry operations and expansion, will represent a total investment of US$100m.

Novopan claims to be the largest producer of MDP in the Pacific Coast region and it believes it is one of the most efficient producers.

“We do not try to be the biggest but to be one of the most efficient producers,” added Mr Alvarez.

Mr Alvarez reported that Novopan del Ecuador has been achieving its sales targets.

“We have been fulfilling our targets and more,” he said.

“Our growth has been as a reliable supplier to customers, having a very short delivery time and producing what customers expect from us. Service for us is a very important part.”

The company has a market-leading position in the Pacific Coast region of Peru, Colombia and Ecuador, with its own office in Peru and Colombia and Pelíkano experience showrooms in Lima and Quito.

With its expanded production capacity, Novopan is looking to spread its wings further.

“In the US we are just developing the context of how we service that market. We are not trying to implement exactly the same thing in different markets.”

To date, Novopan has supplied small quantities to Florida and the Gulf area. “But now we want to grow our options of short delivery items to the region. We are working with different importers in the region. That is really a big new market for us.”

“All the economies in the Pacific Coast have not been growing at the rate we would like them to be growing.”

A big believer in melamine boards, Mr Alvarez said the product had good growth potential in Latin America and the US.

“Melamine is not a big product in the US but once they get used to it they prefer it and find it a better product. In the US, the range and colours of products tends to be very limited. But there are many new customers who want to follow the trend in Europe, with more options.”

The large number of readily available colours, finishes and sizes offered by Novopan with its brand Pelíkano is something it sees as one of its strengths.

“In Latin America there are still a lot of people who have not used melamine boards, so we are trying to develop the market by showing them how to cut the material and how to edgeband. It’s also getting people to know about the durability of MDP and melamine boards and communicate its advantages over other products.

“We have spent many years developing and making the market grow and we are also developing the uses of MDP, which is a very good board for painting and for many uses today that substitutes MDF.”

Last but not least is the development of forestry operations by Novopan. It has been a pioneer in forest cultivation and currently owns 8,500ha of plantation pine and eucalyptus.

“The location of Ecuador with its climate, soil and water means you can get a very short harvesting cycle for the trees. In the past we harvested after 12-15 years but now it is about seven years.”

Novopan is also using recycled fibre – a material stream that often ends up being burned or as waste in rivers in the region.

“We are very conscious about the environment and our social responsibilities,” said Mr Alvarez. 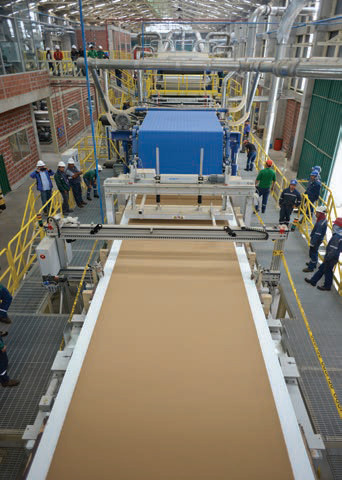 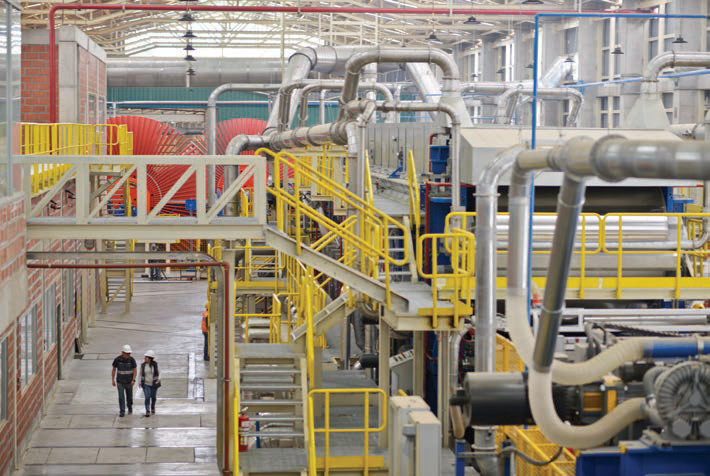