New capacity in both regions

This is the first edition of this two-part survey, in which we list all the particleboard mills operating in Europe and North America as at the end of 2014. We also look at the markets, and the prospects, for the industry in the future.

Looking first at an overview of the situation in Europe, the west of the region is, unusually, showing two new mills, one in Italy and one in Germany, while eastern Europe continues to offer the more significant news on new capacities, with several new lines starting production in 2014 and several more due onstream in 2015/17.

However, as reported at the EPF (European Panel Federation) AGM in Vienna in June, there is better news from the market for EPF member mills in Europe, which reported a better year for panels generally in 2014.

For instance, the new managing director of the EPF, Clive Pinnington, said that European particleboard production in the EPF's member countries improved by 2.5% in 2014 and exceeded the projection made last year.

Output amounted to 29 million m3, reported Mr Pinnington, although this production level remained far below the output peak of 37.8 million m3 observed in 2007.

In North America, the housing boom that so was so talked-about last year has failed to fully meet expectations.

That is not to say that the market is stagnant by any means, far from it, but the pace of growth is much slower than many had hoped. Problems with the weather in the first quarter also hit the housing and logging industries and the strong US dollar exchange rate has not helped.

The slowdown in China's economy, which still continues, and in other Asian markets such as South Korea and Japan, also damaged exports for North America's panel producers.

However, on the other side of the equation, the furniture markets in North America - an important outlet for panels - have been growing. While production in 2014 was still well below 2005-7 levels, the furniture industry showed 7% growth in 2014 over 2013 and growth is predicted to continue during 2015-16, with lower growth in 2017 (see Bernard Fuller's report in WBPI issue 3, 2015, p28).

This is probably at least partly due to a loss of appetite among manufacturers for having any more furniture produced overseas, combined with some 'repatriation' of that production into the US - good news for North American panel makers, but tempered by that strong currency issue which makes imports look favourable to the processing industries.

Concerning Greece, it is important to underscore that a large part of the national capacity was shut down in 2014. On the other hand, production facilities have expanded in Hungary, said the EPF managing director.

"With a slightly increased output, Germany remained the largest particleboard producing country in Europe in 2014, while only accounting for less than one fifth of the EU-EFTA production volume.

"France and Poland continued to complete the particleboard producers' podium: France kept its second position, despite a small decrease in its production and the significant progression of Polish output.

"Italy, where production decreased moderately, and the United Kingdom, where output grew steadily, formed the top five; and the 'club' of producers of more than two million m3 of particleboard in 2014. Together, these five countries accounted for 57.5% of the total EUEFTA production in 2014."

Mr Pinnington went on to say that the expectations for 2015 are stable and that the rise in production of particleboard in the EU-EFTA area as a whole is estimated by the EPF at +0.6% for 2015, which should result in production of slightly above 29 million m3.

Generally imports of particleboard also increased in 2014 (+9%), while exports remained relatively stable, with some exceptions.

In exports, the largest increases were in Denmark and Norway, while the largest declines came from Sweden, Greece and Finland. Particleboard exports of all EPF member countries increased 0.6% in 2014, to 10.4 million m3.

In 2014, the EPF member countries' apparent consumption and real consumption, which takes into account the stock variation, grew by 5.3% and 3.8%, respectively.

Overall European particleboard production capacity is foreseen to decrease marginally, by 0.4%, in 2015 and will remain below the 40 million m3 threshold, concluded the EPF.

You can purchase a copy of the full Annual Report by emailing [email protected] Refreshingly, after a downbeat report on Italy's particleboard industry in last year's survey of 2013, with several mill and line closures, this year we can report the construction of a new mill in that country.

Fossadello di Caorso-based SAIB ordered a new forming and ContiRoll line from Siempelkamp in the last quarter of 2014. The press is 8ft x 30.4m and has a designed capacity of 310,000m3/year. The line was due to start installation in October this year.

Meanwhile, in Germany, Rauch Spanplattenwerke has also ordered a Siempelkamp Generation 8 ContiRoll press line, of 7ft x 52m and a capacity of 630,000m3/ year. Installation commenced at Rauch's Markt Bibart site in May of this year. The line will replace the existing Küsters continuous line.

The contract includes forming and pressing, resin preparation and dosing, board handling and the installation of the steel structure. The particleboard will be mainly used inhouse by Rauch for furniture manufacture.

Eastern Europe
Outside the western European countries, Siempelkamp is also supplying a new ContiRoll Generation 8 press line to Plitspichprom, Russia, part of the Souz Group. This will replace an elderly multi-opening line at Balabanova in the Kaluga region. The press is 6ft x 18.8m.

The new line is due to commence production in Spring 2016. It is shown in Table 7.

Meanwhile, OOO Tomlesdrev was due to start commissioning its new 300,000m3 line in October 2015.

Staying with Table 7, Interwood Invest is due to commence production in December 2015 and to reach full production in 2017, while Sveza Group's new Dieffenbacher line is due to start up any time now. Kronospan Elektrogorskmebel apparently did start production during 2014, but we do not know when, so have left it in Table 7 and will move it to the main listing in next year's survey.

Kronospan's Ufa mill, apparently delayed by protests by the ngo Greenpeace, started initial production in August 2015, so again, this will be moved into the main listings next year.

Katyusha's 240,000m3 new plant in Russia has apparently been delayed and is now due to start production in the second half of 2016.

We mistakenly thought that the Dyatkovodoz mill was a separate entity in our 2014 report, but it is apparently the same company as Katyusha, so we have removed it from table 7 this year.

Kastamonu already has a large MDF line at its factory in Alabuga, Russia, and is to add a particleboard line of 725,000m3/year. An OSB line will follow later.

Ugra-Plit is to expand its particleboard mill in the Sovetsk District from 150 to 265,000m3/ year at some time in the next two years.

Again in Russia, in last year's report we mentioned that a group of Swiss and German investors planned to build a new line with a 100,000m3 capacity in the Komi Republic. The latest information we have is that it is to go ahead and the main investor, Swiss Worldwood Inc, planned to start building the factory in November or December this year. This planned line is not shown in Table 7 until we have more concrete information and hear that the machinery has been ordered.

North America
After a prolonged period of little or no investment in particleboard capacity, we now have two capacity additions to report here.

As we went to press, Arauco North America announced its intention to make a very significant investment in new capacity in Grayling, Michigan. Investment will total US$325m and Arauco says this will then be the largest continuous particleboard press in North America - and one of the highest-capacity presses in the world, with a designed output of 750,000m3/year. The company estimates that ground-breaking works will commence in late 2016 and that the first panel should come in late 2018.

"The location of this plant will also complement the supply of MDF from our neighbouring site in Sault Ste Marie, Ontario [Canada]," said a company press release in mid-September.

On the downside, Sierra Pine's mills at Adel and Springfield closed in early 2014, so have been removed from the main listing. Similarly, Agristrand's mill in the US is deleted for 2014.

Meanwhile, in Canada, Northern Engineered Wood's small Smithers mill has also closed and been removed from the listing as it is to be replaced by a wood pellet making facility.

There is no change to report in Mexico since our report last year.

The Composite Panel Association's annual capacity report confirms our figure of 21 particleboard mills in the US, five in Canada, and nine in Mexico. This refers to mills/ companies, not number of lines - that is summarised in Table 1.

As of January 2015, US capacity decreased by 71,000m3 in 2014, while Canadian capacity remained unchanged and Mexican capacity rose about by 7,000m3, due to increased production from Masisa's mill in Chihuahua. 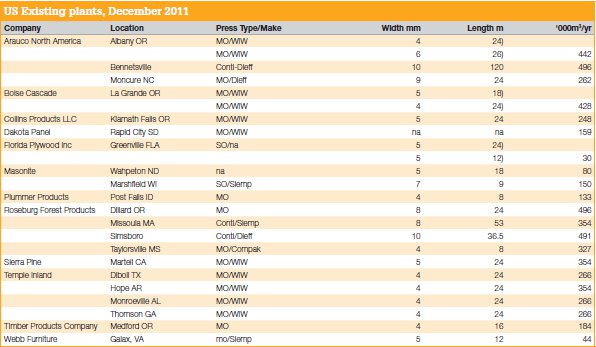 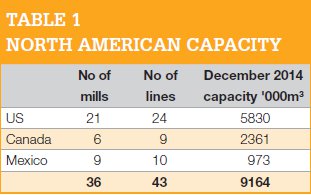 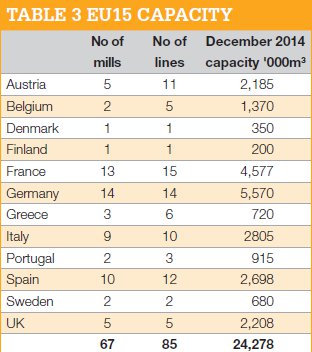 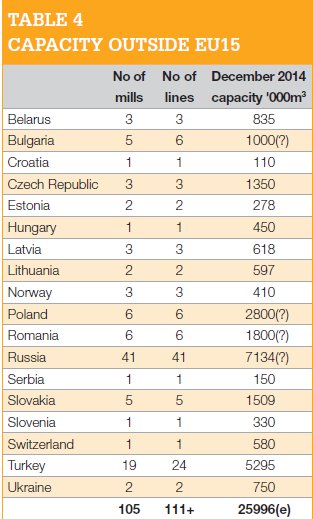 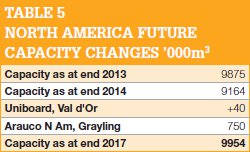 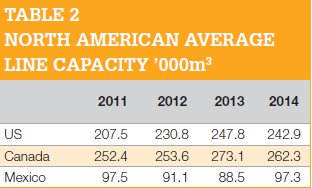 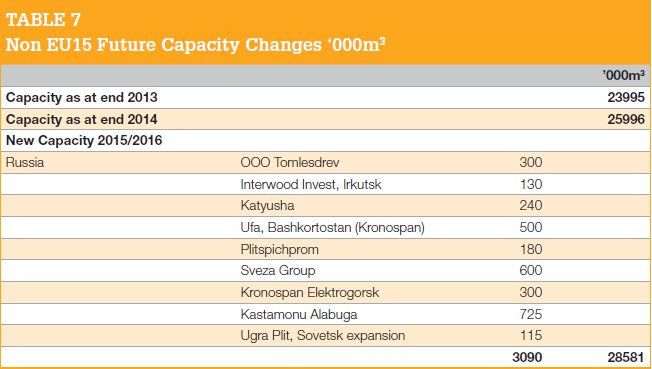