CMC Texpan’s northern Italy base was near the epicentre of the initial European Covid-19 outbreak in early 2020. It is reporting better, more stable market conditions in 2021 and has been busy working on innovations. Stephen Powney interviewed sales manager Marco Granzotto

There is a saying – what a difference a year makes. And in terms of how market prospects in wood-based panels technology are concerned, 2021 compared to 2020 has brought better investment levels from the panels manufacturing sector, according to Italy-based CMC Texpan.

The Colzate-based company, a supplier of a wide range of technologies for wood-based panels production, has been in operation since 1962 and is part of the Siempelkamp Group.

The company’s specialism in the wood-based panels industry is extensive and extends to multiple areas including chips and particles – extraction systems for storage silos, chip cleaners, magnetic separators, roller separators, gravimetric separators and oscillating screens; as well as glue blending systems and, of course, forming systems.

A year ago, CMC Texpan told WBPI about the market uncertainty with the initial Covid-19 outbreak in Europe in March 2020. The situation today, says company sales manager Marco Granzotto, is characterised by greatly increased market activity levels and more confidence.

“We were stopped from travelling and meeting the customer personally, and altogether the company was stopped from operating for nine weeks at the beginning, although, of course, working from home was going on,” said Mr Granzotto.

“It was a very difficult period because it’s not so easy to follow every project and customer from home. Nevertheless, we performed this in the best possible way.

“We used that time when the company was closed to invest in some products that we then presented in the next months, so we continue our jobs with some restrictions, though less compared to some months ago.”

CMC Texpan did not see any acquired projects postponed last year, though the majority of its staff remained in Italy.

“The first half of 2020 was a disaster for every company but we recovered in the second half so we closed 2020 more or less at the same business level as 2019 in terms of sales and volumes of projects,” added Mr Granzotto.

“In terms of new business 2021 has not been easy to handle because of some restrictions in enabling us to be able to meet customers, but we are able to work on the projects and follow all customer requirements.

“It seems that the orders have now exploded because now we have plenty of work and plenty of orders!”

Being part of a large global group like Siempelkamp has meant CMC Texpan has had assistance and work with group sister companies around the world.

It is also now making use of the Explore Siempelkamp digital platform, which showcases the group’s full range of products and services, including many videos that customers can watch.

“So, we try this digital way,” said Mr Granzotto. “This new platform works very well and the customers are digesting this new approach.”

“I think there are some parts of the world that are investing in new plants but there are a lot of customers wanting to revamp their existing plants,” added Mr Granzotto.

He expects several investment projects in Italy in 2022 and beyond, while several customers in Russia are looking to invest in technology.

CMC’s attendance at the Woodex exhibition in Moscow on November 30-December 3 is expected to yield more information on the pulse of the Russian market. “It is harder to gauge with no travelling and just video conference calls.”

Asia has been a lively market for some years. One of the projects CMC Texpan worked on with Siempelkamp was to supply a third particleboard plant for Green River Panels (Thailand) Co Ltd in Trang, Thailand.

Full commercial production at the plant was reached in June, 2020.

Design capacity of the Trang line is 2,000m3 per day but Green River Panels has targeted 2,500m3 per day (approximately 770,000m3 per year). Other Siempelkamp subsidiaries Büttner and Pallman also work on the project, and, given the results, CMC Texpan says it affirms that the “group synergy” bears good results.

CMC Texpan also has its eyes on the North American market as well as the hybrid board sector, which has seen growing applications globally.

It has collaborated a lot with the Siempelkamp group on the hybrid board front.

“Not all the world is ready for this type of board yet,” explained Mr Granzotto. “There are some customers that want to introduce it in the market but in my opinion it is too early to estimate numbers.

“We are also focusing on recycled wood,” added Mr Granzotto. “In the last year we have concentrated on developing some new products and we strongly believe in this segment.”

The Lynx machine is a main new offering in this area and is designed to remove contaminants and pollutants from the woodwaste material intake.

Since processed woodwaste material contains contaminants of different types, achieving an effective cleaning of recycled wood plays a primary role in the preparation of the raw material.

The machine is compact; it is based on SWIR spectroscopy (which is an evolution of the NIR system) and it is specially designed for the removal of contaminants such as plastics, foam, silicone, and polystyrene.

It may be equipped with optional accessories to detect particles according to their colour, or with an X-ray system to improve the efficiency of the machine and to detect and remove materials with higher density, such as ferrous and nonferrous metals, aluminium, copper, lead and various alloys.

“With this kind of machine, it is possible to remove a lot of contaminants using only one machine, whereas before you had to use two or more machines.”

Testing work has shown an efficiency rate of 95-98%. One machine has so far been installed at one of CMC Texpan’s customers and operational results data from the installation will be compiled by the company before the end of 2021.

Mr Granzotto said recycled wood use was an aspect of meeting sustainability requirements in the wood-based panels industry as well as an environment protection for future ecological/green targets.

“It depends which part of the world we are talking about because in Italy and Europe the use of technology for recycling wood is very high, especially in Italy because we don’t have much fresh wood.”

But he said the situation may change in other world regions that currently have plenty of fresh wood.

“We have to prepare for the changes in the next three to five years, we must be ready.”

A special R&D department has been created at Colzate to develop this side of the business.

“We are working to apply our machines to other sectors, for example plastic. There are some machines and some systems we have to modify and adapt for different products and sectors.”

CMC Texpan has a philosophy of not remaining static and it has two or three more developments in the wood preparation segment it is working on, which will be revealed in 2022-23 ready in time for the next Ligna exhibition in Hannover.

It is also developing some improvements in its existing glue blenders, as well as developing new blenders entirely in order to further save on the quantity of glue used in the boards. The latter will involve some new technologies and some adapting of the machine.

The company says reduction of formaldehyde emissions in the atmosphere during manufacture and in the formaldehyde content inside the board was an important trend.

On the forming systems front, CMC’s Ecoformer is also being enhanced to better performance.

The company is supplying the Ecoformer to both Siempelkamp and direct customer projects.

“There are some customers who ask us to replace their windformers with the Ecoformer because of the reduction in power consumption achieved and the quality of surface is higher, while saving on raw material,” said Mr Granzotto.

And customers will be interested to learn that there is a further broad new development coming from CMC Texpan.

“In the near future we will introduce something new to the market!” he said.

“It is not only a machine but a concept or system, from chipping to screening, from drying to blending and for forming.” 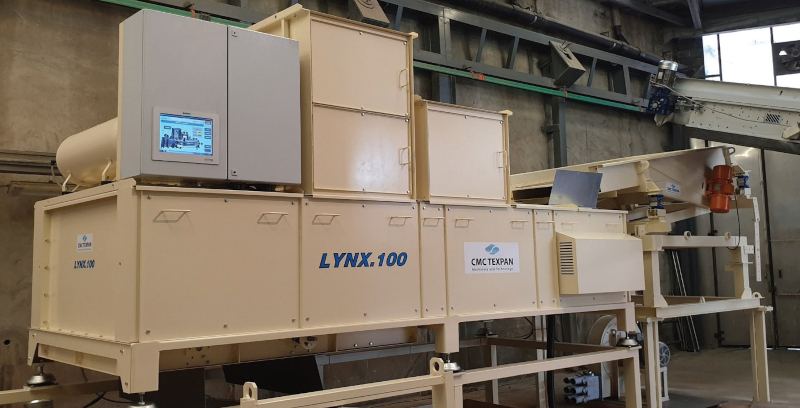