LVL moves to next level

The combination of an abundance of beech raw material and the market growth of engineered wood products has led it to invest in the world's first hardwood Laminated Veneer Lumber (LVL) operation.

At €105m, the new 180,000m3 mill at Creuzburg is a big investment, but if Pollmeier is right, then the product - marketed under the name BauBuche - could have a big future in the engineered wood products market.

Currently, all other LVL plants use softwood to manufacture their products.

The move effectively propels Pollmeier from sawmilling into the world of panel production, with a Siempelkamp continuous press and Raute peeling plant.

The difference from standard panel production is of course that many of the pressed panels are laminated together after the press cycle and cut to form beam products for the construction industry.

But a panel product - BauBuche Panel - does also form one of three finished product categories.

"For us it is a completely new business field and a large investment," Jan Hassan, Pollmeier public relations and marketing spokesman, told WBPI.

He said the completed factory started trial production earlier this year and has gone through the standard period for machinery adjustments. Now product marketing and production volumes are being stepped up.

"If you look at Central Europe, the countries are rich in forests," said Mr Hassan. "We have 22-25% hardwoods in the forests. But hardwoods are only found in 1-2% of structural timber applications.

"Hardwoods do go into furniture but this has been decreasing due to panel products.

"Hardwood forest stocks are at record levels and continuing to increase. In Germany, only 40% of the average new hardwood forest growth rate is harvested annually."

So Pollmeier's BauBuche also meets the needs of beech foresters, who are desperately looking for new markets for their material.

The reason why beech is under-utilised for structural uses is due to the complexity of processing it compared to softwood. Larger knots and more difficult drying add up to a more expensive process, therefore ruling the species out for production of volume glulam.

"98% of timber structures in Europe are in softwood, with 95% being spruce. Most of it looks the same, but beech looks very different and will appeal to architects and designers.

"Softwood LVL has a good structural performance but a poor visual quality and its main applications are where it is hidden.

"Hardwood LVL is 50% stronger than softwood LVL and it has a very pleasant surface; we see its main application as visual."

Board BauBuche S/Q is made, either bonded parallel to the grain (S) or with about 20% cross layers (Q). The S grade is used mainly in the production of bar-shaped components for which the boards are cut lengthways into strips for small beams, with 80mm wide cross sections.

The Q board, for load-bearing wall panels and as part of composite elements, has cross-layers to resist warping.

Board BauBuche standard thicknesses are 40, 60 and 80mm, with widths up to 1850mm and standard lengths up to 18m, though the continuous press means Pollmeier can produce longer sections.

The BauBuche GL70 beam product is made from 40mm thick BauBuche S laminations bonded parallel to the grain. The sides show the veneer layers and the top and bottom the hardwood surface.

"We do not see particleboard as a competitor. Solid wood edge-glued panels are more the competition. People will want to buy BauBuche Panels for its unique looks," said Mr Hassan Veneer layers are perpendicular to the surface, giving a striking look and also good strength, with applications including table tops, work surfaces, ceiling and wall cladding, stairs and flooring.

In terms of manufacturing technology, Raute and Siempelkamp were important suppliers.

But one of the first machines in the production process is a cross-cutting plant from Hanses Sägewerkstechnik GmbH. The 2m diameter circular saw cuts logs to 2m and 2.6m lengths, after debarking and before peeling.

Veli-Matti Lepistö, marketing communications manager at Raute, told WBPI the layup area was specialised, incorporating new technology, and in two sections. A reduced level of suction was also achieved in the installation.

Mr Lepistö said Raute was seeing an increase in LVL's popularity in the construction sector. The company will also be supplying the entire LVL (softwood) production line for Steico's planned factory in Czarna Woda in Poland.

"This is necessary to compress the veneers as beech wood has a much higher density in comparison to softwood."

The press program was developed for BauBuche, using features of the generation 8 ContiRoll such as pressure distribution plates to provide a quasi-isobaric pressure to the product.

The glue system has also been modified with assistance from glue suppliers.

A further supplier of machinery was HIT Maschinenbau GmbH, which supplied glulam technology for laminating and pressing Board BauBuche S sections together to form the Beam BauBuche GL70. Glulam is normally finger-jointed but Pollmeier's product is in full length lamellae up to 18m in length.

"No other LVL mill has a glulam manufacturing line connected," added Mr Hassan.

Pollmeier says it is able to offer Beam BauBuche at a cost-effective price (around €700/m3) because its high strength means it is slimmer than softwood glulam, saving 30% on material costs.

"You can use a hardwood product which is normally three to five times more expensive than structural softwood."

Pollmeier has identified seven focus markets where BauBuche will initially be promoted - Germany, Austria, Switzerland, Italy, France, Scandinavia and the UK. It also has plans for the US and Japan.

Several projects have already been completed since the line started, including supplying the LVL structure for one of the main experimental buildings of a summer school at the Mathildenhöhe in Darmstadt.

The building - a pavilion - was designed by Tokyo-based Atelier Bow-Wow and Berlin-based ConstructLab. The University of Munich is also working on a project to design a multi-storey car park using BauBuche beams and posts.

Pollmeier has already displayed BauBuche at exhibitions over the past year, with more planned for next year.

Beech veneers being laid up 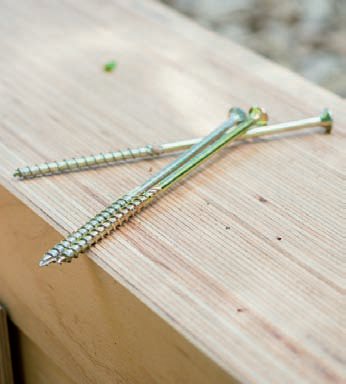 Cross section of a Beam BauBuche used in the Mathildenhöhe project 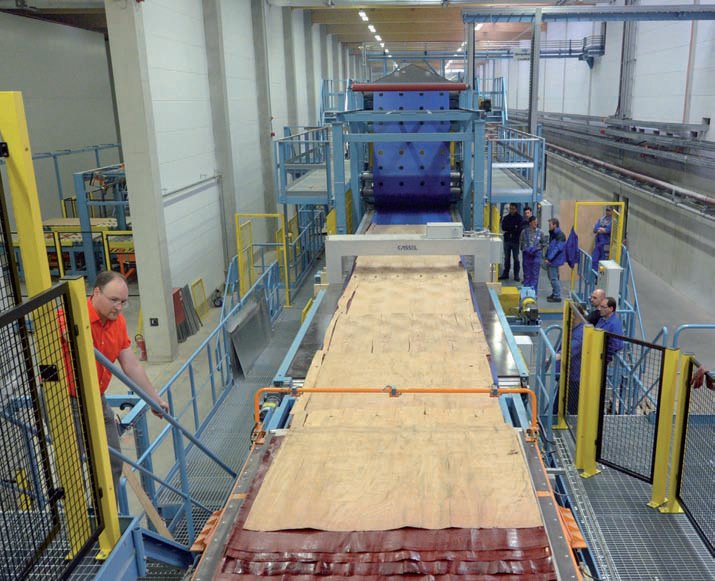 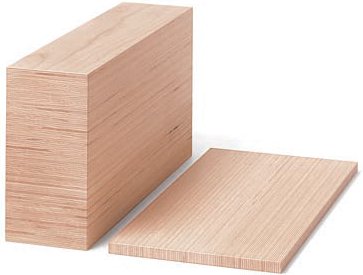 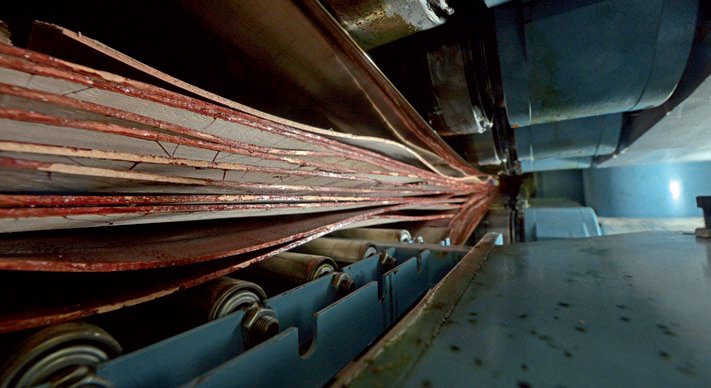 Veneers inside the press