Pagnoni was founded even before the state of Italy and, at the age of 160 this year, can celebrate the fact that it is still finding new products for new markets, based on its long experience in the panel industry. The original Fratelli Pagnoni company was founded in Monza in 1848 by the two brothers Stefano and Martino Pagnoni. That is a long time ago, but when you consider that the original family business was founded in flour milling in the 1700s you begin to realise the truly long history behind today’s family business, Pagnoni Impianti.

Fratelli Pagnoni was formed as an engineering workshop to serve that milling industry and went on to build a new workshop and foundry in 1903. The product range was expanded to include sawmilling and a wide range of other industrial machinery, including in-house manufacture of all the minor components such as gears and pulleys.
Pagnoni then developed presses for the pasta and olive oil industries and this formed the basis for the development of hydraulic and hydraulic oil-based technology which was to lead the company into a dominant position in the market for presses for the panel, initially plywood, industry. The first such press – a two-daylight unit designed for use in manufacturing aircraft plywood – was built in 1918 and is said to have set the industry scene for the development of heated platen presses which dramatically reduced pressing times. Tough times followed, with two world wars and economic depression taking their toll, but Pino Pagnoni revived the company’s fortunes, modernising its production techniques and introducing press parts made from welded components, rather than relying solely on castings.

During this phase of the company’s long life, some 300 presses were sold to the plywood industry – many of them are still in use. Nino Pagnoni was also responsible for the launch of the first moving pre-press for particleboard and fibreboard production; a radical step and a pre-cursor to the later continuous presses. The 1970s saw the production of complete turnkey lines for the panel industry, particularly particleboard. However, the difficult economic times of that decade almost saw the end of this historic company as it went into voluntary liquidation in 1983, but Aldo and Giorgio Pagnoni took up the baton and renamed the revived company Pagnoni Impianti; and that is the name it still bears today. Those two brothers still head up the company, too, and the next generation – represented by cousins Dr Barbara Pagnoni, sales manager and Dr Michele Pagnoni, technical manager – are continuing the 160-year family tradition.

The large old factory in Monza was built in 1946-7 on the outskirts of Monza in northern Italy, but over the years the town grew and the factory ended up being in the middle, which was not a good place for a heavy industry to be. The opportunity arose in 2006 for the company to sell the factory site for redevelopment and to move to a brand new 4,000m2 industrial unit outside the town again. The old factory was developed to house a very different production technology,explained Michele Pagnoni. “In those days everything from the screws upwards was made in-house but today, like everybody, we use sub-suppliers for the basic components and make the heart of the technology ourselves, focusing on the components which are really important and that only we can make successfully.That includes the high-precision drilling of the thermal oil passageways in the hot platens. Pressing is still at the heart of the business and Pagnoni Impianti makes presses for the production of particleboard, MDF, hardboard and cement-bonded articleboards, as well as for high pressure decorative laminates and short-cycle lamination. These are single- and multi-opening presses of various sizes.

Pagnoni made its first foray into continuous pressing in 2002 with the launch of Easylam. This press, with double endless stainless steel belts, was not intended as a competitor for the gargantuan presses of Siempelkamp and Dieffenbacher but was aimed at a very specific, more niche, market. It is intended for the application of glued overlays such as veneer, HPL or CPL onto any wood panel substrates and for the production of engineered parquet made of two or more layers. The drums and platens can be heated or cold, depending on the type of adhesive being employed, and the press has four variable-temperature zones. If the press is to be used only in cold applications, synthetic materials rather than stainless steel are employed for the belts. The press has already been proved in the above applications, but Mr Pagnoni is currently working on the software to create an Easylam press suitable for pressing lightweight honeycomb panels for a potential client in the US. Another Easylam has been delivered to Finland for the pressing of non-wood composite panels.

For short-cycle pressing, as an alternative to traditional high-capacity lines, the company offers two single-opening press types aimed at customers who want to keep investment costs down: The Smartline and the Selecta. The former is available as 4x8ft only, while the latter is available in sizes from 7x14ft to 6x9ft. Selecta has automatic or semi-automatic lay-up, while Smartline is only semi-automatic. "The most important field for us at present is in melamine lamination,said Barbara Pagnoni. “In the last five years, we have developed a standard line which competes with the Chinese on price, while competing with European lines on quality. "It was not practicable to go on just with the big lamination presses of five or six years ago because of the cost, so we decided to go for simpler, standard lines and we have supplied 10 such lines in the past two years.
“They are all similar to each other, which means a lower price and repeatability.The core markets for Pagnoni today are developing countries such as Iran, where it has sold about seven lines in the last three years. It is now putting some concentration into the Russian market for short-cycle and high pressure laminating (HPL) lines. “We have also developed a standard multi-opening press line for HPL and are just finalising the prototype,said Mr Pagnoni.

However, the company is not just offering value-adding lines.  At Seripaneaux in southeast France, Pagnoni has very recently supplied a particleboard production line with a continuous Pagnoni pre-press and single-opening hot press of 2250x14900mm. It is being erected alongside a similar line supplied in 2000. Meanwhile, in Syria, Pagnoni has just supplied an HPL press with 15 openings of 2200x3350mm. It is one of several supplied to the same client. To add variety, a press line for the lamination of plywood with phenolic film has been supplied to the Ukraine, while another for melamine facing particleboard is destined for Tunisia. At the Xylexpo exhibition in Milan in May this year, a new press line for HPL was presented. “The Farline is a powerful but easy-running press designed with the same essential criteria as the successful Smartline and Selecta short-cycle lines,said Ms Pagnoni. "It is designed for the production of both thick and thin HPL panels and has a 5x10ft, 12-opening press for lower production capacities with high-quality production.”

So, with 160 years clocked up so far, where is Pagnoni Impianti headed now? We want to stay in the primary panel market and we think we can continue to find good markets,said Michele Pagnoni. “We want to remain in less sophisticated markets than those for continuous panel production presses – smaller markets, with high quality production.” 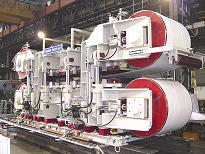 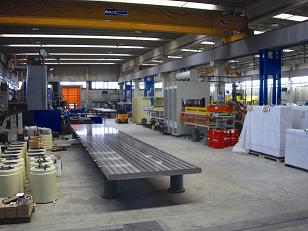 In the workshop at Monza; 2250x14900mm press platens for a particleboard line; and the erection and testing of a short-cycle line before its delivery to the Ukraine 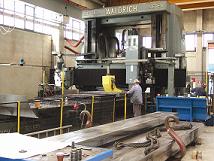 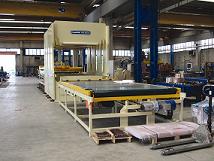 Selecta short-cycle line under construction in the factory