Italy’s IMAL PAL Group continues to focus on innovation to stay at the forefront of panel production technologies. Stephen Powney reports from its Modena headquarters

Having recorded a turnover of €200m in 2018, Italian wood based panel production technology specialist the IMAL PAL group, including Globus, is predicting another positive performance in 2019.

Walking around the Modena factory with IMAL’s vice-president of marketing and sales Stefano Benedetti, it was clear that there is a lot of change on the ground as well.

Mr Benedetti pointed out extensive building work currently going on – new 5,000m2 offices and an additional 6,000m2 of factory space is being constructed. And by popular demand from the staff, a car park for the growing workforce is also being developed. The work is costing around €10m.

Pal is also now increasing its manufacturing building at the PMI site by about 3,500m3 and is installing a new horizontal lathe which is approximately 14 m long and costing around €800,000.

Staying one step ahead of the competition is the name of the game in the global panels technology industry, Mr Benedetti said.

Ushering me into a new lab in the factory, he showed me just one of these new areas. MMW, which stands for Millimetre Wave Gauge, is a technology the company is developing for transversal surface density and moisture measurement.

It is based on wave scanning technology, typically used in the military for radar and in airport security for full bodyscans. IMAL has employed former university research specialists on the product development team for creating a wood based panels application for the technology.

“In the last couple of years we have invested a lot of money in this wave technology,” explained Mr Benedetti. “It works like a radar and does not have gamma or X-rays, so it is 100% safe. It gives good information on weight, density and moisture, also identifying foreign particles. We believe this technology will eventually replace X-ray technology.”

He also said it required no maintenance and did not have a shelf-life like X-ray technology (no X-ray tubes) and takes up less physical space, while costing less than X-ray equipment. Capable of being used in the line before or after the press, the wave technology’s other cited advantages include elimination of cooling facilities, easy installation and no administration costs related to X-ray safety requirements.

The first development is focused on detecting weight and moisture, with detection of foreign particles being the next step.

“At the end of 2019 we start production of this machine. In the future there will be many applications in the panel production process for this technology, for instance before the refiner to detect metal and stones in recycled material.”

He emphasised achieving a good balance between providing upgrades for existing panel factories and supplying equipment for whole new lines.

“We like to have 50% of business with upgrades and 50% on new lines.” IMAL PAL is predicting less investment in new lines in the next two to three years, partly due to lower board prices in markets, particularly South-east Asia.

Despite the group’s good financial performance, Mr Benedetti described the current market situation as hesitant and quieter than normal.

“Several complete line projects are on hold,” he added.

The group’s expertise in upgrading work still gives him confidence that sales targets will be reached though.

IMAL PAL sees China looking more at new panel product types, such as Lightweight Strand Board (LSB) – which is basically a lighter version of OSB, combining fine material on both surfaces, with good structural strength and screw holding abilities and targeted at applications in the furniture industry. The core consists of oriented strands and faces of wood microparticles.

Its first LSB lines were supplied some years ago in Italy but it is now seeing growth in Asia.

IMAL has three LSB contracts in China for start up in 2019, with capacity typically 1,000m3/day. For some of its LSB projects, it has co-operated with Chinese press supplier Yalian. Customers converting their existing facilities to make LSB is proving popular.

“LSB is a new product that China likes because they can use wood that is available to them, normally poplar and the product can sell for a higher price compared to MDF and particleboard,” said Mr Benedetti.

Moving on to other products and new projects in Asia, IMAL has supplied its second MDF project in Vietnam – a 180,000m3/year capacity project to Thanh Thanh Dat. The first board was produced in May.

The customer is also planning to build a second line with a 350,000m3/year capacity.

Its first MDF project in the country was two years ago to Vietnam Rubber Group. Meanwhile, IMAL’s first OSB project in Thailand is at Vanachai, with commissioning currently taking place and production expected to start in October.

In the same wider region, IMAL PAL has its first contract in Australia – a particleboard line for Borg Manufacturing, with the company supplying up to the forming process including High Pressure Particleboard Resination Technology (PB HI-JET), with PAL supplying screening equipment and GLOBUS its knife flaker equipment and sharpening room.

Staying with Globus, its DSG Disc strander machine is new for the company, with two supplied and installed so far in China at new OSB/LSB plants. The technology, which works on the rotor principle, was demonstrated at Ligna where there was reportedly big interest.

“With this product we have completed the range of products for Globus, with a full range of equipment for stranding, chipping and flaking for OSB, MDF and particleboard,” said Mr Benedetti.

“We are the only company in the world that can supply the strander and the automatic sharpening machine.”

The group having its own flaker equipment also protects its expertise and capabilities to supply LSB lines.

Globus’ belt dryer is another piece of technology which the group sees as taking more market share in the future, due to it low operating temperature – 100oC for strands or particles.

Quoted advantages include less risk of fire, no burning of the material and elimination of VOCs.

Today four complete belt dryers are currently in the process of being manufactured to be delivered early 2020.

Meanwhile, PAL’s recent contracts include supplying new pellet lines in Korea, for manufacturers who are exporting pellets to the Japanese market.

The group says PAL’s offering is very competitive for big capacity projects, with DynaPelletPress machines running 24/7 and with a 12 tonnes/hour capacity. The company says that no other pellet press in the world can process a capacity of 12 ton/h.

It is supplying some lines that will utilise a mix of virgin wood fibre and recycled fibre. The group believes it can increases sales in the pellet industry in the coming years, particularly in Asia.

At Ligna, PAL presented the Stepper Screen – a new roller screen designed to solve the problem of wrapping around the roll in recycled wood. It has also been promoting the new “cleaning tower”, which removes pollutants from the material, exploiting height and gravity in order to reduce the number of conveyors required to transfer the material from one machine to the other.

And the new evolution of Cyclops type “all in one” is an optical selector based on NIR technology detection and ejection by air compressed nozzles. This version is integrated with metal detector and blower to clean the wood flow from all kinds of pollutants such as plastic, rubber, foam, stone and metal.

PAL has done a lot of development work on the optical sorter and has extended its capabilities to clean recycled wood chips for MDF production, with applications in Europe, such as Frati Group’s Bipan business, and Asia, including a contract in Korea.

Most plants currently use virgin fibre for MDF production, but with low MDF prices in Asia and waste wood already being used for particleboard manufacturing in the region, IMAL PAL is confident the same trend will happen with MDF.

A further step in the future will be the potential to use MMW wave technology to replace X-ray technology in the Cyclops optical sorter.

In Europe, IMAL is supplying all four of Norbord’s plants with Dynasteam, the prepress steam injection system designed to raise the temperature of the mat to quicken cure times and therefore increase production capacity (20% increase is quoted by IMAL). Dynasteam installation numbers reached 110 up to August 2019, with panels giants Egger, Pfleiderer and Finsa among its customer base.

“The payback on Dynasteam is normally just a few months,” Mr Benedetti said. “It’s a very simple installation, we normally take just a few days to install it within lines.” Turning to the High Pressure Resination System (Hi-Jet), IMAL reports that 197 systems have been sold to August 2019, with 40 of those in 2018, mainly for MDF and PB applications.

“We expect to sell a lot of this technology in the next years, there are still a lot of plants to modify in the world,” said Mr Benedetti. MDF and PB Hi-Jet technology is mainly supplied to existing plants, while the OSB system is concentrated on new plant projects.

The technology, introduced before the blending process, is designed to achieve the most optimum distribution of glue on wood particles, reducing resin consumption.

IMAL is also confident in prospects for its FBC200 blow detector, which is able to detect blisters or blown areas over the entire surface of any board type, unlike earlier systems which only cover a proportion of boards. The system features 130 channels.

Lab equipment has also been a focus for IMAL of late, with the second generation of its SMC lab sample technology presented at Ligna. Improvements to the technology, which prepares board samples for testing, include more speed and an increased range of sample sizes which can be cut.

“We have listened to industry feedback and its now more flexible,” said Mr Benedetti.

Three SMC100 machines have been supplied so far, with several orders to be delivered this year.

“This is a machine we believe that in the next five years we can supply to all the main groups in Europe,” he added.

Main advantages are an improvement in work safety and a reduction in costs.

IMAL already has a press lab and also now has a lab forming machine – something the market has been asking for.

“There has been a lot of interest in this from the main groups, while resin producers have asked to have this machine in their labs. We can design a complete lab for companies,” he added.

The group is also involved in supplying press technology, where it sees growth potential. In the past it has worked with press manufacturers in China but has moved the operation back to Italy.

“When a customer wants to have one supplier we can supply a tailor-made plant.”

The group has supplied one press this year and next year it will supply a 40m long press to China. “We want to grow steadily in this business,” said Mr Benedetti.

The European market has been described by IMAL PAL as fairly quiet but companies have been upgrading lines with the Hi-jet, Dynasteam and Cyclops, the latter for use with recycled wood.

Finsa’s Santiago PB plant was supplied with wood preparation, screening and blending equipment – currently in fabrication and to be supplied end of 2019/start of 2020.

Another project in Spain is particleboard equipment for Tuberos Hispanos, which will see its first board produced in August. The company supplied up to the forming line.

In Germany, the Hi-jet resination system is being supplied to Glunz’s Nettgau OSB plant. Another particleboard line at Rauch was supplied with the Hi-jet system at the start of 2019, while at Egger’s North Carolina particleboard plant a big package order features screening and blending technology. Today 6 Egger plants run with the Hi-Jet resination system, 7 Sonae plants, 3 Pfleiderer plants, and many others to total up to nearly 200 today. 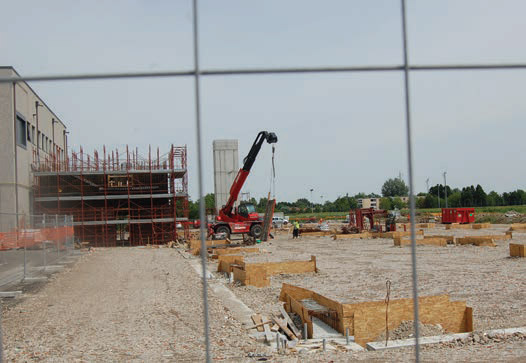 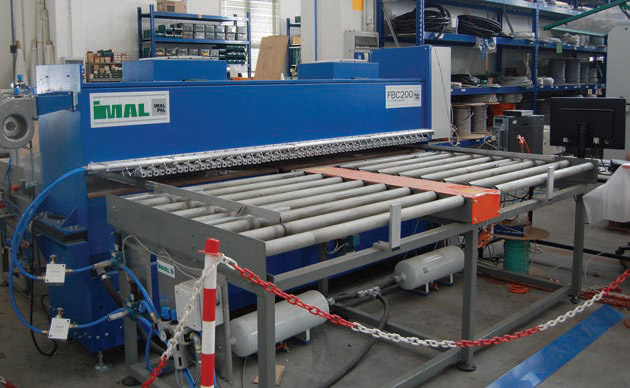 An FBC200 in the final stages of production 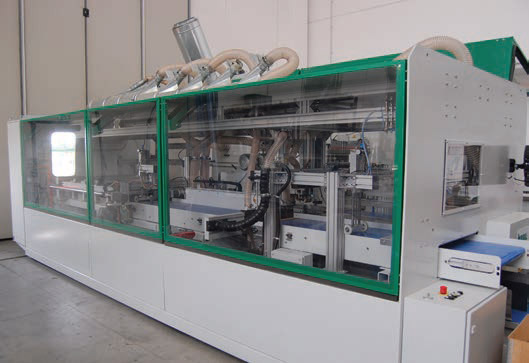 The latest version of the SMC100 lab 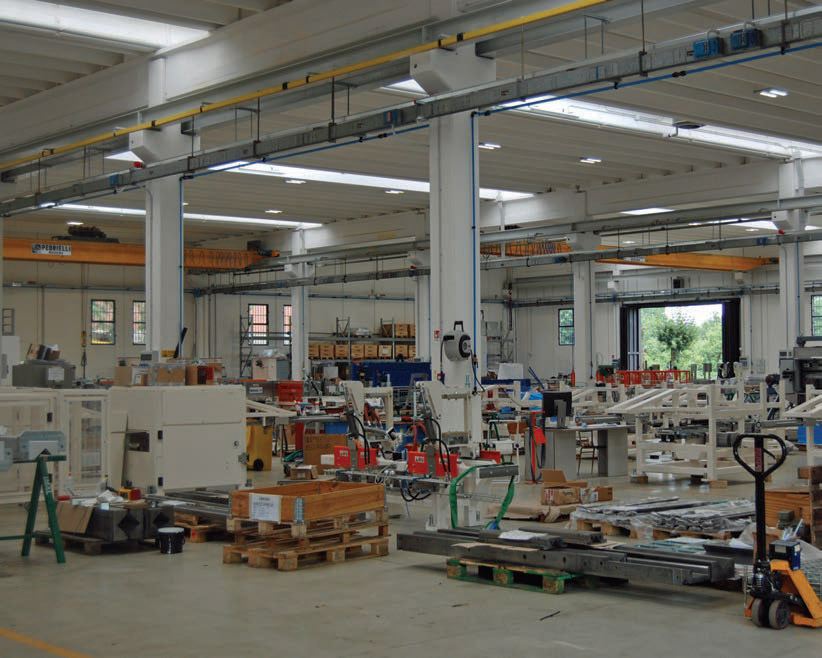