Ikea to expand in Poland

Sweden’s IKEA Industry has launched a project to expand its HDF plant in Babimost, in Poland’s southwestern region of Lubuskie. This investment will enable the manufacturer to increase the capacity of its plant. Our Poland correspondent, Jaroslaw Adamowski, reports.

Under IKEA's expansion plan in Poland, the new production hall at Babimost, which will have a total area of 10,000m2, is to be opened in autumn 2015.

The investment is designed to increase the factory's output capacity by about 2,250m3 per week.

Ewa Cander-Karolewska, communications manager for the Polish market at IKEA Industry, said the investment in Babimost will serve a double objective for the Swedish producer.

"The construction of a new production hall in Babimost ... is being carried out with the aim to both optimise and automate the manufacturing process. The implementation of the production process is divided into two stages. In the first stage, the main change is the panel saw, which will have a capacity of 125,000m3 per year," Ms Cander- Karolewska told WBPI. "The second stage of the manufacturing investment will consist of enhancing the gluing process, with a capacity of 6.3 million elements. This component of the project will include two lines for wood frame systems and a continuous press line."

"Due to the significant demand [for HDF] at our production facility in Babimost, we have made a decision to locate panel sawing at the plant. This will allow us to avoid 15 truck transports per day between [our plants in] Zbaszyn and Babimost," said Wojciech Waligora, the chief executive of IKEA Industry Poland.

IKEA Industry launched the project to expand the Babimost-based facility in April 2015. The total value of the latest investment was not disclosed by the Swedish IKEA Group, of which IKEA industry is a subsidiary.

The company says it is the world's largest manufacturer of wooden furniture and it operates 44 production facilities in 11 countries, with a global workforce of about 20,000. The Swedish firm has an aggregate output of 100 million units of wooden furniture per year, according to data released by IKEA Industry.

This manufacturer has a significant foothold in the Polish market, with close to 10,000 workers employed at 16 production facilities in 13 Polish municipalities. In addition to the plant in Babimost, IKEA Industry owns factories in Lubawa, Zbaszyn, Zbaszynek, Goleniow, Stepnica, Chociwl, Resk, Wielbark, Konstantynowo, Szkoczow, Orla and Stalowa Wola. These are active within the company's four divisions, which include Flat-line, Solid Wood and Boards. In Poland, IKEA Industry produces ultra- thin HDF (UT-HDF) in thicknesses ranging from 1 to 3mm. The master board formats range from 1.87 to 2.85m wide and from 4.8 to 6.3m long, according to data from the firm. UT-HDF is made at IKEA Industry's Polish facilities with the use of low-grade pulpwood from local forests.

The company's sawmill in Orla processes 60,000m3 of sawn timber per year, using 2.5m-long pine logs with diameters ranging from 20 to 25cm. The wood comes from Poland's northeastern region, Lithuania and Belarus. According to IKEA Industry, it is characterised by good quality, small knots and a low resin content.

Currently, the company's facility in Orla specialises in producing HDF. The plant's output is transported to the factory in Zbaszynek, about 583km away, where IKEA Industry operates its sawing facility.

In addition to reducing its transport operations, the company is aiming to benefit from investment in a number of other fields as well, according to its representatives.

The expansion of its plant in Babimost is expected to enhance the effectiveness of IKEA Industry's planning activities and increase the flexibility of its manufacturing segment, said the Swedish manufacturer.

Under the plan, the new production hall will have a capacity of between 100 and 150m3 per shift, with the company planning to carry out production five days per week, three shifts per day.

This said, IKEA Industry says it is not planning to expand its workforce in Poland, as some of its workers who are currently employed in Zbaszynek will be offered the opportunity to relocate to Babimost. The two municipalities are only slightly more than 10km away from each other.

The firm's factory in Babimost has been active in the country's wood based panel industry since 1992, and it is currently operated by more than 700 employees. As a result, IKEA Industry's plant is one of the largest employers in this Polish municipality, which has a total population of less than 4,500.

The latest investment is part of a series of manufacturing projects which, over the past years, have been launched by IKEA Industry in Poland. In September 2014, the company opened a new sawmill in Stalowa Wola.

Located in the Tarnobrzeska special economic zone (TSSE), the plant was launched with an initial workforce of 75 employees and a plan to gradually increase this to some 300, according to a statement released by the state-run Polish Information and Foreign Investment Agency (PAIiIZ).

The facility has an annual capacity of 400,000m3 and is part of the group's Solid Wood division. The wood is supplied by Poland's state-run State Forests (Lasy Panstwowe).

Local news website, Stalowemiasto.pl, reported that the Swedish firm invested about PLN33m (£5.8m) in setting up the plant and spent a further PLN6.9m (£1.2m) to acquire two plots of land totalling 25ha on which to locate it.

Construction works at the site commenced in March 2013 and test production was launched at the sawmill in July 2014, two months before the official launching ceremony at the facility took place. The plant supplies its output to IKEA's furniture plants in Poland and neighbouring Slovakia.

"Poland is a very important country for us, also with respect to production. It offers quality natural resources, qualified employees, and a high effectiveness of production. In addition to this, it is located in close proximity to one of the largest European markets," Henrik Andresson, the manager of the Solid Wood division at IKEA Industry, said at the plant's launching ceremony.

"The Swedish company has major plans regarding its expansion in the Polish market," the state agency said. "Over the next 20 years, the group is planning to increase its revenues in Poland by as much as 800%, up from the current PLN2bn (£350m) to PLN16bn (£2.8bn).

Poland is the world's second-largest producer of products for IKEA, preceded by China. The third market regarding the reported sales dynamic is Russia."

On a related note, the company's regional distribution centre, located in Jarosty in central Poland, acts as a regional hub for deliveries of the producer's output, supplying products to its subsidiaries in the Czech Republic, Slovakia, Romania, Bulgaria and Hungary. 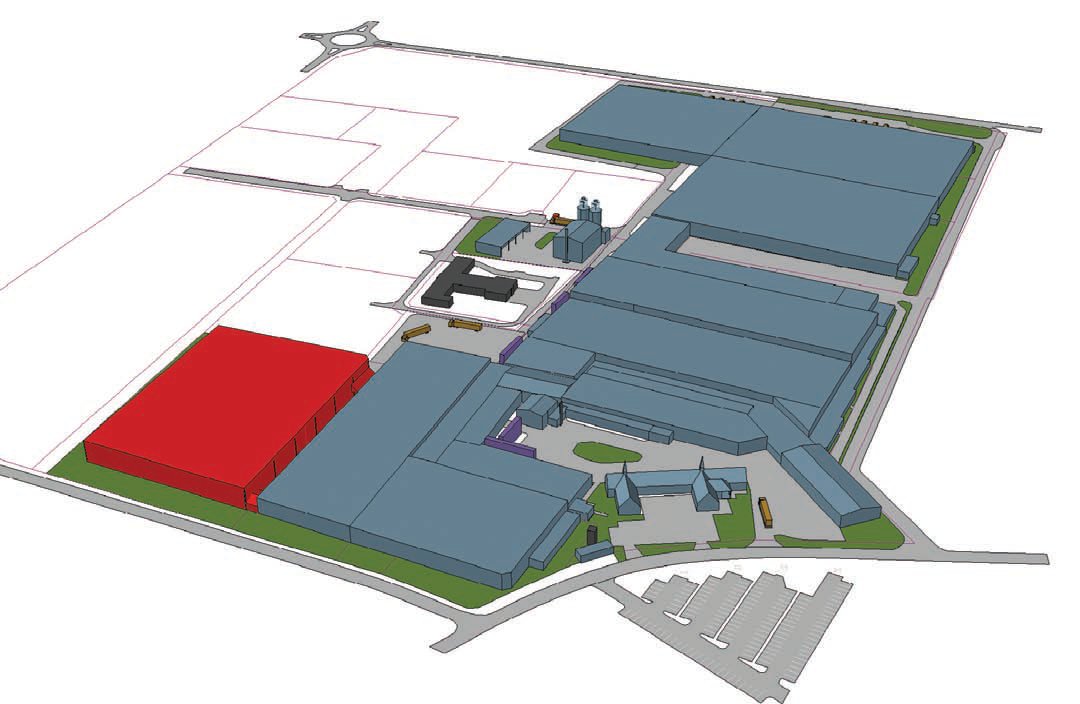 Plan of the Babimost production hall