Have we hit the buffers?

Resin building is a complex art, as many of you will know! Resin formulations are often closely guarded secrets, especially between mills who still operate their own resin kitchens.

There was a time when great skill and technical investigation was directed at observing the precise characteristics of the mill’s woody feedstocks, to best tailor the resin to the raw wood, and achieve significant boost in panel mechanical properties. Maybe this is still the case today, for new mills in regions with single species supplies.

Comparisons of many wood species have revealed that a key parameter in this is the ‘buffer capacity’ of the wood. What does this mean exactly?

Wood fibres or particles are a composite of the three main structural polymers: cellulose, hemicellulose and lignin. The properties of hemicellulose and lignin vary between softwoods and hardwoods, giving an inherent level of ability to react with acids and alkalis. Resins, as we remember, are often acidic (for example, the ureaformaldehyde group of resins), or alkaline (for example, many resol-type phenolic resins). So straight away you can see that wood species, and in particular, whether the tree is a softwood or a hardwood, makes a large difference on reactivity of the resin.

That’s not all. Wood also contains a number of other minor components, or ‘extractives’, that are either deposited in the cells for protection (for example, when heartwood is formed), or are left behind when the sap of the wood dries out after the tree is felled (for example, starches and sugars in the sapwood regions). The range of extractives is enormous, some are fats and steroids, some are sugar-based, others are protective chemicals that the tree synthesises to prevent attack by insects or fungi (for example, terpenes, lignans, stilbenes and so on). The range of chemicals found is also often closely related to the tree species – just think of the tannins in oak (well known for the flavour they give to wine or whiskey when used in casks and barrels).

The other important thing is that some of these chemicals have an extra effect on how reactive the wood is to acids and alkalis.

So, despite being small, a single wood chip may contain a complex mix of chemical compounds, giving it a very distinct way of interacting with the resin we intend to use to bond it into the board. We can measure this effect by boiling a sample of wood chips, wood meal or wood fibres in water for a fixed amount of time and measuring how the solution of wood extract obtained reacts with a standard solution of acid or alkali. A titration is done to build a curve down to low pH (acidic conditions) and up to high pH (alkaline conditions). We might find that the acidic oak tannins require a large amount of alkali to be added before the pH rises, whereas other species may take fewer additions of alkali to reach the same pH.

So, what has happened as we move to a greater quantity of recycled chip as a feedstock? The effect on predictability of buffer capacity has been huge. Depending on the source, recycled wood can be very uniform, or incredibly heterogeneous. A multi-purpose resin, not tailored too strongly to a single timber, may be needed, but the loss of precise control of resin cure is a tradeoff. Contaminants could also be an issue.

Some efforts are being made to investigate the buffer capacity of recycled wood, especially where MDF, PB and OSB are being recycled by steam explosion or new technologies. Maybe there will come a day when the recycling, sorting and segregating of wood-based panels becomes sufficiently mainstream that we can properly close the loop. An assured supply of sufficient quantities of uniform recycled chip might allow the mills to re-gain the levels of predictability in feedstock properties that previous generations once enjoyed.

Dr Morwenna Spear is a research scientist at the BioComposites Centre, Bangor University 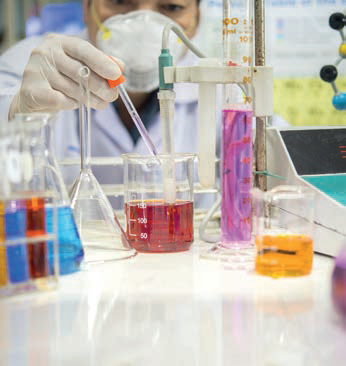