Accurate and rapid patching of its plywood’s surfaces is essential to Finnish plywood maker UPM and two technology companies worked closely together to satisfy its requirements. Mike Botting visited UPM’s Pellos mills to see the result

The softwood plywood produced by UPM-Kymmene Wood Oy is not a commodity panel; quality is very important and patching of the surface veneer is a vital part of that quality as spruce naturally has cracked knots, resin pockets, splits and other defects to be repaired.

The problem to be overcome was that traditional manual methods of patching with putty are labour-intensive (and Finnish labour is not cheap), time-consuming and difficult to do, while directly impacting panel quality.

UPM needed a more high-tech solution, so the plywood producer - with the largest-capacity plywood mill in Europe and as the seventh largest producer in the world - found the answer in a fully-automatic patching line supplied by a combination of the expertise of Argos Solutions of Norway and Biele SA of Spain.

"We are very proud of this patching line and currently have the only one operating on this scale worldwide," said Mika Kekki, director of operations and spruce production for UPM plywood, based in Pellosniemi, near Ristiina in Finland, when interviewed in late June.

"This has been a very long journey, because we first began investigating fully-automatic patching in 2000 and had our first meeting with one of several possible suppliers in 2002, but it is now 10 years later that we have this line from Argos and Biele.

"In 2007 we very nearly went for another system, but I am glad we didn't. The other technology was based on robotic arms, whereas the system we have is based on a 'portal' arrangement which is much better, takes up less space and operates more efficiently."

The decision to invest in the Argos Panel Repair System was clearly not taken lightly, as Mr Kekki said it involved staff at all levels within the company and on the production line, including R&D, and not just the project's steering group.

"But once we made the decision and the board of directors gave the go-ahead, we contacted Argos and the deal was closed in about four months. Six or seven months later, the patching line was running on our Pellos 2 line," said the director.

"What really impressed us was that we could first see the full line running in Argos' laboratory in Kongsberg, Norway, and that made us believe it could really work. Now the line has been running for nine months and we have had no major issues with it at all."

The success of the line is borne out by the fact that UPM has ordered a second one for its Pellos 3 plywood production line; that line is expected to be running in early 2013.

The Pellos 2 patching installation is running at the equivalent of 200,000m3/year now, so Mr Kekki is happy that it has already proved itself.

"Our mills have to run flat out or not at all because there is a lot of capital tied up in them," said the director. "That means 345-350 running days per year in five shifts, 24 hours a day, seven days a week."

Panels are taken from the press unloader by roller conveyors, round the corner and beneath the patching line to its beginning.

Here a vacuum lift, designed and manufactured by Biele in its factory in Gipuzkoa in the Basque region of northern Spain, lifts individual panels up to a very special vacuum conveyor, known as the EVO Conveyor - a vital component in accurate panel repair. This conveyor consists of two fixed vacuum tracks about 1.8m apart, each positioned between two high-friction moving PVC 'timing belts'.

The metal vacuum tracks have nozzles in them, controlled by pneumatic valves.

The PLC tracks the panel's movement along the EVO Conveyor based on encoder signals and only those nozzles that are totally covered by the plywood panel are turned on. This ensures maximum vacuum to securely hold the plywood panels in place and reduces both noise and power input, says Biele.

The timing belts are necessary to ensure stable transport of the panel and an accurate position reference for the patching heads; obviously any disturbance of the panel relative to the track after scanning would mean that the routing and patching could not be accurately executed.

The panel passes under the Argos Solutions scanner, which scans it for defects. During this process, the Argos Grading System will determine whether a panel is good, needs repair, or is a reject, according to customer-defined recipes for that specific product.

The result and data from the scanning is transferred from the grading system to each of the repair stations seamlessly. The two Argos repair stations (in this particular installation) consist of X-Y travelling heads which hold different tools for routing and face putty. The router mills out the defects and the adjacent putty injector repairs them. These tool heads can move back and forth in the direction of panel travel while repairing the different defects. The traversing heads are moved, with great speed and accuracy, by linear electric motors.

Argos Solutions AS was responsible for the design of the Panel Repair System, including the manufacture of the scanner, X-Y repairing tables and their router and putty heads.

The table in which the vacuum conveyor, designed and built by Biele, is located is fixed and stable to ensure accurate milling depth and to resist the pressure necessarily applied by the putty injectors. A flat surface to the plywood is also essential to avoid the putty being squeezed outside the defect area.

After filling, the panels are transported out of the Biele conveying system onto roller conveyors to go to edge trimming, then stacking to await sanding.

The activity on the Argos patching line seems frantic, with the heads moving along the line with the panels and then flying back to repair the next panel, while the router and putty injectors whizz back and forth across the width of the line, filling the defects, all at a rate of eight panels per minute.

Certain plywood grades require that both faces are filled and a turnover device supplied by Biele can be brought into play to turn the panels over and feed them back into the line.

The images recorded by the Argos scanning camera are stored on the system's computer, showing the defects and the tracks of the putty injectors for each and every panel.

The future
Pellos 2 is only the first plywood line to receive an Argos Panel Repair System; there will be four such lines running by the end of this year.

The second, as already stated, will be in Pellos 3, another spruce plywood line, with an annual capacity of 180,000m3.

The third and fourth lines have been ordered by CMPC of Mininco, southern Chile. These lines will have a joint capacity of around 500,000m3/year of radiata pine plywood and are due to be shipped to Chile in September this year, with handover in December.

Biele, in addition to supplying the handling technology for CMPC's panel repair line, will also supply the complete sawing line, including sawing heads, and the complete handling system for the sanding line. 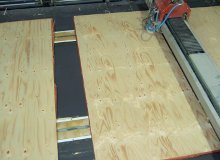 Vacuum nozzles in EVO Conveyor, between PVC timing belts. Tracks of the putty heads are just visible on the panel’s surface 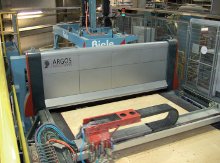 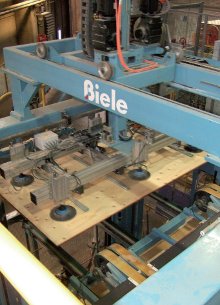