Double celebration to mark a centenary

With the assistance of a few far-sighted investors, he commissioned a bright young architect of the day called Walter Gropius to design his factory and office complex. The result was an exceptional example of the now-famous ‘Bauhaus’ architecture.

Recognised in Germany in 1947 as an historical monument, Gropius’ building finally gained formal international recognition this year when it was awarded the status of a UNESCO (United Nations Educational, Scientific and Cultural Organisation) Cultural World Heritage Site. This followed over 20 years of work by Mr Benscheidt’s descendant Ernst Greten, who recognised the great importance of the building.

“One of the key reasons for our receiving this award is the fact that not only are the buildings special for their Bauhaus architecture, but also that the factory is still used for manufacturing,said Uwe Kahmann, managing director of Fagus-GreCon, the holding company, and of GreCon.

Today in fact, the factory houses three manufacturing businesses: Fagus, still making shoe lasts, though on a smaller scale; GreCon, famous for its measuring systems for quality control and production optimisation and for its fire prevention equipment; and GreCon-Dimter, a joint venture between GreCon and wood machinery maker Weinig, which makes finger-jointing machinery for solid wood.

It also houses a museum open to the public and since the company’s centenary event in September 2011, visitor numbers there have increased from 1,000 a month to about 3,000. A new visitor centre is planned in one of the peripheral buildings to cater for these increased numbers.

The GreCon (named from Greten Consulting) business was founded nearby in 1970 by brothers Ernst and Gerd Greten, great grandchildren of Carl Benscheidt. They moved their business into the Alfeld premises in 1973 and took over the management of what became Fagus-GreCon.

This was at a time when the shoe last manufacturing business was in decline and moving overseas.

Having said that, Mr Kahmann was anxious to point out that shoe lasts are still an important part of the business and Fagus still supplies lasts (originally made in beech wood – fagus species – but now from plastic) to shoe companies in Europe, as well as making prototypes of lasts which are mass-produced in its own factories in the Czech Republic and Thailand; and at a joint venture in Belarus. The company also continues to hire new designers for this business and to install new machinery for shoe last production.

However, today, GreCon’s high-tech quality control equipment for panel making factories –and its spark detection/extinguishing equipment used in panel making and many other industries – are by far the largest proportion of Fagus-GreCon’s turnover.

The fact that GreCon and its sister companies are housed in historic buildings has not meant that they cannot adapt the spaces to enable the businesses to move forward, without affecting the essential character of the place.

For instance, the original production area for GreCon’s measuring systems became too small for the growing business and so, in 2007, that space was adapted for use as the research and development (R&D) centre for that business.

In 2011 it was decided to bring the R&D arm of the spark detection business into the same area and a mezzanine floor was installed to accommodate the 30-plus development engineers now working there across all GreCon’s range of products.

“We put all the engineers together to promote exchange of ideas between all development personnel on spark detection and measuring systems,explained Mr Kahmann. “Those two fields have come closer and closer together in recent years, especially with the increasing focus on software.”

But GreCon is not only thinking about the present, continued the managing director.

“Like most companies, we are looking for technical people for the future and we have always been strong in educating our own staff and we have our in-house apprentice scheme.

“These trainees used to be in another building on the site but this year we developed a new training centre in the shoe last production building to give a stronger connection to the company and the production centre,said Mr Kahmann.

A recent – and revolutionary –development for GreCon, showcased at the Ligna exhibition in Hannover in May/June this year, is the operating system for the spark detection/extinguishing equipment.

We were introduced to this by Dirk Saschenbrecker, head of R&D for fire protection. “We were looking for enhanced sensitivity and safety for our clients, as well as safe operation,said Mr Saschenbrecker.

“For today’s market we needed a touch-based operating system such as people are used to having on their iPhones, iPads etc. This is very unusual in industrial applications.”

So the system employs touch and multi-touch systems with the ability to zoom in and so forth by spreading fingers across the screen, just like those iPads.

The precise location of any spark incident shows up on a diagram of the plant layout on the touch-screen and the operator can zoom in on that area just by touching the screen, as soon as the alarm is sounded.

The operator can then touch that location on screen and all the details for that specific alarm are displayed.

“Historical data is very important,explained Mr Saschenbrecker. “Every event is logged to the millisecond because you want full monitoring of the integrity of the spark extinguishing system – water flow, hydraulics, electrical integration, operation of all sensors and so on.

“It was hard to keep an overview of all the data in older systems, but now it is a simple matter of sliding through the lists on the screen.”

The system will also show up if a spark incident is recurring in the same place and indicate if there is a problem with, for instance, the wood raw material quality or the dust collection system.

On the same touch screen, it is also possible to call up a graphics video of how the system works, or to view and flip through the instruction manual.

“Another very new development in our spark detection/extinguishing systems is ultra-high-speed extinguishing,continued Mr Saschenbrecker. “Sometimes the length of pipe between a fan and a bin on a dust extraction system is not sufficient to allow for conventional detection and extinguishing. However, extending that pipe costs money and often requires a more powerful fan.

“We therefore developed a special valve and a special nozzle to reduce the time between the detection and extinguishing by a factor of three. Normally you would need up to seven metres of pipe, but with the ultra-high-speed system you need less than two metres,said the R&D manager.

The system employs a high-speed solenoid valve, as well as specially adapted spray nozzles that close automatically after operation to prevent contamination of them. These nozzles are also flush-mounted in duct walls to avoid obstruction of the air flow. In operation, they generate a fine full-cone water mist, which, says GreCon, increases extinguishing efficiency without over-wetting.

The GreCon business is roughly equally divided between these spark systems and measuring systems, explained Mr Kahmann, while the business is truly global.

“Asia is becoming increasingly important for our products and represents about 20% of our business today,he said. “This involves sales directly to the mills, through our subsidiary office in Shanghai, and through the main equipment suppliers such as Dieffenbacher and Siempelkamp as part of a complete-line supply contract.

“This growing percentage of our sales to the Asian continent is why we formed our Chinese subsidiary six years ago, our sales office in Thailand three years ago and our office in India this year [2011]. We also work with independent representative companies in several other countries in the Asian region.”

GreCon holds sales and technical training meetings for all its partners each year in the form of a three-day meeting for an exchange of ideas and information, as well as training on the latest technology.

Kai Greten, nephew of the founders of GreCon, spoke about the company’s new surface inspection technology for panels, premiered at Ligna.

“SuperScan has so far been employed in inspection of decorative surfaced panels, but now we have added two fields to that: raw panel; and fibre view.

“The first installation, in an MDF plant in Germany, has been running since September 2011 and is even detecting chatter marks.

“For the fibre view, the machine takes a camera image after the former and gives information on-the-line on fibre distribution. This kind of [instant] fibre analysis is unique to us.”

Also launched at Ligna was the GA5000 Gas Analyser to measure formaldehyde emissions, in the laboratory. It is a dual-chamber gas analyser and GreCon has received several orders for it since Ligna.

Another new product at Ligna was GreCon’s ContiLog. This is a sensor which is placed in the mat on the belt during forming to record temperature and pressure throughout the pressing process.

In particleboard and OSB production, the ContiLog sensor is placed in the mat after the first core layer spreading machine and followed through the press by means of a mark made on the mat edge.

To place the ContiLog in MDF mats, an additional insertion mechanism is required. The positions of the ContiLog sensor at the press inlet and outlet are marked via the reader for later data synchronisation.

The data is radio-transmitted to a hand-held computer/receiver. The principle is that the user can build up a picture of the trends in his panels over time and so can adjust press speed/strategy to maximise panel quality and optimise the panel production process.

Panel makers can either buy the electronic chips and hand-held computer for their own use, or a GreCon technician will come and do the tests for them.

GreCon says it has sold around 300 chips since Ligna.

The foregoing are some of the latest innovations from GreCon but they have also been well-known for many years for their wide range of thickness gauges, blow detectors, moisture analysers, the Dieffensor and the BWQ Traversing gauge.

The main line suppliers are experiencing very strong business in new lines and this is reflected in GreCon’s order books, as well as its sales for retro-fits to existing panel lines. “Business is good,said Mr Kahmann.

“We have taken on 15 staff in the group this year – three in R&D and seven in after-sales technical support, spare parts and repairs. We have also taken on Willy-Sebastian Metzger as marketing manager to coordinate our activities worldwide, especially on the internet functions.”

German machinery makers supplying the panel industry have had an extremely positive couple of years and GreCon is no exception.

“We have not seen any slowdown in business and really it is as good as we could wish for,concluded Mr Kahmann. 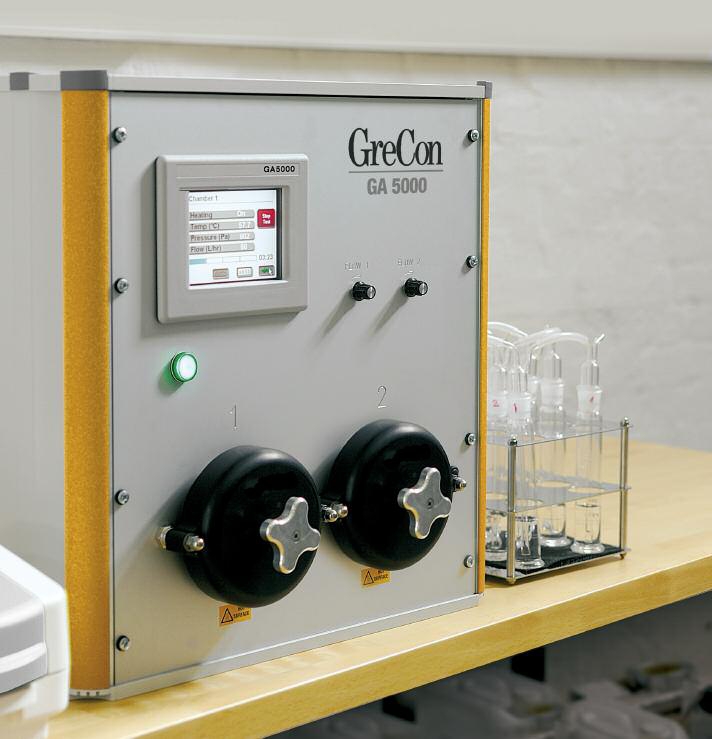 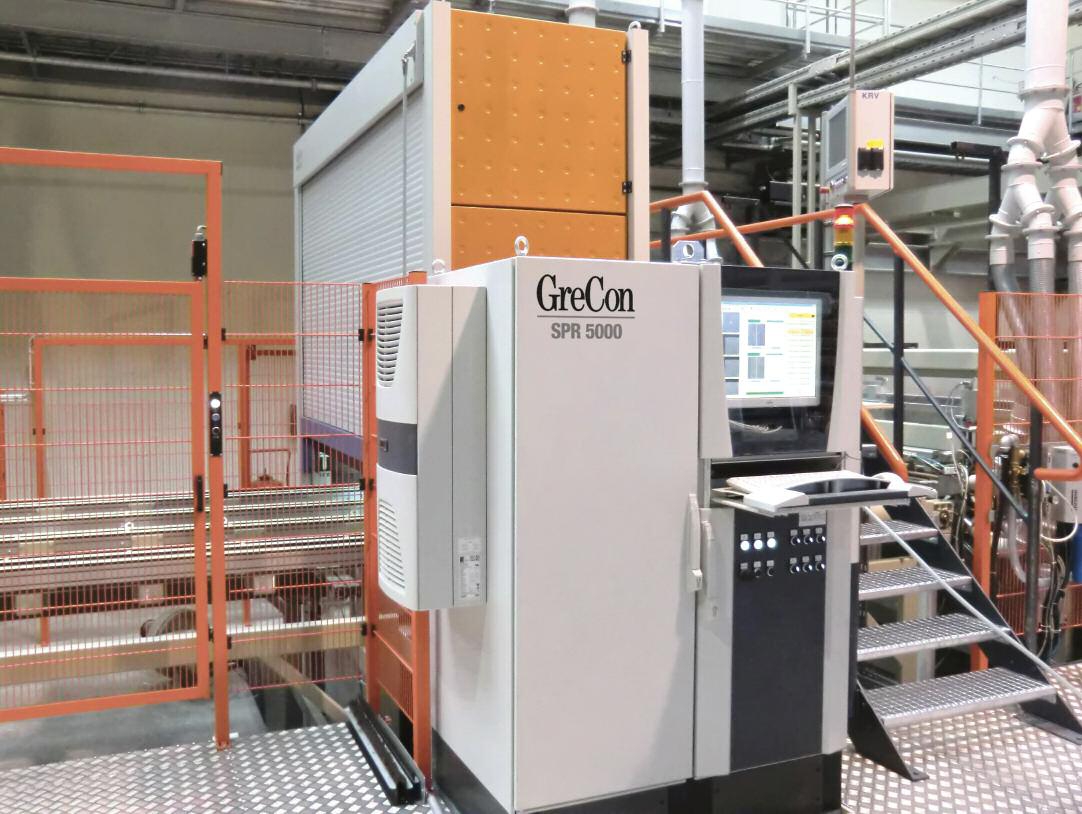 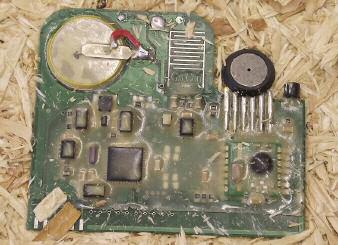 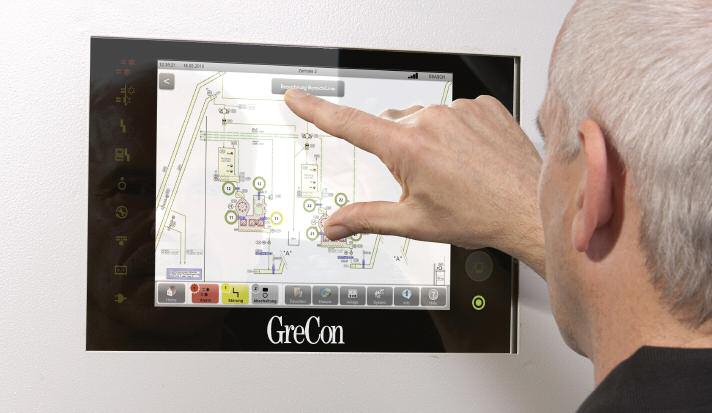 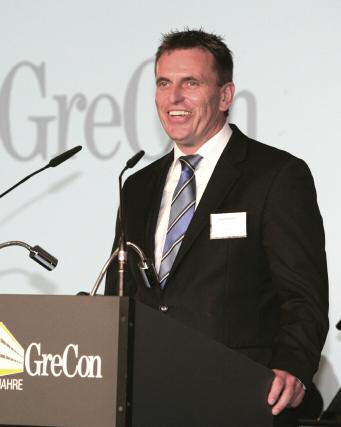 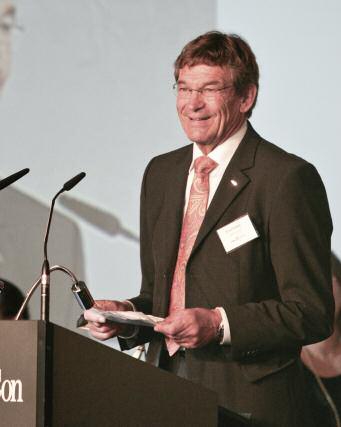