Business is good for single-source supplier

In spite of all the storms battering the world economy in the past few years, the Siempelkamp ship has apparently managed to sail safely on through these uncharted waters to achieve record success in all its markets.

The company is formed of three major divisions: machinery and plant; foundry; and nuclear technology. All three divisions are doing well and have been for the last few years, according to managing director, machinery and plant (Maschinen-und Anlagenbau), Heinz Classen, when interviewed in early November at the company’s headquarters in Krefeld, near Düsseldorf.

Machinery and plant is the division responsible for equipment for the panel industry and currently accounts for about 60-70% of group turnover.

“We have been very busy for several years and the factory has been running overtime,said the managing director. “Although the order intake in 2009 was a little lower, it [the global economic crisis] did not really affect our business.”

Of course, Siempelkamp’s markets are truly global – wherever there is wood (or usable agricultural residue) and wood based panels being made from it, there is Siempelkamp. This means that there is usually business to be had somewhere in the world; hopefully if one region is down, another is up.

One market that has been consistently ‘up’ for some years now is China, but Mr Classen admits that may be changing.

“China is a little bit quieter these days because the Chinese government is slowing down its economic growth, but we still have 14 lines of four foot width on order, with one start-up every two months. That should keep us busy for probably the next year.”

Siempelkamp already has a manufacturing and service operation in Wuxi in China (WBPI issue 3, 2010, p40) and is extending this facility. It employs 400 people and is currently located in three factory buildings, but the company planned to move the operation under one roof by the end of 2011.

Fortunately, however, China is not the only market that has seen strong growth in recent years. Turkey has surprised many in the industry by its consistent growth in panel production capacity, in MDF/HDF and in particleboard, in spite of its apparent lack of domestically-produced wood raw material.

“We are supplying two large particleboard lines which include the new CMC Texpan sifting and gluing equipment,said Mr Classen. “One is for Orma AS and this will produce its first board soon. The other is for Yildiz Entegre, close to Izmir, and this is planned to start production in May 2012.

“We also have the contract to supply one complete MDF line to Yildiz Entegre for its Mersin facility and another contract with them to supply a press line to replace an existing Hydrodyn line.

“Also for a Turkish company, we are supplying an energy plant and dryer to Kastamonu, but this time for its factory in Romania, and this is now under construction.

“Russia is another important market for us,added Mr Classen. “We have a big OSB line under construction there for DOC Kalevala near St Petersburg and we are supplying a complete MDF factory, including wood preparation, energy, everything, to Russian Laminates. This line is now under construction and has a 50m ContiRoll press.

“Another complete MDF line ready to commence construction is for ZAO PDK Apscheronsk in southern Russia and this has a 48m press.

“Both these projects were put on hold by the customer because of the economic crisis, but both are now well under way. We also have five lines under construction in Belarus.

“We have not lost one order due to the crisis, in spite of some being delayed.”

To emphasise the buoyant state of his company’s markets, Mr Classen said that Siempelkamp would expect about 10 complete line orders in a ‘normal’ year, but received 20 in 2010.

Siempelkamp also has three lines under construction in Brazil and four in South East Asia, including Dong Wha in Vietnam (MDF); Dong Wha in Korea (MDF); and Panel Plus (MDF) and Rayong (MDF) in Thailand.

Siempelkamp Maschinen-und Anlagenbau also opened a manufacturing facility in Blatnice, Czech Republic, on December 17, 2008 and has doubled its capacity there with a new factory building which commenced operations in 2011.

It manufactures a wide variety of panel manufacturing line components, ranging from mat formers to complete panel handling systems. An important advantage, says Siempelkamp, is that all orders from the wood based products industry which are not delivered within China can be produced at the Blatnice factory, from where it will be quicker to supply the European market. Since Blatnice is close to the Austrian border the location is also easily accessible, says the company.

Siempelkamp also says the factory enabled it to gain more independence from external suppliers, resulting in higher added-value within the Siempelkamp Group.

This bringing together of the manufacture of all the components required to build a complete panel production line from its own resources has been a continuing theme for Siempelkamp in recent years.

For instance, dryer manufacturer Büttner has been in the Siempelkamp group since it was completely taken over in 1995, but was located on the other side of Krefeld, in rented premises.

A new building, clad externally with white high pressure laminate, was nearing completion on the main Siempelkamp Strasse site at the time of my visit in early November and the company planned to complete the relocation of Büttner in January 2012.

Siempelkamp originally acquired 25% of CMC Texpan (located in Colzate, near Bergamo in northern Italy) some years ago and the two companies have worked closely together ever since, with Siempelkamp gradually increasing its stake to 70%.

As CMC Texpan’s former owner and current managing director, Dario Zoppetti, looks to retirement in 2012, he has entered into an agreement with Siempelkamp that it will buy his remaining shares in the business at that time.

In the meantime, CMC Texpan is one of  Siempelkamp’s globally distributed ‘regional engineering centres’ and taking on an increasing range of machinery manufacture in its two factories in Colzate.

Of course the company has been famous for many years for its forming stations for both particleboard and MDF production lines around the world, often, but not only, supplied through Siempelkamp, and for other machinery for particleboard.

Siempelkamp Energy Systems GmbH (SES), the specialist for energy plants, emerged from the takeover of part of Metso Panelboard GmbH in Hannover, Germany and has belonged to the Group since 2007.

What SES is to energy plants, Hombak Maschinen-und Anlagenbau GmbH is to machines for the front-end area.

For the size-reduction of recycling wood of all kinds, Hombak developed the hammer mill and the processed material can be used for further preparation, or for boiler fuel.

Siempelkamp says it can now supply complete production lines from the woodyard to finished, laminated furniture boards – all from one source.

“In the last two years, we have integrated the Hombak and CMC machinery very successfully,said Mr Classen. “The first project where we integrated the two was on a Metro Particle particleboard line in Thailand.

“At Ligna in 2011, we launched our Ecoresinator system for MDF blending. Starwood of Turkey had the first such system in operation and has made savings of 15% in resin consumption, with no additional energy consumption,said the managing director. “We have also sold systems to clients in Brazil, China and elsewhere in Europe.”

The Ecoresinator employs special nozzle technology, made by Schlick, and the use of steam to give such resin savings in a traditional blowline blending system. Siempelkamp supplies the system ready to install, including switchgear cabinet and automation software.

“The market is changing,said Mr Classen, referring to the company’s complete line capability. “It is moving towards less experienced panel manufacturing regions, where they prefer to have one company responsible for the whole line. The only thing we don’t offer from our own resources is the MDF refiner.”

One company very experienced in particleboard production, but new to MDF, is Panel Plus in Hat Yai, Thailand.

That company is installing a complete MDF line for start-up in early 2012.

Panel Plus bought two particleboard lines from the former STA company in Hat Yai back in 2004 and refurbished them so that they have been running ever since. Now, again with Siempelkamp’s help, the company is refurbishing the larger of the two lines for a second time. The smaller line has been purchased by Siempelkamp to be sold on to another customer.

One of the newest products for Siempelkamp is its first-ever strander for OSB. Not only that, it is a giant, which is under construction for the Kalevala OSB line in Petrozawodsk in Karelia, Russia, for which Siempelkamp is supplying all the machinery.

This will be the first strander sold under the Siempelkamp name, although Hombak has made stranders, but most significantly, it is a completely new design and will apparently be the biggest strander ever built in the world.

It has a diameter of 250cm and cutting width of 850cm with 56 knives. It also has a motor capacity of 1,250kW – an unusual load for Siempelkamp’s factory and requiring two diesel generators in order for it to perform test runs, or it may have blacked out the local area!

Siempelkamp also launched its new, Generation 8, edition of its ContiRoll continuous press in 2011. The company claims this new generation offers up to 15% savings in resin. The press has a brand new pressure distribution system between the platens and the frame and this prevents the ‘waves’ of pressure at and between the press frames which can impede the formation of glue bridges, wasting resin, claims the company.

The new ContiRoll also has more cylinders to give improved pressure distribution, while new additional pull-back cylinders on the upper platen are said to give improved steam escape and thus better board edges. As an option, these cylinders can also be installed two-thirds of the way down the length of the press if the customer wants to make lower-density board (<500kg/m3).

In the Krefeld factory there is much evidence of investment, including two portal milling machines as well as a new lathe for turning infeed/outfeed drums for ContiRoll presses and a new vertical milling machine.

For the last two years, Siempelkamp has been carrying out all machining in its own factory so it has full control of quality.

Nobody really knows what 2012 holds in terms of business and these are worrying times for everyone.

However, Siempelkamp appears to be in a strong position with plenty of work on the books to take its factory through the year. It also has the advantage of three ‘legs’ to its business; and global market coverage. 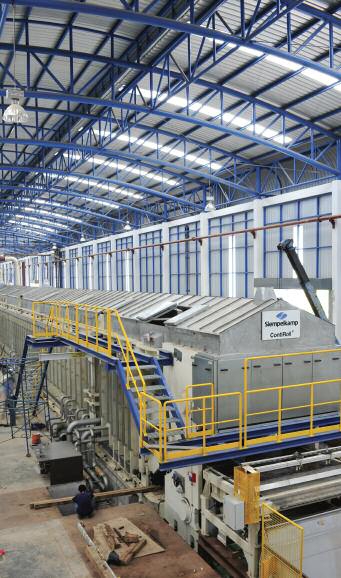 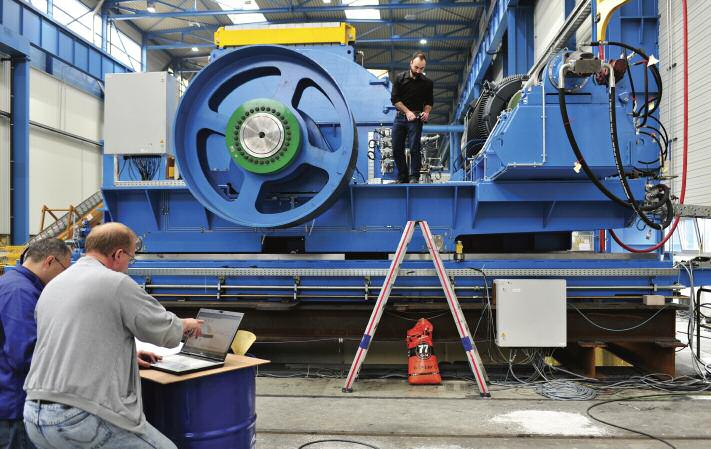 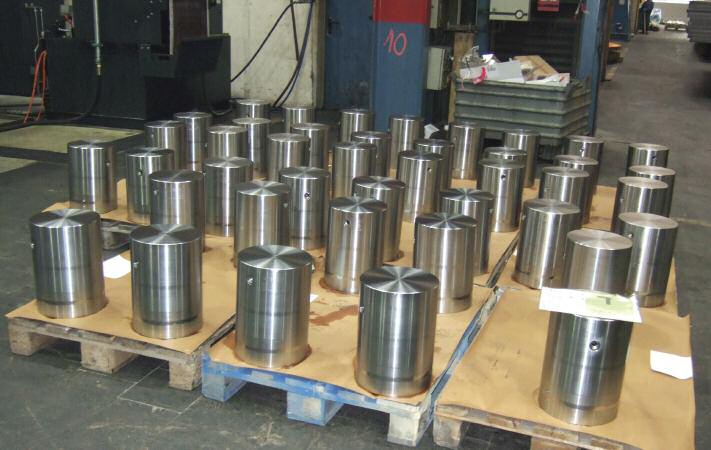 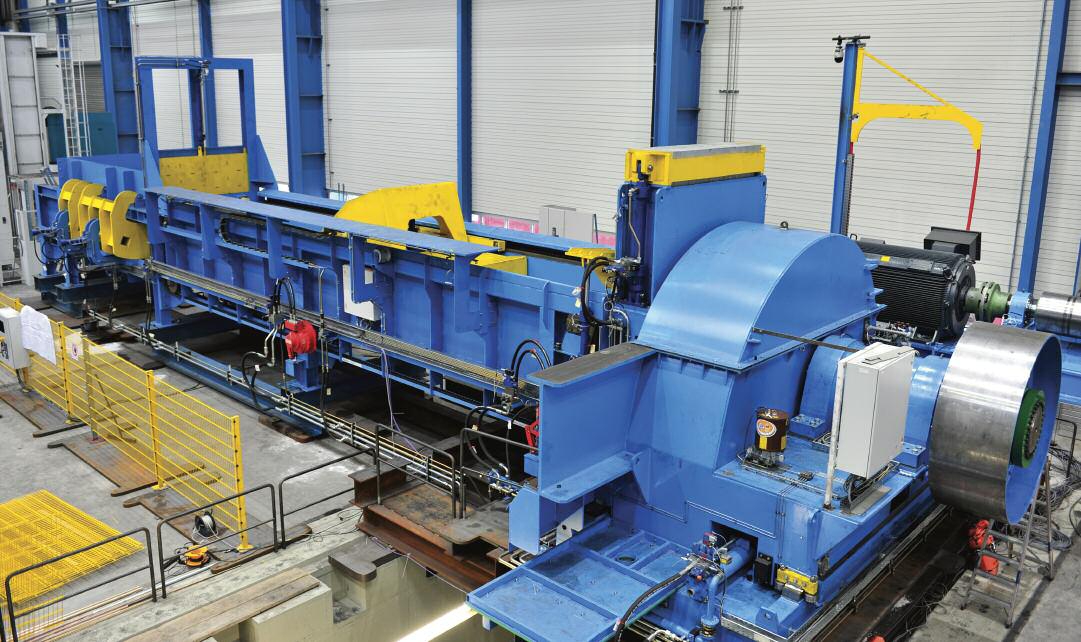