Building the future on strong foundations

Founded in 1999, but based on a much longer history, Binos GmbH makes a wide range of machinery for the panel industry. Mike Botting paid them a visit Today’s Binos was formed from the original Bison Werke company and is still in the same premises in Springe in northern Germany.

Bison had a long history in the supply of complete panel manufacturing plants, notably employing Mende-type calender presses, but also incorporating other manufacturers' continuous presses into its lines.

Binos 'took over the baton' from Bison in 1999 and the Greten family, which owned Bison, now owns Binos under Berndt and his son Tom.

While the Bison company ceased trading, its experience and expertise were continued as many of the staff, in the same factory today, came from the old company and can claim experience of more than 500 delivered plants, said managing director, sales, Bernd Westermann.

Binos currently employs 80 people and turns over €20-30m/year. It says it offers "technology, machinery and automation" to the panel manufacturing industry.

The product scope of the company in wood based panels comprises turnkey plants - including process automation - for particleboard, MDF/HDF, OSB and oriented particleboard (OPB) lines of 100-700m3/day.

The first such line started up in Kirov, Russia, in mid-September 2012.

This line can, for example, produce OSB in summer and particleboard in the winter, when logs might be frozen and good strands difficult to make.

There are separate forming systems and the particleboard sifting station is mounted on wheels to be moved out of the production line to allow OSB strands to fall directly onto the roller bed to distribute them on the forming belt. Maximum capacity for these Combi-System plants is 4-500m3/day.

There is also the supply of single machines; modernisations and upgrades of existing plants; engineering and training; and the supply of service and spare parts for machines old and new.

Pre-presses are also manufactured by Binos as part of its complete-line offering, as are star coolers at the end of the production line.

Another service offered by the company is the refurbishment of used presses.

An important area for Binos is in forming stations for particleboard and MDF.

"Our forming machines for particleboard work on the wind-sifting principle and we are seeing increasing interest in wind sifting versus mechanical sifting from the major panel manufacturers these days - at least for the surface layers," said Mr Westermann. "It produces better, smoother surfaces."

Resin/glue kitchens and blenders are another speciality.

One product with a long history for Binos is the wide belt sander and it still makes these solidly-built machines, with two to eight heads, suitable for all panel products (photo p40). At the time of my visit to Springe in late September, two sanders had been sold in 2012, - one four-head to Asia and one to Estonia.

Research and development (R&D) is an important part of the Binos philosophy and its R&D department at Springe has a range of equipment to test customers' raw materials (or potential new raw materials) and to refine existing processes.

The most recent installation, in a separate area of the workshop, is Binos' latest product, the scalper system, designed to reduce wastage and to remove the 'safety buffer' that many panel makers build into their mat height.

"What can be saved by using even 1% less raw material in a year?" asked Tom Greten, ceo of Binos, rhetorically. The answer, he said, is about €800,000/year in a medium-sized German particleboard or MDF plant.

The scalper has toothed motorised wheels (heads) made up of multiple metal discs with sharp teeth. Each head has a separate electric motor built into it and operates on a pivot hinged above the line, with height adjustment by a telescopic spindle. A three-metre-wide mat would need 30 of these heads, which turn in the opposite direction to the mat's direction of travel. The heads are angled to avoid making tracks on the mat surface.

By linking the segmented scalper directly with a Dieffensor material distribution mat scanner (developed jointly by GreCon and Dieffenbacher) and/or a GreCon High Precision Scale (HPS), the scalper heads can be automatically adjusted to set the appropriate height of the mat, creating a control loop where the line always runs at the optimum setting, explained Mr Greten.

"This way, it is possible to form a more uniform mat, allowing the producer to reduce the mean area weight, resulting in possible savings of wood and resin of more than 1% a year, meaning, in most cases, payback in a year," he said. "Alternatively, it is possible to adjust the scalper by reference to laboratory samples taken from the panel. However, the operator should be aware that such lab samples give only a very poor data base (less than 0.001% of wood), whereas the Dieffensor measures 100% of it."

Each segmented scalper is normally specific to a particular panel type, but the R&D shop has a universal scalper for test purposes.

For MDF lines, the scalper system is targeted at those with lifting elements under the forming line, too.

"The R&D line is designed to create ideal forming for all panel types, following the good example of my grandfather [the founder of Binos]," said Mr Greten.

Field tests in two German panel factories - one particleboard and one MDF - are currently under way.

"Forming machine tests have been conducted in our R&D department for the past three years and have produced a lot of feedback for the panel industry," said the ceo.

This service is not carried out free of charge, but if the project goes ahead, with Binos as the main contractor, the cost is deducted from the final invoice.

Training for newcomers to the industry is carried out in Binos' laboratories, with the cooperation of the WKI (Wilhelm Klauditz Institut) in Braunschweig in Germany. Oncustomer- site training is also offered.

"We have access to most [machine] drawings or can re-draw them if necessary," said Mr Westermann.

In the area of novel raw materials, Binos is working on the utilisation of the stems of date palm fronds and is working with a partner in the UAE to produce particleboard, shuttering and OSB with a capacity of 250-300m3/day.

These are the lower branches, or fronds, removed once or twice a year from the palm trees as part of the normal maintenance of the plantations. Similar possibilities exist for oil palm fronds, said Mr Westermann.

Thus we can see that Binos retains a strong connection to its heritage but also continues to develop new products and new solutions for the panel making industry worldwide. 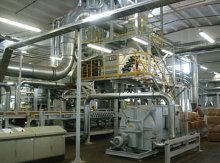 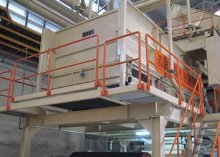 Motorised toothed heads in the Binos-Scalper 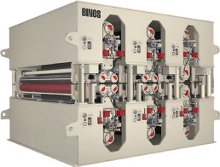