West Salem Machinery of Salem, Oregon, US has announced the development of a new screening design called the Waterfall Disc Screen.

The new Waterfall Disc Screen utilises two or more screening decks which agitate and tumble the mat of material being screened as it falls from level to level. The company points out that this tumbling movement is similar to a waterfall in that the mat is blended as it falls and fine particles that were in the upper portion now have a chance to be screened on the lower deck.

To make this possible, West Salem Machinery says it has developed a disc screen shaft manufacturing method that creates a tighter spacing between the discs, allowing the chipped or hogged materials to be sorted by size (thickness and length), but at a smaller dimension than in the past.

Dust, dirt and fine particles pass between the discs, while desirable and acceptable materials are retained above. This concentrates the fines and dirt so that they can be either diverted from the process, or re-screened to recover the maximum amount of organic material, says the company.

In particleboard manufacture, where dryer efficiency and pellet properties are so dependent on material thickness and size, the WSM Waterfall Disc Screen has an important role to play in sorting the sawdust and fine particles for optimum performance, often in combination with vibratory, or shaker, screens which are also manufactured and supplied by West Salem Machinery.

West Salem says that its Waterfall Disc Screen design is available for processing a variety of materials including wood products, agricultural waste products and any granular organic material where fines and dust are a problem. The welded discs are fixed to a sturdy tubular shaft, with large journals and bearings supporting and driving them from outside the dust-proof screen frame. The modular nature of this arrangement makes it easy to combine different sections and to use different disc spacing on each of the levels to target specific material fractions, if that is required by the process.

West Salem Machinery says it offers a full complement of screens and grinders to suit any application. 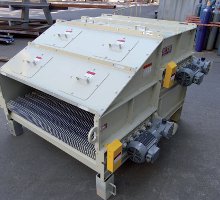 A Waterfall Disc Screen ready for despatch from the factory