Guangdong Wulian Wood Industrial Group Co Ltd already has a multi-opening MDF line on its site in the Qujiang district of Shaoguan city, north of Guangzhou in northern Guangdong province.

The company was co-founded here in 2002 by Mr Yang Yin Sen and four other shareholders, giving rise to the name Wulian because in Chinese, 'Wu' means 'five' and 'lian' means 'cooperation', he explained.

In 2003, Wulian was bought out by Mr Yang, when he built that first line, and today he is still chairman of the company.

At the time, Mr Yang was also the major shareholder in panel maker Luyuan Group.

He also built three other MDF lines in Guangdong: in Kaiping, Qinyuan and Yangjiang.

All four lines were from Shanghai Wood Based Panel Machinery Co Ltd (SWPM) and all had 18-daylight hot presses with a capacity of 50,000m3/year.

In 2005, Luyuan bought a Siempelkamp ContiRoll continuous press line for MDF and installed it at Yangjiang, which is not far from Shaoguan. That line went into production in 2006, at which time the SWPM line there was closed.

In October of that year, Mr Yang decided to leave the Luyuan Group, selling his shares and concentrating his efforts on his Wulian company.

Into particleboard
Fast forward to 2010 and Mr Yang decided to sign a contract with Dieffenbacher at the end of that year for a CPS continuous press line, but this time the panel to be produced was particleboard, not MDF - a new departure for both Wulian and Mr Yang.

The scope of supply for the German-headquartered oem was from flakers (supplied by Dieffenbacher subsidiary Maier) to the double diagonal saw after the press.

The existing Shaoguan site was large enough to accommodate the new line, being a total of 500mu (33ha) in area, with the SWPM MDF line occupying 120mu.

But that doesn't mean it was a simple matter of building a new factory and installing the machinery - far from it.

On one side of the site is a river and the ground rises steeply from there to a small 'mountain' on the other flank.

Groundwork started on moving that mountain in July 2011, excavating the land and using some of the spoil to raise the other side of the site, which was a wetland.

On the day of my visit in early March, 'wet' was the operative word and all groundwork was at a standstill as the rain poured down in unusually low temperatures for the time of year in Guangdong province.

The weather had been 'unusual' since the Chinese Spring Festival in late January, since when Mr Yang said it had rained every day, leaving his embryonic particleboard line location a veritable quagmire.

This was a major problem for his company as the first shipment of machinery was due to arrive on site in mid-April and the rainy season, which had been exceptionally wet, was not due to end until maybe the beginning of April.

"Because of the weather, we have only dug the press pit so far but we hope the weather will improve now," said Mr Yang. "Our target now is to get the framework for the factory buildings erected during May."

The chairman did not have a ready answer to the question of where to store the many crates of equipment on site when they do start to arrive, but seemed unruffled by the prospect.

Mr Yang has not only taken on a mountain and an unpredictable weather system in building his new factory, but has also taken the adventurous step of going for a particleboard line, rather than sticking with MDF, with which he is so familiar.

"The competition in the MDF market is very fierce today," admitted Mr Yang.

"I think since 2010, particleboard potentially has a very big market in China because there is big demand for kitchen cabinets and they want high-quality board. There is only Furen, Dare and Asia Dekor producing that kind of quality so that's why we decided to produce high-quality particleboard on our new line.

"Although I do not have experience of particleboard production personally, we have Mr Tian Gang and Mr Pen Dang, who have both worked at Asia Dekor in Huizhou and have a lot of experience in that production."

The particleboard project includes a separate resin plant from the existing one for the MDF line.

Resources and markets
Wood supply for the Shaoguan site comes from a 150km radius and is composed of mixed hardwood species. It currently comes from a mixture of forest and plantation sources, but mainly from plantations, said Mr Yang.

"In the future we will have two sources of wood - our own plantations and wood which we will buy on the open market. We will also use some recycled wood, in the form of waste wood from Shaoguan City, and sawmill residues.

"We have confidence in a good market for our particleboard and at a good price and so we will be able to pay good prices for our wood supply against our competitors.

"Initially, our main market for the particleboard will be in Guangdong province, but in the future we will open up markets in the east of China as well - in Shanghai, Jiangsu, Anhui and so on."

Asked about the prospect of producing value-added products at Wulian, Mr Yang said "That is something which is only in my mind at the present time - I am concentrating on getting the board quality right first."

The equipment
The equipment to be supplied for the particleboard line is an eclectic mix of different nationalities.

As stated earlier, the flaker will come from Maier as part of the Dieffenbacher supply.

However, the chippers will be sourced from Baolong of Jiangsu, China.

The energy system will be Chinese, from GTS of Shanghai.

By contrast, the entire multi-opening MDF line was sourced from Chinese companies, including the refiner and Sufoma sander.

The challenge
Mr Yang has taken a bold step in moving into particleboard for the first time and in tackling a site with very difficult terrain.

The unusually wet and cold weather experienced widely in southern China this winter has certainly not made things any easier for the construction of his new factory.

However, this is a man with considerable experience in panel production and a team of engineers experienced in making good quality particleboard.

Many people are once again saying that particleboard is the future in China, in which case Wulian should hit the market at just about the right time. 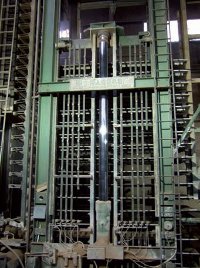 The multi-daylight SWPM press for MDF 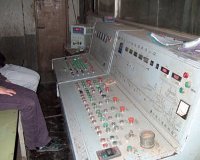 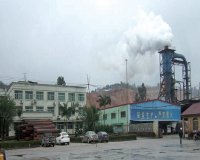 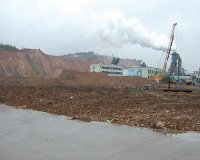 A construction site in suspended animation 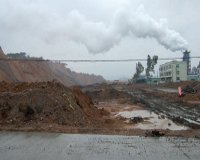 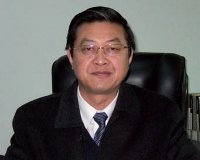 Mr Yang is not new to panel making 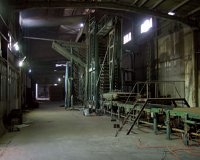 Production hall for the MDF line 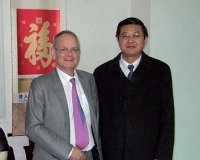