Vietnam now has the longest and biggest-capacity MDF line in Asia, at the VRG Dongwha MDF factory in Binh Phuoc province, not very far from Ho Chi Minh City. Mike Botting visited the site to bring us this report.

The VRG Dongwha MDF factory is a joint venture between Vietnam Rubber Group (VRG) and very experienced panel maker Dongwha of South Korea. The two companies own 49 and 51% of the equity, respectively.

Vietnam Rubber Group is also not entirely a newcomer to making MDF, having a small Dieffenbacher single-opening line at Quang Tri on the east coast of Vietnam.

The VRG Dongwha MDF factory currently utilises less than half of a 38ha site on the Minh Hung lll Industrial Park in Minh Hung Commune, Binh Phuoc province, and has a very large woodyard. The company is located about 100km from Vietnam's biggest city, Ho Chi Minh (formerly known as Saigon).

The joint venture companies chose this location because of the plentiful supply of wood raw material, mainly in the form of rubberwood, most of which comes from VRG's large expanse of plantations, although some is purchased on the domestic market, from many farmers with small plantations. Also in the mix of the wood supply is some acacia, cashew nut tree and the native species melaleuca. The latter has a flaky bark similar to the outer skins of onions. Acacia's bark is 'stringy' and so both species offer some challenges to debarking machinery.

"Our market is mainly the Vietnam domestic market as the country currently imports a lot of board from Malaysia and Thailand," said Kim, Yang Il, MDF plant manager. "There are other MDF lines in Vietnam but they are small capacity at around 60,000m3/year," Mr Kim explained.

The designed capacity of the VRG Dongwha MDF Siempelkamp ContiRoll line, on the other hand, is 300,000m3/year (15mm basis).

The site also has its own resin plant, producing formalin and resin for the MDF factory.

The main part of the panel production is to CARB (California Air Resources Board) Phase 2 emissions standard and is mainly sold to furniture manufacturers in Vietnam, which export their production to the US, although some E2 grade is also produced for the domestic market.

Other 'resin-based' grades offered are E0 and moisture resistant. The latter is bought by the Vietnamese domestic market for interior furniture and decoration due to the moist climate, explained Jason Lee, who is the chemical plant manager.

VRG Dongwha MDF also offers a latex-free grade of MDF as a special grade not utilising rubberwood in its manufacture.

"The real key to avoiding problems with latex in the board is the efficiency of the debarking process and then the efficiency of the fibre sifter," said Mr Kim. The factory is equipped with a sifter from Scheuch, supplied through Siempelkamp, and Mr Kim said he was very satisfied with its performance.

"For the first year, we are focusing on supplying our own MDF line with resin, but we have had some interest from the market as well. However, there are a lot of chemical companies already in Vietnam, and some in Malaysia, so there is competition," said Mr Lee. "Currently we are concentrating 100% on our own MDF factory."

The chemical factories - and the entire MDF production line - required an environmental assessment as part of the planning application process for the factories.

The MDF line
At the heart of the VRG Dongwha MDF factory is that giant Siempelkamp Generation 8 ContiRoll press, which is 47m long x 8ft wide.

"This is the longest press and the largest capacity MDF line in Asia, including China," said Mr Kim proudly when WBPI visited the site in late April.

"We are currently producing at a rate of around 250,000m3/year, depending on thickness and emission grade of the MDF we are making. The board that complies with CARB Phase 2 has to be run more slowly than other grades."

Excavation of the site and civil construction of the buildings began in March 2011 and installation of the production machinery followed in the June.

The first board was produced on February 24, 2012 and commercial production followed about three weeks later.

Siempelkamp's contract encompassed the forming, pre-press and ContiRoll press, while Siempelkamp Handling Systems supplied the cooling, stacking, grading and transport systems, with intermediate storage on concrete bearers, where up to three days' stock is held. On-the-line quality control is supplied by Siempelkamp subsidiary Sicoscan and was designed in association with Electronic Wood Systems (EWS) of Germany.

The debarker was purchased from Malaysian company Hoe Heng, while the main chipper came from Hombak of Germany (a Siempelkamp-owned company) and a secondary chipper was sourced by VRG Dongwha MDF from Sung Jin of Korea.

The refiner came from Metso of Sweden and is a 64in Evolution Defibrator.

Sanding is carried out by a Steinemann of Switzerland 10-head machine, which is followed by GreCon DMR 5000 thickness gauges.

The cut-to-size system is by Maier, which supplied the mechanical parts, while Siempelkamp supplied the electronic controls. The main sizes produced are 3 x 5ft, 6 x 7ft and 6 x 8ft.

The energy plant producing heat for the thermal oil and the dryer was supplied by Vyncke of Belgium and has a 59MW capacity, burning 100% wood fuel.

Fire protection for the entire production process, including 'Minifog' for the ContiRoll, was supplied by Minimax, while Kidd System explosion protection covers that particular risk, especially at the mat former. GreCon also supplied its BS7 infrared spark sensors to many areas of the factory.

Siempelkamp's day-to-day business in Vietnam is handled by its agency, Euroasiatic, with offices in Ho Chi Minh City. Metso also has an agency in Vietnam and offices in Thailand.

Thicknesses of HDF/MDF manufactured are from 2.5 to 38mm.

There are no value-adding facilities at the Minh Hung factory, so only raw board is made.

Remote locations in developing countries often have some problems with the large electricity demand from an MDF factory, especially the refiner, but VRG Dongwha MDF has few problems in that direction.

"We have a reasonably reliable electricity supply, although it is turned off for one day a month and the voltage can be a little unstable, but it has a very small impact on production," said Mr Kim. "We knew the position before we started this project and have invested in our own cabling from the sub-station to the factory."

At the time of WBPI's visit, the woodyard was generously stocked with wood raw material as it was the dry season, when logging is easy, and it is advisable to build a good stock before the rainy season disrupts supplies. There was about six weeks' supply at the time of our visit.

"Every product has a different mix of wood and each species and type is stored separately," pointed out Mr Kim.

Much of the wood comes in quite small trucks, which are unloaded by hand.

International standards
Walking around the MDF factory of VRG Dongwha MDF in Minh Hung, one could in fact be in any state-of-the-art panel factory anywhere in the developed world.

The company, no doubt heavily influenced by Dongwha's extensive experience in panel making, has included all the environmental, safety, and quality control features you could expect for such a line and the factory is scrupulously maintained and produces a high-grade MDF/HDF panel which it can confidently sell on both domestic and export markets. 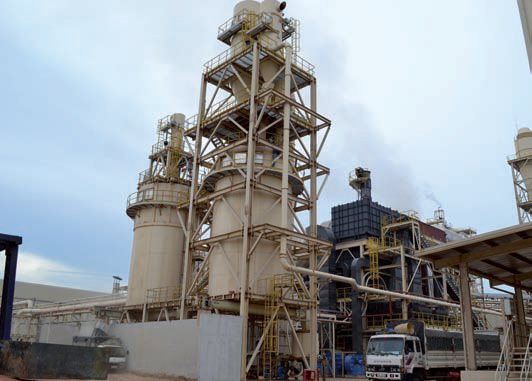 Vyncke energy plant, behind the silos 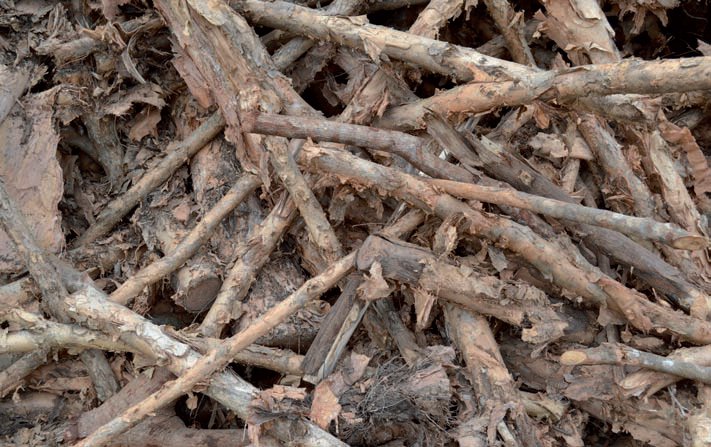 Melaleuca logs with their unusual bark

The 64in EVO Defibrator refiner by Metso 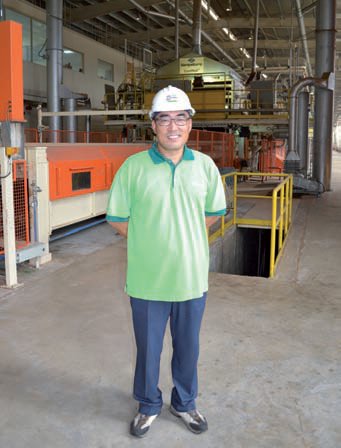 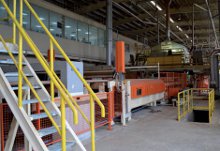 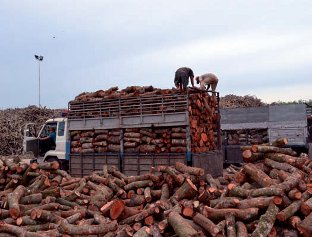 Logs often come in small trucks which are unloaded by hand