Italian finishing specialist Elmag-Superfici has new updates to its technology in response to market demand. Stephen Powney reports from the company’s base in Monza.

A desire to look at the surface finishing sector led WBPI's Focus on Italy to Monza.

The city, notable for being home to the Italian Grand Prix, is also the base for finishing specialist Elmag-Superfici, a company founded in 1946 and part of the SCM Group since 2004.

Originally a classic woodworking machinery producer, the company's venture into surface finishing started in the 1970s when it created a dedicated division after it acquired Superall. Product range grew further when Valtorta, which had launched the curtain coater on the Italian market, joined in 1995.

SCM merged the separate Elmag and Valtorta operations in 2008 as part of a re-organisation and they moved to a single site under the Elmag-Superfici name. Today annual turnover is around €15m and 95% of production is exported.

Managing director Dario Tropeano told WBPI that investment of up to €50m across the SCM Group in recent years had provided benefits, such as manufacture of common components at SCM's Rimini factory, while retaining a high degree of flexibility.

"We do not feel as if we are in a big group but we are looking to have the synergies of such as big group."

He believes there are positive market signs, with the US economy expected to pick up and increasing interest in finishing technology within Europe.

Elmag-Superfici returned to the Xylexpo exhibition in Milan this year and though it may not have met the company's expectations in terms of overall size and international visitors, it was a platform to communicate new product updates.

One of these is its new LED system for curing of UV lacquers.

Gloria Valtorta, Superfici marketing manager, said the technology had big potential, though the high initial installation cost was a barrier to some customers. "But this technology will be coming more in the finishing market," she said.

Ms Valtorta said UV LED curing benefits include reduced power consumption - up to 80% compared to traditional systems - and elimination of overheating of materials to be lacquered, as well as less production downtime.

The Superfici system's Touch Eco-logic controls each single driver (feeding from 1-3 LEDs), while the LED generator has instant start/stop, with no heating or cooling time.

The non-ozone producing nature of UV LEDs means no air suction systems are required and there is less maintenance for the machines as they do not cause premature oxidation.

Superfici's new Mini automatic "plug and play" sprayer taps into the trend for increased customer production flexibility but at reduced investment cost levels.
The Mini can operate in small batches, with spraying of varied flat or moulded workpieces on surfaces and edges.

The conveying system features a paper protection device, whereby the paper is automatically unrolled and rewound at the work-piece throughfeed, protecting the conveyor placed below and absorbing the overspray.

An option allows installation of a small container to feed the guns instead of using a pump, allowing low pressure spraying with small quantities of lacquer.

It not only detects the shapes and sizes of the loaded work-pieces but also designed to reconstruct their thickness profiles, allowing selective spraying of mouldings and grooves - suiting glue spraying on panels for membrane pressing or for antique effect staining.

It allows lacquering of workpieces with a variety of shapes, individual finishing specifications, a quick colour/product change and savings on glue application.

A further update is the revised Compact 3 automated sprayer, giving smaller companies cost-effective access to the advantages of automated lines.

New features are the hybrid conveying system to aid production flexibility and a "filter on demand" filtering system as an alternative to dry filters. 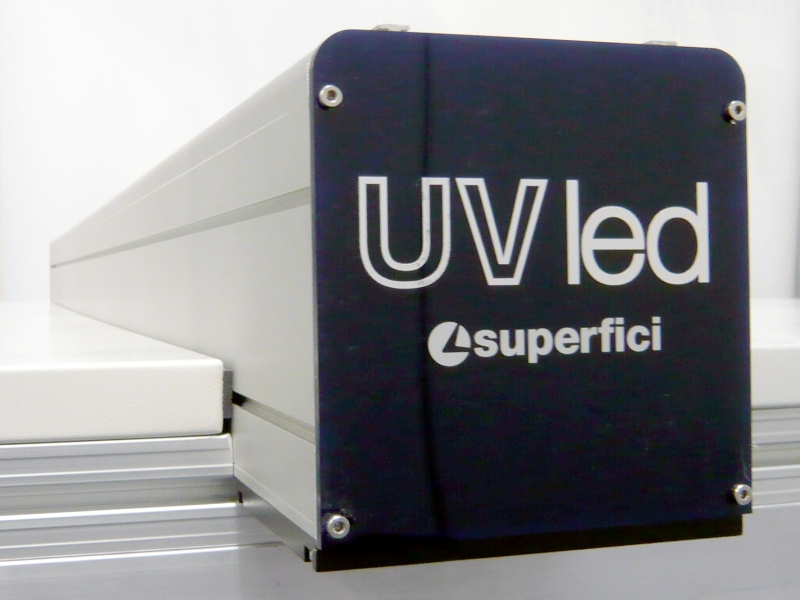 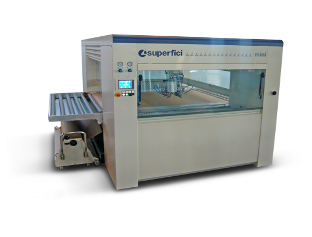