As the market momentum builds for particleboard in China, Guangdong Shixing Huazhou Wood Co Ltd is about to join the ranks of major producers of that panel with its new continuous CPS line

Instead of buying his own line, in 2004 Mr Zhang rented a state-owned line that was built in 1996 and threatened with closure.

The machinery was supplied by local company Xinyang Wood Machinery Manufacturing Co and had a capacity of 12,000m3/year of particleboard.

In addition to this rented line, Mr Zhang's company also owned two particleboard lines in Xinfen, Jiangxi province, made by Kunming Machinery. They were built in 1997 and each had a capacity of 7,000m3/year.

However, these two lines were closed in 2011 because they were too close to the city and the local government didn't approve. Also, a new continuous line was on the way, rendering them redundant.

Again in Jiangxi province, in Gangzhou City, the company still has a discontinuous particleboard line of 20,000m3/year capacity, supplied by Northwest China Forest Machinery Co. This line was built in 2004.

In 2007, Huazhou ordered a new multi-opening MDF line from Shanghai Wood Based Panel Machinery Co (SWPM) which went into production in 2008 with a capacity of 50,000m3/year from a 20-opening press. This is also on the Gangzhou site.

In 2009, Mr Zhang decided to build a continuous particleboard line on a 300mu (20ha) site which the company owned in Shixing County, Guangdong province.

Accordingly a contract was placed with Dieffenbacher of Eppingen, Germany, for a complete line.

Building work on the site began in 2010 with the construction of the storage building to give accommodation for some of the machinery when it arrived in December 2011 and undercover space in which to assemble components during the (very) rainy season.

At the time of my visit in early March 2012, all the buildings for the production line were almost complete and all the imported machinery for the whole line had been delivered, with some locally supplied components outstanding.

The press assembly was well on the way to completion, while other components were still standing around in crates in the yard and in the storage building.

The company intended to produce its first board in June this year.

The Dieffenbacher contract covered from the dryer to the storage area. Storage will be on rows of concrete bearers.

The dryer was manufactured by Baolong to Dieffenbacher drawings.

Chipping also came from Baolong and the energy plant from Changzhou Union Boiler.

Other exceptions to the Dieffenbacher supply were the sifting and gluing systems, which came from Imal-pal of Italy, who supplied Pal Superscreens and separate sifters for core and surface layers, while Imal supplied the gluing system.

The four flakers, and the refiner for oversize material, came from Pallmann of Germany - all these suppliers were the customer's own choice.

The wide-belt eight-head sander is from Imeas of Italy and the cut-to-size angular saw system is from Anthon of Germany.

The Dieffenbacher CPS press is 8ft wide and 20m long and the designed capacity of the line is 200,000m3/year, with the intention to produce mainly 12 to 18mm thick board.

Chief engineer for the project, Li Yue, said the intended market for the particleboard production is furniture manufacturers in Guangdong province such as Red Apple, a well-known brand of kitchen and living room furniture.

"There is a shortage of particleboard in this province because there are these big furniture manufacturers and only Asia Dekor has a continuous line and can make the high-quality board demanded by this market," said Mr Li, who spoke perfect English, having previously worked for a particleboard mill in Thailand.

"The CPS line will enable us to produce high-quality board at lower cost, and using particleboard instead of MDF will in turn enable our customers to lower their costs.

Wood supply is always an issue in China, but Huazhou says it has a local supply, within a 70km radius, of mixed hardwood species. It does not intend to use recycled wood at all - only fresh wood, said Mr Li.

"I am happy there is a good supply for the future," he confirmed.

Huazhou's particleboard line, when it is finished, will be the only continuous panel production line in Shixing County, he said.

With an eye to the future, Guangdong Shixing Huazhou Wood Co Ltd bought another site of similar size to this one in 2011, in Dayu County, Jiangxi province. So what are they going to build there? 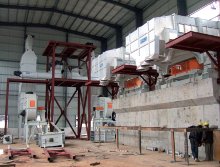 Crates of machinery behind the office block 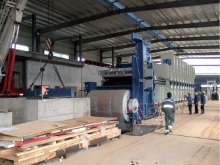 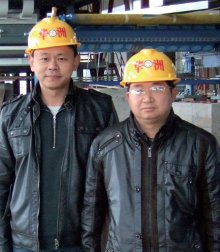 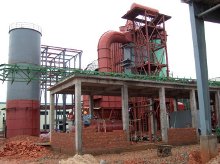