Russia’s Ugra-Plit is to establish the largest OSB plant in the western Siberia and Ural regions. Our Russian correspondent Eugene Gerden reports.

Ugra-Plit, one of Russia's largest producers of particleboard, based in the Khanty-Mansiysk Autonomous Okrug (Yugra) - a centre of Russian oil production - plans to establish a new plant for the production of OSB, expected to be the largest in the Russian western Siberia and Ural regions.

The project investment is estimated at R3.5bn (US$100m), with design for the project completed by the local Kostromalesproekt company and much of the equipment for the plant to be supplied by Siempelkamp Maschinen und Anlagenbau GmbH & Co KG.

The commissioning of the plant is scheduled for the first half of 2016. During the first stage it will have the capacity to produce about 200,000m3 of OSB per year, while later this will be increased by at least 250,000m3. Payback period for the project, which is personally supported by the region's governor Natalya Komarova, is estimated at six years.

The new OSB plant is to be built close to Ugra-Plit's existing particleboard facility at Sovetsky, which currently has an annual production capacity of 264,000m3.

"Design documentation for the project has already been completed," said Maxim Nikulin, general director of Ugra-Plit.

"In addition to new OSB production, we are planning to establish a plant for the production of resins for the wood board industry. All three production facilities will be closely linked in a single timber-processing complex. This will allow us to make their activities more efficient."

Siempelkamp signed the supply contract with Ugra-Plit at the Lesdrevmash exhibition in Moscow last year and is now in the planning/engineering phase. It will be the main supplier of equipment for the project, with Pallmann supplying the front end.

For Siempelkamp, it is another supply project to Ugra Plit, having been a main technology supplier for the company's particleboard production plant at Sovetsky, which pressed its first board in 2010. The particleboard facility, featuring a 7ft x 18.5m ContiRoll press, produces panels with a thickness ranging from 6 to 40 mm.

The site is located in an area of Russia that has one of the highest wood resources, with some 54% of the region (which extends to 530,000km2) covered in forests. This area has wintry weather for up to seven months of the year, with temperatures reaching as low as -40°C.

The state-run company originally invested in the particleboard project to revive the local wood based materials industry, to increase added value production in the country, and to diversify beyond gas and oil production.

Meanwhile, looking at the wider Russian forest products industry, analysts at the Russian Ministry of Industry and Trade have been warning that there is a possibility that implementation of forest industry projects may be suspended, due to mutual sanctions imposed by Russia and Western countries.

Due to sanctions recently imposed by the US and the EU on the supply of production of dual-use items to Russia, as well as the supply of high technologies along with high-tech solutions for numerous segments of Russian industrial production, the Russian government is considering imposing a ban on the supply of Western technologies for domestic wood and wood processing industries, including the segment of wood based panels.

Recently, Dmitry Medvedev, Russia's Prime Minister, said that after the ban on imports of agricultural products from western countries, Russia is "potentially ready to introduce protective measures" in the national wood processing industry. He said "it should be done sensibly, because the government understands the importance of co-operation in this area and adequately evaluates its own capabilities."

The range of possible measures is very wide, from the increase of tariffs for the imports of industry equipment, to the imposition of an entire ban on the supplies of equipment for Russian production facilities specialising in the production of wood based panels.

According to some top officials in the Russian Ministry of Industry and Trade, the government may ban imports of industry equipment in a response to recent sanctions, but this could have catastrophic consequences on the Russian forest products industry, as Russia is currently experiencing a lack of domestically-produced quality equipment.

Dmitry Rogozin, Russia's first deputy prime minister, has said that Russia will be able to launch the production of the needed equipment for the domestic wood industry in the near future, but the majority of analysts believe that implementation of these plans may take up to 5-7 years.

At the same time, in addition to the industry's equipment, a ban may also apply to finished products, which may result in a significant increase in prices in the domestic panel market.

A ban on supplies of the industry's equipment may be included in the second package of sanctions against the EU and the US, which is currently being considered by the Russian government. 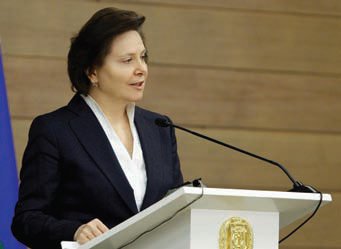 Natalya Komarova, the governor of the Khanty-Mansiysk