Roseburg Forest Products, founded in 1936, has a number of plywood, MDF and particleboard mills, as well as lumber and engineered wood facilities and value-adding operations. In 2019, the company launched a massive laminated veneer lumber (LVL) plant to be built in Chester, South Carolina.

“We are a closely held forest products company, building value with timberland….. we are vertically integrated, with timberlands and facilities across North America,” says the company.

Roseburg is largely self-sufficient in its timber supply, owning and “sustainably managing” approximately 600,000 acres of timberland in Oregon, Virginia and North Carolina.

That is a long list of manufacturing facilities, but this year saw the addition of a very important new facility in the form of a very high-capacity LVL line, which produced its first board on September 19, 2019 and had its official opening on October 28. As we went to press, however, we heard that the line is not yet fully completed due to delays by one of the machinery suppliers, so was not running commercially at that time.

The new line is located in Chester, South Carolina and boasts the highest-capacity LVL press in the world.

The project, on Lancaster Highway, was first announced in early 2017 and the construction team broke ground later that same year. When fully operational, the plant will employ approximately 145 people from the area.

Roseburg says it carried out extensive research prior to choosing a location for the new plant.

“South Carolina is a great state to do business in,” said Roseburg president and chief executive officer Grady Mulbery. “Our research showed that this region was an ideal place to locate this facility, with its steady demand, healthy market and bountiful wood supply. Chester County and the state of South Carolina stood out, offering outstanding support and assistance as we navigated through the process.”

“What started out as an undeveloped plot of land is now home to a state-of-the-art manufacturing facility, thanks to the efforts of a team of people with the vision and knowledge to make it happen,” added Roseburg’s owner and chairman Allyn Ford.

“Because of those efforts, 145 people will have jobs that did not exist before, and 145 families will earn a stable income in a safe work environment that contributes to the overall health and prosperity of this community and this state.”

The Chester facility will produce LVL headers and beams used in residential and commercial construction.

Dieffenbacher of Eppingen, Germany, was awarded the contract to supply the heart of the LVL line, with a 65m-long CPS+ continuous press with a daily output capacity of 800m3. It will be the world’s largest continuous LVL press, as measured by production capacity. Meanwhile, the upstream 600kW microwave heater, also supplied by Dieffenbacher, will be the most powerful pre-heating system of its type in LVL production, says Dieffenbacher.

The machinery supplier says that in order to produce high-quality LVL in its systems, the veneers are evenly heated to 60-90°C in the microwave, over the entire mat thickness. The special design of the CPS press infeed means the distance that the mat has to travel “without pressure”, on leaving the microwave until reaching the maximum pressing pressure, is less than 2,500mm. This prevents pre-curing of the resin and means that fast-hardening glue can be used to increase production speed and capacity, explains the company.

In addition to boosting capacity, the combination of microwave and CPS also enhances board quality, says Dieffenbacher. It adds that, when compared to production on a multi-opening press, the continuously produced LVL boards have more consistent mechanical properties and significantly lower thickness tolerances.

Subsequent sanding is not necessary, claims Dieffenbacher, saying that unsanded LVL boards can be used directly as scaffolding planks and unsanded veneers can easily be pressed into high-quality boards.

It adds that its LVL technology enables board thicknesses of up to 120mm and allows MUF adhesives to be used in the top veneer overlapping area. Boards with these properties have been produced in practice at Dieffenbacher-supplied plants at Nelson Pine in New Zealand and at Pacific Woodtech in the US, says the company.

“We obviously knew of Dieffenbacher’s previous LVL projects and these references are among the reasons that we ultimately chose it as our supplier,” said Grady Mulberry. “The short distance between Chester and Dieffenbacher’s service centre in Alpharetta, Georgia, is another plus for us.”

Obviously, there is a lot more to the LVL production process than the pressing system. Raute was awarded a contract worth over €11m for the complete lay-up line. The co-operation between Roseburg and Raute has existed for many years, with Raute delivering projects of various sizes to Roseburg’s plywood and LVL mills.

Raute supplied a very high-capacity LVL lay-up line, which was delivered in late-2018. The equipment was engineered and produced in Raute’s North American unit in Delta, Vancouver, Canada.

It included a new Human Machine Interface (HMI) and Raute says it is a particularly interesting one, as it is 3D and shows the entire line, including dialling into a specific process or part of that line in real time. The company says it is currently the most advanced PLC software available.

USNR’s systems are used in the production of dimensional lumber, plywood and panels, finger-jointed components and engineered wood products. The original company dates back to the 1850s, although it has absorbed a number of well-known names in the woodworking machinery industry over the years.

The company employs over 3,500 people in more than 200 communities throughout North America.

Roseburg says that demand for LVL in the US has been growing steadily in recent years and by building this new LVL mill, it was responding to that demand and the company says it intends to maintain its strong market position. 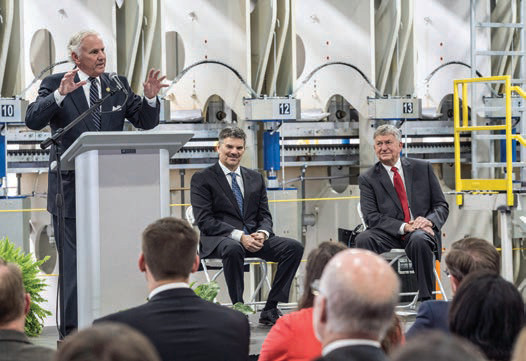 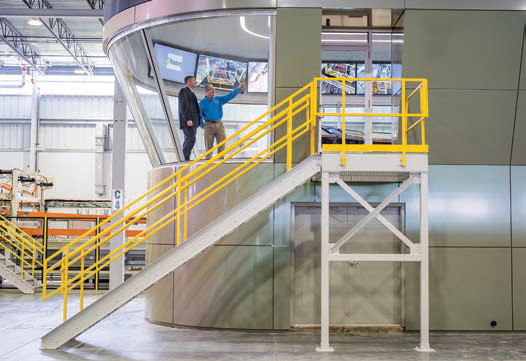 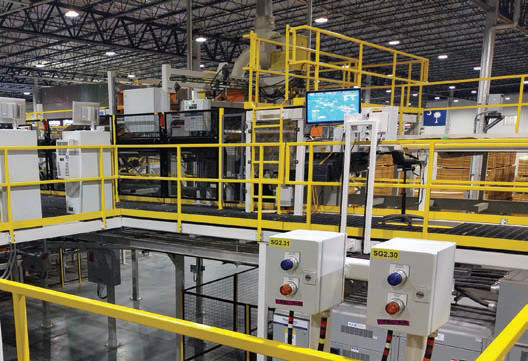