At the end of 2019, Arauco started up the first new particleboard mill in North America since 2001, in Grayling, Michigan. Its continuous press has a rated capacity of 800,000m3 per year.

This latest project for the Arauco company in North America was a greenfield development in Grayling to produce particleboard and it is claimed that this 800,000m3 a year-capacity mill will be the largest on that continent when running at full capacity.

Explaining its reasons for locating here, Arauco said that the town of Grayling offered multiple location advantages over other potential sites:

Construction of Arauco's Grayling particleboard operation commenced in April 2017 and it officially opened its doors on April 16, 2019.

Gathered for the grand opening and ribbon cutting were board members and executives from Chile and North America, state and local officials; and Arauco employees and project suppliers.

Arauco says the Grayling facility is the most modern and productive mill of its kind – and marks the renewal of the composite panel industry in North America.

The new mill is located close to the famous Great Lakes and the border between the US and Canada and involved an investment by the Sonae Arauco group of US$450m.

For the first time, the company has purchased a complete production line from Dieffenbacher of Eppingen, Germany, placing the order in late-2016.

Arauco says that Grayling represents a transformation of its distribution model. Its warehouse is the largest in the group and meets customer needs for short-haul trucking, offering just-in-time delivery.

The company adds that the 820,000ft2 particleboard and lamination operation in Grayling is the company’s first greenfield facility in the US, its 11th North American manufacturing site and the largest of its kind globally.

The operation is designed to be one of the most productive in the world and houses North America’s highest-capacity, single-line, particleboard press; two thermally-fused laminating (TFL) lines and a large warehouse holding stock for just-in-time delivery.

However, Arauco plans to utilise only 150 of those acres, or 25% of the total acreage, for the plant operations, which will be located on the far west side of the property, near the I-75 highway exit ramp, in order to optimise the logistics for transporting both raw materials and finished panels.

The remaining 75% of the site will remain forested and, out of concern for both public and employee safety, no hunting or trespassing will be allowed on the property, points out the panel maker.

Arauco says that the sustainable use of forest resources is important to Michigan, and that the company looks forward to continuing that tradition. In addition to creating significant economic benefits, the company says its manufacture of composite panels will extend the effective and efficient consumption of regional forest resources by utilising more of each tree, as well as wood by-products such as wood chips from local manufacturers.

In fact, the nearby location of local sawmills, along with the region’s abundant wood surplus, is among the reasons Arauco found Grayling attractive as the site for its new plant. It is estimated that once operating at full capacity, the plant will utilise only 30% of the surplus regional forest resources on an annual growth basis. At the same time, of course, the forest will continue to grow.

The company says the plant features the latest technology which will meet or exceed all international, federal and state safety and environmental standards. Certifications will include ISO 14001 (Environmental), OHSAS 18001 (Safety), FSC (Forest Stewardship Council) and will be an ECC (Eco-Certified Composite) certified mill.

In addition to the economic benefits the project will bring to the regional community, Arauco says that its particleboard plant will extend the effective and efficient use of forest resources with under-utilised wood and wood chips from local manufacturers.

Commenting on the new Grayling mill and Arauco’s role in North America, Arauco director Kelly Shotbolt, a well-known figure in the international panel industry for many years, said: “It is the attention to the unique needs of local markets that is the hallmark of Arauco’s business approach. The company has invested generously in each of the mills in North America to ensure that the mill offerings, capacity and quality are tuned to customer requirements.

“This is most evidenced in our newlyopened Grayling particleboard operation. Equipped with Arauco’s resources, we have built one of the most incredible wood panel facilities imaginable. The Grayling mill represents Arauco’s largest investment in North America to date, and is constructed to be one of the most important, most modern and most automated composite panel facilities anywhere in the world.

“Grayling will produce a board of exceptional quality that is lighter, that is stronger, and made with the most recent efficiencies that we could ever build into a facility. We've located this mill close to our Midwest customers so we can take the freight out, and support those customers that have stayed true to this region, to help them to sustain and grow their businesses,” concluded Mr Shotbolt, who has since retired as a full-time executive at Arauco North America.

The continuous CPS+ press supplied by Dieffenbacher is 52.5m long, with a width of 10ft. Included in the scope of supply are Dieffenbacher’s EVOjet P gluing system, which it says uses up to 15% less glue.

"Arauco always exercises prudence when it comes to committing to new development. Therefore, we are all the more pleased with the confidence that Arauco has shown in us with its decision to choose the CPS+," said Bernd Bielfeldt, head of the Wood Business Unit at Dieffenbacher.

The contract also includes dosing silos for the chips, a glue mixing station, forming stations and the forming line; as well as the raw board handling system, the sanding line and the Lukki stock system – with which Arauco has already had good experiences at its other sites, said Dieffenbacher.

The new production site in Grayling will manufacture particleboard with a thickness of 6-40mm, intended almost exclusively for furniture production. 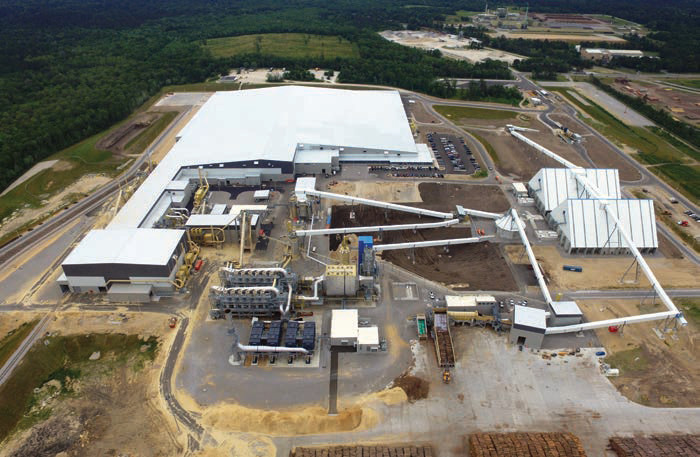 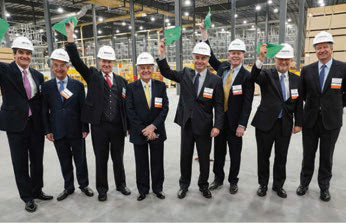 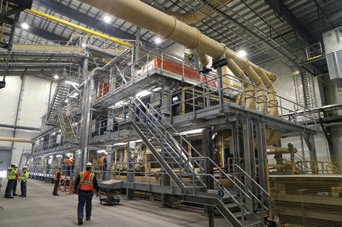 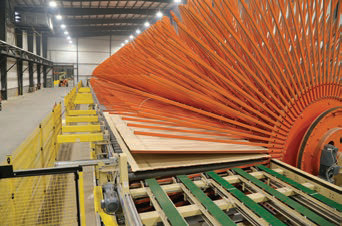 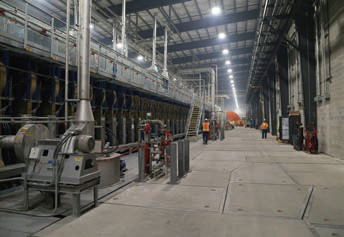 Down the line from the press 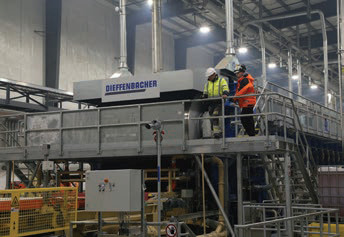