This is the second instalment of our world survey of the particleboard industry, covering the production lines operating as at the end of 2014 in countries outside Europe and North America. Mike Botting looks at planned new capacity in "the rest of the world" and analyses the market trends in 2014, 2015 and beyond.

In Part 1 of our survey of the status of the global particleboard industry in 2014 - mills within Europe and North America - we were able to report several new production line projects under way or planned, not all of which were in the areas normally expected.

We have become used to eastern Europe dominating the news in terms of new capacity in OSB, MDF and particleboard in Europe, while North America has not built any significant new panel production capacity at all for some years.

However, for our survey of the particleboard industry in 2014, we were able to report new particleboard lines in both western Europe and North America, as well as substantial new investment in those eastern European countries.

In Germany, we reported that Rauch Spanplattenwerke of Markt Bibart this year commenced installation of a new line with a Siempelkamp ContiRoll Generation 8 continuous press with a capacity of 630,000m3/year.

Italy was the other western European country we reported to be building a new line. Panel maker SAIB of Fosadello di Caorso has bought a Siempelkamp forming and press line, again using the ContiRoll Generation 8 continuous press, but this time with a capacity of 310,000m3/year. Installation of this line commenced in October 2015.

In Eastern Europe, we also reported in Part 1 that a total of nine projects are off the starting blocks in Russia, with a total anticipated new capacity of 3,090,000m3. These new lines will have a mixture of Siempelkamp and Dieffenbacher continuous press lines.

Also in the last issue, we were able to report that, at long last, North America, too, is increasing its national production capacity for particleboard, with a new line being built by Arauco North America in Grayling, Michigan. This will be a very large capacity line when it comes on stream in late 2018.

A second project on that continent is not quite so dramatic, this time in Canada: Uniboard is increasing the capacity of its Val d'Or line by 40,000m3/year, to give a total theoretical capacity of 403,000m3/year.

In Bangladesh the Akij Group, as reported in last year's survey, aims to start production on its 260,000m3/year Siempelkamp ContiRoll Generation 8 continuous press line in 2016. This will be the first continuous line in that country and was ordered in March 2014. The press will be 8ft wide and 23.8m long. It will also be one of the world's most modern particleboard lines, according to Siempelkamp.

The German machinery giant will supply all components, from the chipper infeed to the fully-automatic sanding and cut-to-size lines, including the entire materials handling section. All equipment will be manufactured inside the European Union.

These components, apart from the press, will include the company's Ecoresinator blending system for the particleboard core layer, as well as optimised control of the pneumatic conveyors, which Siempelkamp says ensures reduced raw material use and maximum energy efficiency.

Numerous Siempelkamp subsidiaries and affiliated companies will contribute, including Sicoplan of Belgium for the plant engineering, Pallmann of Germany for the front end and Büttner, also of Germany, for the dryer. Screening and sifting technology will be provided by CMC Texpan of Italy.

In last year's survey, Berneck's new line was shown in Table 5 as having a capacity of 800,000m3. Whilst this is correct, the project is to be built in two halves, so in this year's Table 5 we have separated the two parts of the project into two lots of 400,000m3 each. We do not currently have anticipated start-up dates, so the two phases both appear in "beyond 2016".

With the difficulties facing the Brazilian economy, it suggests one can't be sure that all new panel projects will be completed, but at the time of writing, they were still progressing.

Of course the story from China is very different now to the one a couple of years ago.

The economic situation in the country, and the rapid expansion of its panel producing capacity, has meant that the brakes are being applied quite firmly, as we all know. However, there are still four particleboard projects in the pipeline.

Last year, we showed five new projects, but two of those have now been moved to the main listings as being in production. One is the Zhangzhou Hongwei Woods project in Guangdong province, which is a Dieffenbacher line with a designed capacity of 300,000m3.

The second is Henan Shangqui (180,000m3) in Shangqui province. This is a line supplied by Dieffenbacher's Chinese operation Shanghai Wood Based Panel Machinery Ltd (SWPM), with a four feet wide continuous press made in the Shanghai factory.

In Table 5 'Future Capacity Development' for this year's survey, of 2014, the list includes Jianfeng in Bazhong, Sichuan province. This is a large, 600,000m3/year, project utilising a Siempelkamp ContiRoll 8ft x 43.7m press. It is due to start production in 2016.

Furniture and panel manufacturer Ganzhou Aigesen is to replace a small, multi-opening particleboard plant in Ganzhou City, Jiangxi Province, southeast China, with a modern particleboard plant equipped with a Dieffenbacher CPS continuous press. The furniture manufacturer predominantly uses wood waste from its own facilities for producing boards, as well as bought-in recycled wood.

Two Dieffenbacher Windformer SL units for the surface layers, and a core layer head, will be within the forming station. The CPS 2.65 x 24m press produces boards with a width of up to 2,480mm and thicknesses of 6 to 40mm. The components to be supplied in the finishing line area include a diagonal saw and a trimming and splitting saw.

The plant is designed for an annual output of 270,000m³ /year and start-up is planned for the end of 2016 or early 2017. Ganzhou Aigesen is one of the larger furniture and panel manufacturers in China.

One Chinese company intent on innovation, the Wanhua Company, is a specialist manufacturer of pMDI resins but is looking for new markets.

Wanhua is considering rice straw as a raw material for panels and has ordered a Dieffenbacher CPS press line to manufacture such boards, initially on a relatively small scale (265,000m3/year); a further roll-out of larger capacity lines is intended by Wanhua.

As last year, we can report that Dieffenbacher has the contract to supply a continuous press line to a still-un-named company In Iran. The capacity will be around 240,000m3/year.

A new country added to the forthcoming capacity in Table 5 this year is Malaysia: Allgreen Timber Products Sdn Bhd has ordered a Dieffenbacher CPS continuous line for its mill in Segamat in southern peninsular Malaysia.

The company will also supply a drum dryer; the raw board handling with diagonal saw; edge trim and split saw; a large stack formation system; and a raw board storage system.

Start-up is planned for spring 2017. The new line will replace an existing Bison plant, which has an elderly two-daylight hot press, also by Dieffenbacher.

Allgreen is part of the Evergreen Group, with MDF, particleboard and furniture factories in Malaysia and Thailand.

In Thailand, Green River Panels is building a second Dieffenbacher line to go alongside its existing one at Songkhla in the south of the country. The plant, named 'Eagle Eye', will have an 8ft x 27.9m CPS continuous press and a capacity of 300,000m3/year (this information was not available in time for last year's survey). The ordering of the new line also marks Green River's 10th anniversary.

Start-up is scheduled for the third quarter of 2016. The scope of Dieffenbacher supply includes a drum dryer of 5.2 x 27m, forming line and press line and the twin diagonal saw. Imal-Pal is supplying a Dynascreen roller screen for chips; two Pal Superscreens; two Pal sifters for surface and core layers; and dry silo extraction systems for both layers; while Imal is supplying glue preparation, dosing and blending.

The energy plant is supplied by GTS Energy, while Holzma is responsible for the angular book saw and Imeas the eight-head sanding line. Fire detection and extinguishing is to be provided by Firefly and GreCon. Eagle Eye is also destined to make a lightweight board as well as standard density panels.

Also in the "land of smiles", Thailand, Metroply ordered a particleboard line from Dieffenbacher in May 2015. This line will have a 40m-long CPS+ continuous press and start-up is planned in the east of the country in 2016. Design capacity is 300,000m3/year.

Economic outlooks
As expert economist Bernard Fuller of Cambridge Forest Products Associates (CFPA), pointed out in his assessment of the Latin American economies in the last issue of WBPI (Issue 5, 2015, p44), economic performance in the region is generally disappointing and the outlook doesn't seem to hold a lot of promise. He reported that Brazil was in recession, with its economy forecast to shrink by 2.1% by the end of 2015. Political turmoil, corruption, hesitant economic reforms and under-investment were, in Mr Fuller's opinion, indicating that Brazil's medium-term prospects were "not rosy".

He also suggested that the shrinkage would continue throughout early 2016, with possible modest growth later in the year.

Chile, traditionally one of the stronger economies of the region, is also suffering because growth has slumped, along with commodity markets such as copper. However, growth is expected to have been seen in that country when 2015's results are analysed. Growing exports of plywood are likely to have shown a healthier rise than those of particleboard (or MDF) and that is expected to continue into 2016, together with steady domestic consumption of MDP - medium density particleboard (we do not differentiate MDP and conventional particleboard in this report).

Turning his attention to China, Mr Fuller expected further slowing in GDP growth in 2016, with expansion reducing to 6%, or possibly as low as 4%, on a quarterly basis.

Summary of capacity changes
Looking again at Table 5, we can see that a total of 4,575,000m3 of new capacity is planned in Bangladesh, Brazil, China, Iran, Malaysia and Thailand in 2015/16 and beyond.

The increases over the years are also reflected in Table 6. After a blip between 2011 and 2012, global capacity has increased year-on-year to give a predicted world total for particleboard in all its forms (ie including MDP in South America) of 104,146,000m3 for "2016 and beyond".

The increases predicted in Table 5 for Brazil (1,925,000m3) and China (1,285,000m3) mean substantial growth in the national capacities of both countries going forward. However, both nations have their serious economic problems, as mentioned earlier, and one might well question where such increases in capacity will end up. Some say that China still has need of more particleboard capacity, although few would argue that enough is enough for MDF in that country for the foreseeable future.

But then, as mentioned earlier, forecasts in either nation are fraught with difficulty. 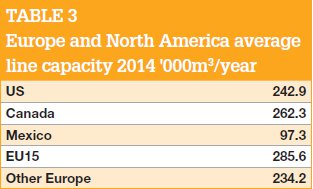 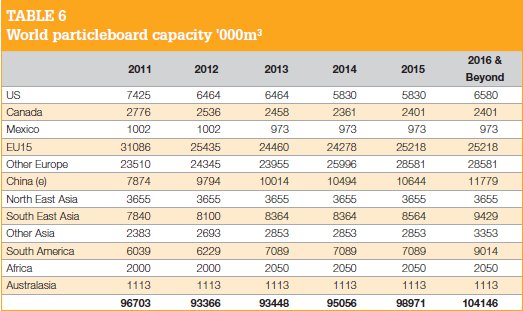 TABLE 1 - Mills outside Europe and North America at end-2014 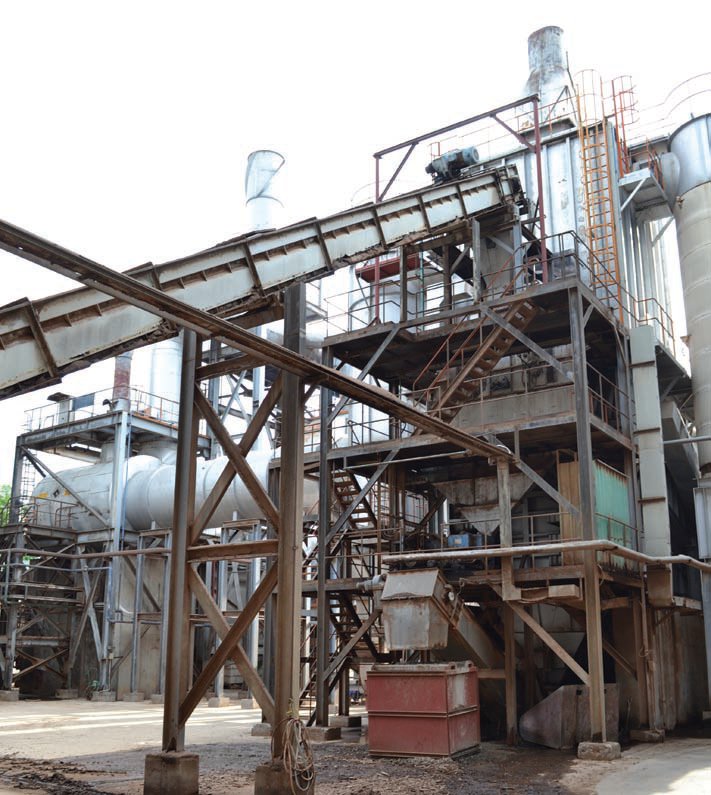 Line one at Green River's site in Songkhla, Thailand is soon to be joined by a second line 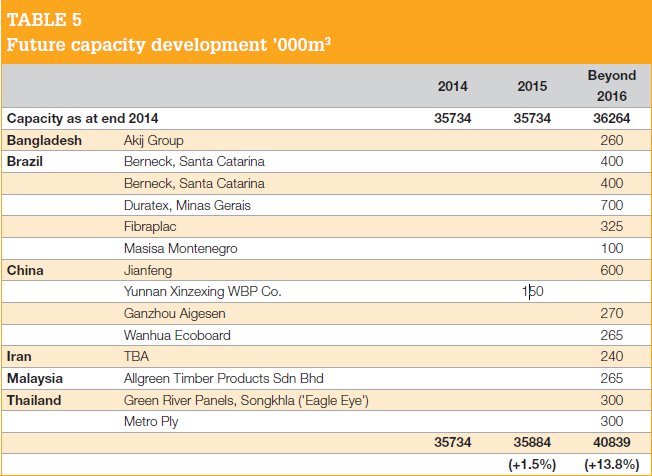 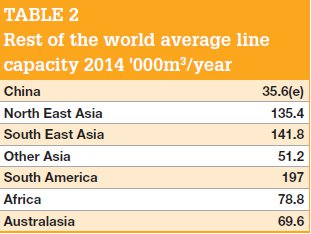