Bernard Fuller of Cambridge Forest Products Associates (CFPA) brings his exclusive annual report for WBPI on China’s economy in the past year and says new records will be set in production and consumption, even as growth slows.

China's panel production and consumption continue to climb and new records will be set, even as growth rates slow.

Recent assessments of China's growth potential continue to be re-visited by economists and China's own political leadership. Three years ago, the consensus would have been looking at China's growth (as measured by GDP) to be around 8-10% per year for much of the following five to 10 years.

Entering 2014, expectations are much more subdued as it becomes clear that the double-digit growth rates that often characterised the last 15 years in fact reflected the 'Rostovian take-off' stage of economic growth.

Clearly, China's economy has taken off and it continues to climb, but the angle of the climb is now not as steep (just as when an aircraft soon after taking off transitions from a steep to a less steep rate of climb as the aircraft heads towards its cruising altitude). WW Rostow developed this analogy for economic development 50 years ago, and it is still a useful metaphor for understanding the process of economic growth in the developing world.

Another way to look at China's current transition is to explain the change as a rebalancing between several sectors of the economy, away from investment and exports towards greater consumer spending. Shifting the relative weights of these economic drivers in turn reflects the need to maintain a growing standard of living within China.

China's rapidly-growing middle class is focusing more on the quality of its life and this is expressed through higher-quality housing and increased spending on better quality food, consumer goods such as furniture and electronics, as well as more leisure time, resulting in vacation trips and second homes.

This is a standard pattern in economic development, repeated several times throughout the post-Second World War period, most notably in countries such as Japan, South Korea, Germany and other European countries; and increasingly in the Americas.

China's new political leadership is clearly aware of the transitions occurring in China's economy - and of China's place in the global economy. For the last two years (2012-2013), China's GDP growth has averaged around 7.6% per year, well below the 9.6% average of the preceding three years (2009-2011). Expectations are for growth to continue at or slightly below recent levels in the next two years.

Table 1 presents our forecast for GDP slowing to 7.2% in 2015 - and a level as low as 7% could easily be acceptable to China's new leadership.

China's investment needs are also changing; the building of massive countrywide infrastructure has been largely accomplished. From here forward, the issue will be maintaining and upgrading that infrastructure; and de-bottlenecking public infrastructure (subway lines in those cities with the most chronic traffic issues; water and sewer systems; local highway projects; more productive port and distribution structures, etc).

On the export front, China will remain a major exporter of manufactured goods for many years to come, but an appreciating currency will further erode international competitiveness, particularly in those industries and products with high raw material input costs and/or low labour productivity. This is both a challenge and an opportunity for China's manufacturers. Increasingly, China's manufacturing exports will move further up the quality and complexity curves and their focus will shift more to value-added rather than high volume, low quality products. Other Asian countries will take over this portion of global manufacturing and China will increasingly become an importer of low value manufactured and semi-manufactured goods.

Possible implications of restructuring
In balance, the implications of this economic transformation for China's panel markets will be positive. While the role of China as an exporter of furniture will diminish over time, the huge and growing domestic market, driven by a rapidly growing middle class, will increase furniture demand and boost China's production of furniture dedicated to supplying the domestic market.

However, not all the long-term increase in China's furniture demand will be placed at domestic furniture factories; a growing portion of that demand, particularly from fashion-conscious Chinese buyers, will likely go to European and North American furniture designers and producers, providing opportunities for furniture exporters in those regions.

In construction, the massive government programmes to provide low-cost urban housing for a population moving from rural to urban areas has contributed significantly to the supply of housing. Some estimates have been made that in the past year or two, China has witnessed a shift from producing too little housing to producing more than current demand would justify.

Clearly there is a huge backlog of unmet housing needs in China, but if it continues to build more homes each year than demographic and replacement demand would support long-term, then housing output will inevitably drop from its recent high levels, thus affecting the demand for all wood products used directly in construction and in the interior finishing and furnishing of those units.

However, this is not an immediate concern for the next few years, but rather an issue for the end of this decade and for the next one. Nevertheless, housing demand will remain relatively strong for at least most of the next 20 to 30 years as the emphasis in China's housing markets will shift from providing basic shelter to building higher quality and larger homes - and providing an increased supply of suitable housing for its ageing population, including assisted living and other similar facilities.

Japan provides a guide to this upgrading process in the 50-year period after the 1950s. There is no reason to believe that an increasingly prosperous population in China will not place a significant portion of that growing wealth and income into upgraded, larger homes, better equipped with cabinets and furniture more reflective of improved economic status.

The housing story in China in 2012-13 has been somewhat confusing. Home price increases have been large in certain cities (such as Shanghai), but other areas saw much less pressure on prices. Initially in 2013, new housing construction was limited by the overhang of excess construction from 2011-12; there are long lags between the beginning of construction and the occupancy of a unit. For purposes of forecasting, CFPA focuses on square metres (m2) of housing completed; in 2013 it looks as if total housing completions will be little changed from 2012 (see Table 1).

However, a pick-up in starts in 2013 is expected to be reflected in a jump in completions in 2014-15, averaging an increase of over 8% per year. As there has been no drop in living space completions in recent years, these anticipated increases indicate new records will continue to be set for the number of square meters of living space completed, at least through 2015. In turn, this will support further growth in wood product consumption.

While further growth in both panel consumption and production are to be expected in China through at least the middecade, and most likely into the beginning of the next decade, the pace of growth is likely to slow further. This will particularly be the case as and when the construction and furniture markets both become cyclical as China's economy matures.

For a generation or more, China's economy has simply grown year after year, so projections of total panel demand growth have been best represented as linear. However, at some point, cyclicality in construction markets, and personal consumption, will assert itself, just as in all developed economies. At that point, panel consumption will experience periods in which it declines.

How will China's producers respond to such an economic reality? Most likely the smaller and less efficient operations will be driven out of business; consumers and OEMs will re-examine product usage and shift their demand from one material to another (eg, away from plywood to MDF/HDF, or possibly a non-wood material). Another factor to be considered is the possibility that domestic panel manufacturers will lose out to imports of panels, or of manufactured products which incorporate panels in their construction (eg furniture).

China does not have a clear long-term competitive advantage in manufacturing lumber and panels: fibre is expensive; chemicals such as resin are not inexpensive; and labour is a relatively insignificant portion of the total cost structure of a highly mechanised MDF, HDF, OSB or particleboard mill, providing limited offset cost savings to high wood and resin prices.

The potential for increased imports of panels, particularly plywood, are relatively high as China's plywood manufacturers struggle with issues of quality and the availability of legal log supplies to manufacture high quality face veneers. Certainly China's plywood export business faces significant challenges now and these challenges will not disappear soon.

So, while CFPA does not project any significant surge in China's panel imports in the rest of the decade, an eye does need to be kept on the potential of more offshore supplies penetrating China's panel markets.

Production: history and forecast
In several of our past articles, we have commented on issues relating to the quality and accuracy of China's reported production data (from the State Forestry Administration, SFA).

We have made several tentative attempts to adjust that data, and in 2013, in conjunction with RISI, CFPA made an intensive review and adjustment of the data as part of producing a 15-year RISI forecast for timber demand in China.

A full discussion of that forecast - and of the methodology used to adjust reported data - are to be found in the RISI publication authored by Robert Flynn, China Timber Outlook 2013: Special Market Analysis Study (to purchase, contact RISI at www.risi.com; Bob Flynn at [email protected]).

Figure 2 illustrates the adjustment made by CFPA/RISI to the total panel production data reported by SFA in the period 2007-12. The largest revisions were made in 2011- 12, with 33% downward adjustments in both years, and the largest product changes were made to the reported plywood quantities.

The adjusted data for the years 2006-12 is presented in Table 2. (Note: SFA has acknowledged problems with its reported data and will likely publish revised data at some point, but to the author's knowledge, no adjusted data has been published as of the beginning of 2014.)

Panels represent about 78% of China's combined lumber and panel production (the panel share of consumption is lower because of the large volume of lumber imports; panel imports remain insignificant).

The estimated increase in production in 2013 was all channelled into meeting domestic consumption.

Overall, China's panel exports in 2013 were flat-to-slightly-lower. Given the reported exports in the first three quarters of 2013, we estimate last year's panel exports will total 13.48 million m3, 1.5% below the 2012 total of 13.68 million m3 (Figure 3 and Table 3). The drop was entirely due to weaker exports of MDF/HDF (down 12%); plywood exports eked out an estimated 2% increase.

Given the CFPA forecast assumptions about growth in China's GDP, industrial production, furniture production, and housing (Table 1 and Figure 1), CFPA projects further increases in total panel production in each of 2014 and 2015.

Blockboard and particleboard represent the remaining panel volumes tracked in Table 2, each with 2015 volumes above 20 million m3.

Increased imports of logs and lumber will meet a significant portion of this market growth, but larger demands will also be placed on China's own forests, particularly the poplar and eucalyptus plantations that have become a key element in supplying China's forest products industry.

And if the CFPA/RISI production estimates are on the low side, then the issues related to how to supply a biggerthan- estimated market will become even more acute and will be reflected in increased pressures on global timber supplies and prices for many years to come. 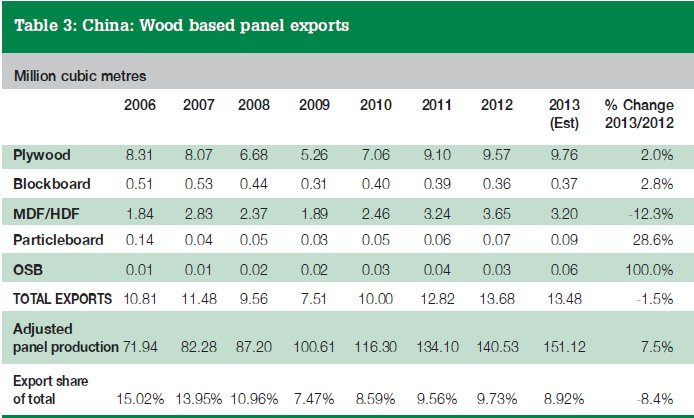 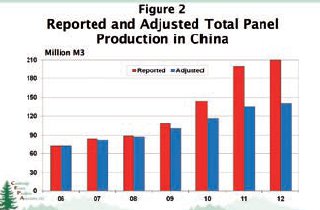 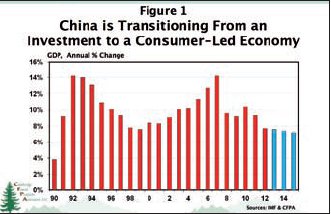 Figure 1 China is transitioning from an investment to consumer led economy. 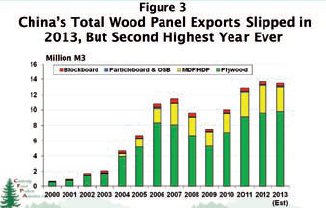