The first part of our annual global survey of the particleboard industry was published in our October/November edition. In Part 2, Stephen Powney looks at developments outside Europe and North America

This latest survey of the global particleboard sector covers the industry outside Europe and North America, with the main listing featuring mills as at the end of 2018.

In the previous issue, the headline figures showed growth in Europe and North America, with the Europe (EU28+ those European countries outside of EE) overall capacity figure as at December 31, 2018 increasing to 54.6 million m3 and the North American figure being 9.79 million m3.

In total, the “rest of the world” capacity for 2018 we now have as breaking through the 40 million m3 mark, as listed in Table 1.

But the overall numbers of future lines being ordered does appear to have slowed, with less investment in new mills being reported by panel makers, with regional variations, of course.

As always, panel manufacturers and equipment suppliers are welcome to please let us know of further updates or omissions to allow us to amend the figures.

As reported a year ago, a number of new mill lines and upgrades have been announced in South America, particularly in Brazil, over recent years, although with not all coming to fruition.

Probably the standout most recent project in South America is Novopan del Ecuador’s doubling of medium density particleboard (MDP) production at its Quito plant, a project which produced its first board in June, 2019. This additional 300,000m3 capacity, featuring a Dieffenbacher press, doubles the plant’s MDP capacity to 600,000m3 and will appear in next year’s main listing for 2019.

The company told WBPI that the additional capacity and wide product range will allow it to make further growth in the Latin America Pacific Coast region and also further northwards, including the US.

Staying in Ecuador, it has been reported that Quito may also be the location for a planned new particleboard line for Aglomerados Cotopaxi SA. No other details or timescale is yet known.

In Brazil, the economy has had its problems in recent years, with high interest rates and unemployment, while market oversupply for panels has also been an issue.

But there are signs of improvement in demand and business confidence, with the country’s industrial output rising.

The Central Bank of Brazil voted unanimously to trim its key Selic rate to 4.5% during its December meeting. This is against a background of an average interest rate of 14.73% from 1999 until 2019.

And the level of mothballed particleboard capacity has also reduced as producers have brought capacity back on line, as is the case for Duratex’s Itapetininga site.

It is understood that mothballed particleboard capacity in Brazil is now down to 22%.

We have added additional capacity in Brazil within the main listings for Berneck and Fibraplac in Santa Catarina and Glorinha respectively. This includes updating where older projects were previously omitted. In the case of Berneck this investment at Curitibanos, Santa Catarina dates back to 2016 and was a first phase featuring a Siempelkamp press with approximate annual capacity of 400,000m3.

With no fresh information on the large Duratex plans at Minas Gerais (700,000m3) or extension plans at Arauco do Brasil (former Masisa plant) in Montenegro we are still keeping these as potential future capacity development in Table 5. A potential new Duratex MDF / particleboard mill in the state of Alagoas has also been mooted.

In China, despite poor panel prices and over-capacities, investment activity has continued. Two of the latest particleboard plants utilising rice straw as the raw material were at Wanhua Ecoboard in Jingzhou, Hubei Province and in Tongling, Anhui Province. Both produced their first boards within days of each other in June, 2019 and follow hot on the heels from Wanhua’s earlier new Jingmen particleboard plant (annual capacity of 250,000m3).

The two latest projects appear in Table 5 future capacity (2019) table, before moving to the main listing next year.

Dieffenbacher was the press supplier on these projects, which marked the debut of the CPS+ system in China. The company has been working with Wanhua on alternative raw material production since 2015.

Wanhua Ecoboard was founded to produce formaldehyde-free panels made of wood and straw.

Demand for technology to make these types of panels is increasing, with rising wood prices and environmental policy requirements the typical drivers. Large volumes of rice straw waste have typically been burned in fields in the past.

A sixth Dieffenbacher particleboard plant for Wanhua is also being constructed in Bengbu, Anhui Province, while a fine surface OSB plant (a product which features particleboard surfaces) is scheduled for start-up in Lankao City, Henan Province in 2020.

Staying with China, the Taishan Welibon Woods conversion from MDF to particleboard (240,000m3 new annual capacity) – completed in 2018 – has now been moved to the main listing, along with the Ganzhou Aigesen 900m3 daily capacity plant, which actually saw its first board produced in 2017.

In Japan surely the first prize for the most spectacular new location for a particleboard plant goes to ENboard Co Ltd for its plans for new plant in the Shizuoka prefecture at the foot of Fuji Mountain, Japan's World Heritage Site and landmark.

A ceremony was held in September, 2019 to mark the signing of the supply deal with equipment supplier Siempelkamp, which will supply from wood preparation to final production including the overall planning of the plant.

The heart of the new plant, which is to be operated mainly with recycled wood and will serve the domestic market, is a 7ft x 47.1m ContiRoll Generation 9 press.

In Australia the newest particleboard line was commissioned in February, 2019 by Borg at Oberon, NSW. The 495,000m3 facility, featuring a Siempelkamp 8ft x 40.4m Generation 8 ContiRoll continuous press line, had originally been announced back in 2016.

The line effectively replaces the older Structaflor line at Tumut (dating back to 1963), which Borg inherited when it bought the assets from Carter Holt Harvey at the start of 2018. The Tumut line appears in the main listing for 2018 but will be removed next year, the Oberon plant replacing it.

It is billed as the most efficient particleboard line in the southern hemisphere. Being a continuous line, new size opportunities can now be explored, as the pressed mat can be docked at different lengths such as 2700mm, 3150mm and 3600mm. In contrast, the old Structaflor product could only manufacture fixed 3600 lengths.

Meanwhile, Laminex is now the operator of another former CHH plant – Gympie, Queensland.

The 100,000m3 annual capacity plant had been shut down by CHH in early 2019 but was reopened by Laminex, part of Fletcher Building Ltd.

This change in ownership will also be reflected in the 2019 main listing.

Nearby in New Zealand China’s Guangxi Fenglin Wood Industry Group is moving forward with plans to establish a large NZ$100m particleboard factory in Kawerau. Its intention is to establish the mill by 2020 with an expected annual capacity of 600,000m3 – a major development in the region. This project is listed as future capacity.

In India, we can report that Centuryply's particleboard expansion plans will involve increasing capacity at its Sitapur site by 150,000m3, with a possible target completion date of 2020.

The mill, which will help the company expand its market share, will increase group capacity to over 1 million m3.

At 50.4m long it is believed to be the largest particleboard continuous press in Asia and it will also be Siempelkamp’s first 9th generation ContiRoll in the region.

Also in Thailand, manufacturer Vanachai’s particleboard line plans, flagged up in previous surveys, has been removed from the future capacity list as its order for the 4ft x 48.7m continuous press with Siempelkamp has been switched to OSB instead. 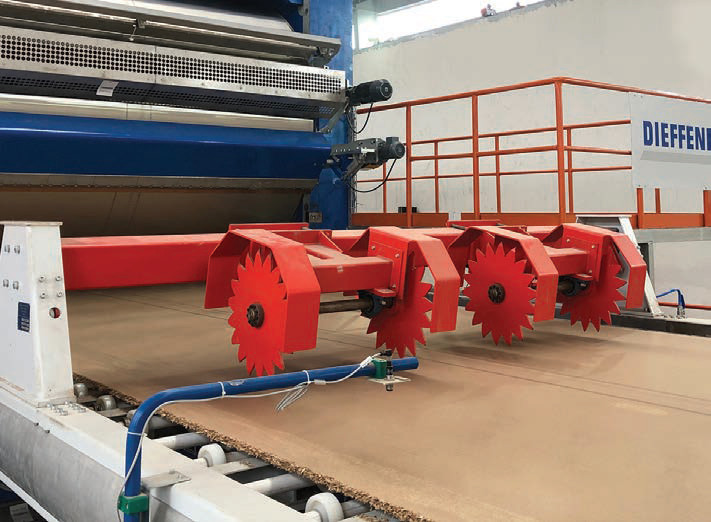 First board production at the strawboard line at Tongling, China

Table 1: Mills outside Europe and North America at end-2018 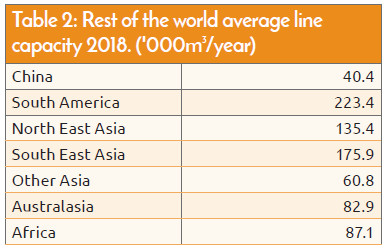 The new Borg plant in Australia