A very positive picture of current business levels and activities was painted by Dieffenbacher during WBPI’s Focus on Germany visit to the company’s Eppingen site in November.

While acknowledging a wider global economic slowdown, the company reported that its wood business unit and new recycling division were experiencing a very good order intake and rapid growth respectively.

Dieffenbacher also unveiled new branding in 2019 with its “Move Forward. Together.” motto seen emblazoned on its stand during the Ligna show.

Markus Trame, project manager marketing and PR at Dieffenbacher, explained that its new branding was the culmination of a two-year consultation process with customers and employees.

“The two things customers most valued about Dieffenbacher were partnership and progressive thinking,” said Mr Trame.

“This is not something we made up but something our customers came up with themselves.”

The customers reaction to the new appearance has been good, while Dieffenbacher’s assessment of business prospects from Ligna generally was also upbeat.

Meeting rooms were full during the show and the company also conducted a VIP plant tour of its customer Swiss Krono’s particleboard plant in Menznau, completed in 2017. About 70 Ligna visitors attended, including a strong Asian contingent.

Dieffenbacher said 2019 has been particularly successful in supplying complete plants on all continents.

“Sales are developing according to plan, and capacity utilisation at all production sites is secured well into the coming year,” it said.

The Wood Business Unit booked 18 new plant orders by the end of November. Twelve of these were received by Dieffenbacher in Eppingen, while the Chinese subsidiary Shanghai Wood-based Panel Machinery (SWPM) received six orders for continuous production lines for smaller capacities. Orders came both from existing and new customers.

Swiss Krono Group ordered a complete OSB plant this year with a 65m long CPS+ for its location in Sharya, Russia.

Additional orders were received from Camsan Ordu (complete MDF plant in Ordu, Turkey) and for one of Asia’s largest Dieffenbacher’s Eppingen plant particleboard plants in Guangxi, China, among others.

Another Chinese customer will be supplied with one of the largest complete plants in the world for the production of Fine Surface OSB (OSB with particleboard surface layers) including a 65m-long CPS+.

“China is still strong,” said Mr Trame, adding that most projects are MDF/THDF and particleboard plants.

A total of 14 plant start-ups in the past 10 months have been recorded.

The Starwood particleboard project in Turkey (first board produced in July, 2019) is a particular source of pride for Dieffenbacher due to the smoothness of the project delivery.

“We think this is quite a good performance because we also see this economic slowdown," said Mr Trame. "We are wellprepared to do business even in more difficult times.”

Dieffenbacher has of course seen plant shutdowns in North America and elsewhere.

“We do not like to see that but we will also see new projects coming. We are not afraid of the future.”

On January 1 last year there was a landmark moment when Dieffenbacher set up a dedicated recycling business unit, an area that is becoming increasingly important globally due to raw material shortages and the need for sustainability.

“This is really a market where there will be a lot of projects in the future,” said Mr Trame.

Dieffenbacher has been active in the recycling field since 2014, starting with recycled wood. To date it has sold five wood recycling plants, including to Pfleiderer, Fundermax and Nolte.

A wood recycling plant was installed at Pfleiderer’s Neumarkt operation in 2017 (start-up in 2018) and now processes 50 tonnes of waste wood per hour. Newer plants can process up to 70-80 t/h.

Another customer is German manufacturer Nolte, which launched its VIDA kitchen door range in September 2018. Nolte was among the first kitchen manufacturers to bring to market a kitchen cabinet door made from recycled materials – a high-specification particleboard made from quality wood of old furniture.

Two further wood recycling plants are planned to be delivered to customers.

“Our colleagues in the recycling business unit are working 24 hours a day,” said Mr Trame. “Because it’s a new field there is still a lot of R&D work to do.”

Size reduction is of course an important feature in recycling wood, with the Dieffenbacher ClassiSizer a key part of the solution.

“We always had the size reduction technology, sorting and cleaning technology and we have co-operation partners for other areas involved as well,” said Mr Trame.

Using recycled wood for MDF production is another focus of interest.

While wood is definitely the largest and most advanced area of recycling for Dieffenbacher, other applications are being pursued as well, including alternative fuels (such as agricultural waste), waste to product (eg panel products out of plastic waste) and municipal solid waste and organic waste (MSW).. household waste.

“For many waste to product applications we can use the same technologies that we already have for our wood-based panel plants. It is not really about the technology but the know-how and process of how to do it.”

Plastic recycling is still in its infancy, but Dieffenbacher recently exhibited at plastics show K 2019 in Dusseldorf to showcase its solutions in this area.

This past year has also seen new technology launches and updates for Dieffenbacher. These include the High Capacity Oscillating Screen (HCOS), Evojet M 2.0 and MAIER Knife Ring Flaker MRZ.

The HCOS has been developed specifically for producing high capacities.

It has a capacity of 260m3/hr but the inclination can be adjusted to allow for a greater 325m3/hr per capacity.

Integrated Flameless Explosion Relief (IFER) is incorporated, meeting ATEX standards. The screen can thus be situated inside the production hall. It weighs just 60% of comparable screens, meaning less building foundations are required and it is easier to install.

On the gluing side, Evojet M 2.0 was launched at Ligna 2019 for the MDF market, for both new lines and retrofit applications.

Quoted benefits include resin savings of up to 25%, reduced emissions out of the dryer, high throughput, minimum cleaning and less pre-curing of the resin.

The FlowOptimizer is a special distribution rotor integrated into the flaking chamber of the knife ring flaker, which ensures 3D distribution of material flow.

Quoted benefits include reduced specific energy consumption up to 20%, increased flaker throughput up to 25% and uniform wear and extended service-life of wear parts up to 20%.

The company’s MyDieffenbacher digital platform has also been expanded with the MyMessenger and MyCockpit apps launched at Ligna 2019, following on from MyParts (the online spare parts catalogue) in 2017.

Customers now have a wealth of digital services for easy monitoring of plant efficiency and operations. A dashboard with KPI measures performance and internal messages can be sent like Whatsapp for customers, with service tickets created and Dieffenbacher technical staff able to easily and clearly see the whole conversation thread if customers decide to share this with Dieffenbacher for easier problem solving .

The 24/7 aspect of this system allows technical personnel to access the app at home, while an integrated translation tool helps overcome any language difficulties.

Dieffenbacher says it is hard at work on new systems to launch at the 2021 edition of Ligna, so watch this space!

The HCOS was premiered at Ligna 2019 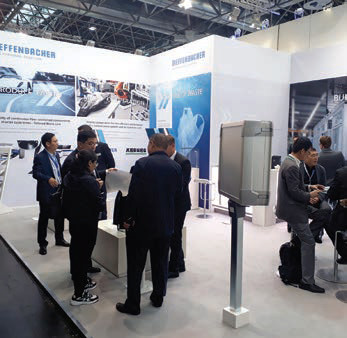