MDF – from newcomer to stalwart

In 1976, when the first samples of Medite MDF were seen in Europe, few would have believed the amazing and positive impact MDF would have on the industry.

At that time MDF was unknown in Europe and was in many ways completely under-estimated in terms of its future potential.

My personal involvement with Medite started in 1976 when the first intriguing samples, showing a machined-edge profile and deep-routed section, were sent from Medford, Oregon, US, to a new European audience!

Initial manufacturing was at that Medite MDF plant, capacity 140,000m3. Using a Washington Iron Works multi-daylight press, Sunds refiners, Steinemann sanders and Jenkins sawing lines, a very consistent-quality panel was produced, which was to change the nature of the European panel industry.

In those days the US facility produced two products: Standard MDF had a hard paintable surface and an excellent core configuration, with an overall density of 750kg/m3; while for greater strength and to facilitate quality deep routing, a higher density Medite was also available, produced with an overall density of 960kg/m3. Raw material used in Medford was a mix of western softwoods: Sitka spruce; various pine species of Oregon/Washington origin; and a small amount of Douglas fir.

Significant export volumes were sold via Seaboard International in Europe, leading, in 1980, to the decision to build a mirror-image plant of the original Medford design, in Clonmel, Ireland. It was believed that Europe had the same dramatic growth potential already being seen in the US and Canada.

Some US$50m was invested into the project and by September 1983 the European mill was up and running. Supply from the US was gradually phased out once production in Clonmel started to gain momentum and an acceptable quality was established.

In the early 1980s, a massive sales and marketing effort was needed to influence decision makers that high quality MDF was a ‘new choice’ that would be available on a sustainable basis. Highly creative advertising, strategic media bookings, direct mail shots and technical literature in various European languages saw the market driven up in a fast curve of increasing consumption.

What had started so strongly as a furniture industry-related substrate in 1983, by 1989 started to become a very interesting raw material to a construction industry always on the lookout for new materials.

With the introduction of moisture-resistant MDF, produced using melamine-fortified enhanced resin systems, a new alternative to wide widths of clear solid timber became available as the joinery trade found that large boards of MDF could be cut to 225, 250, 275 or 300mm and in lengths up to 4.8 or 5.4m, effectively presenting a clear piece of defect-free ‘timber’ that could be machined, moulded and painted to a very high quality consistently.

A mini industry evolved, initially providing window boards, followed by a whole host of architectural mouldings, primed and ready to go on site. This was a big breakthrough.

In those pioneering days, no European standard for MDF existed and it was through the endeavours of the likes of FIDOR and the EMB that EN622 eventually emerged as the guideline for the minimum standard.

The flooring sector became an enormous consuming industry, with a number of MDF manufacturers setting up production lines purely to service its raw material needs.

Production methods changed in the late 1980s and early 1990s, with continuous press technology becoming ever more popular; most multi-daylight presses had stopped by 2000.

Consumption of MDF in Europe grew continually from 1976 and the installed production (nameplate capacity) evolved, topping 15 million m3 by 2010, with consumption, even in these somewhat more difficult trading times, reaching 11.4 million m3. To put in perspective this amazing growth, by 2010, European production of plywood was 2.4 million m3, OSB 3.6 million m3, hardboard/softboard 2.7 million m3 and particleboard an impressive 30.8 million m3.

Many issues still need to be faced, particularly when considering the competition for raw material from biomass energy and the question of what values for MDF panels should be applied and can be accepted.

But great market opportunities are also there to be grasped when we consider the drive to sustainable construction and development. In my view, innovation and new product development will bring more MDF products to market in the next few years. Enhanced technical features, different adhesive systems and thin panels will gain in popularity. Potentially, MDF panels incorporating phase change materials (PCM) may also evolve. And there will be more.

When Medite launched the Medite2016 forum in 2006 (www.medite2016.com), the two themes chosen were to reflect on the achievements of the previous 30 years of MDF supply and then to look critically ahead 10 years. I am confident that an intriguing variety of profitable business opportunities exist but the key to success will be consistent and committed marketing initiatives.

In the next 10 years I think far more investment in R&D will be necessary and I anticipate strong partnerships with academia and selective universities playing an ever increasing role as the industry looks at what we can really do with the fibre.

For a really blue sky idea, imagine having an MDF panel that could incorporate PCMs and then beneficially affect and control the temperature in a room. Latent heat storage could be achieved through solid-solid, solid-liquid, solid-gas and liquid-gas phase change, ensuring uniform room temperature without the carbon emissions and costs associated with conventional heating and cooling. All could be a part of internal wall structures or even furniture and interior MDF components.

And another blue sky item would be to deliver the ‘holy grail’ for the panel industry –a fully robust and exterior MDF panel that can withstand the elements and be performance guaranteed, whilst bringing all MDF’s design freedom and usage benefits that we have all become familiar with over the past 35 years. This may not be so far away! 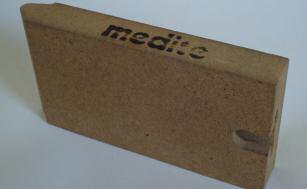