Kronospan Holdings East Ltd says it is considering investing up to six billion roubles (USD$180m) in the establishment of a plant for the production of OSB in Russia’s Bashkortostan region. Our Russia correspondent, Eugene Gerden, reports.

According to the government of Bashkortostan, the new OSB plant will be built by 2016 in the Ufa area of the region and in the process will create 250 new jobs. Production volumes of the new plant were not disclosed, but, according to some sources close to the project, they could be in the range of 250-300,000m3/year.

In preparing this project, Kronospan apparently considered several Russian regions for the establishment of its factory, including Tatarstan, Sverdlovsk and Perm Krai.

According to the initial plans of the company, the new plant should have been built in the Perm region, where the authorities had even secured a production site for the investor. However, those plans were never implemented.

At the same time, in the case of Tatarstan - one of Russia's most economically developed regions - the forest resources available were recognised by Kronospan as being insufficient for the implementation of such a large project.

According to the company, the final decision in favour of Bashkortostan was taken due to large tax advantages offered by its government - and the provision of a good production site for the future plant.

In addition, support for the project was personally promised by Rustem Khamitov, president of Bashkortostan.

The new factory that Kronospan intends to build is scheduled for commissioning in 2014 and also involves the establishment of an industrial park for further processing of timber, with an annual capacity of 2.5 million cubic metres of wood per year.

This will be the second large project in the field of OSB currently being implemented by Kronospan in Russia.

At present, the company is preparing for the launch of OSB production at its existing Russian plant, located in egorievsk (Moscow region) and up to now specialising only in the production of particleboard and MDF.

The capacity of that plant at the initial stage will be 300,000m3/year, while the second phase will take it up to 500,000m3/year. The volume of investment in that project is estimated at €120m.

The company plans to sell its products in different regions of Russia, as well as in neighbouring countries, and in Asia.

In the meantime, Russian analysts believe that Kronospan may not be able to realise both its Russian OSB projects according to plan, as this would incur significant costs for the company.

Russia currently still does not have its own OSB production, but Kronospan will probably not become the first producer of OSB in the country.

This is because it is planned that the first, long-awaited, Russian OSB plant will soon be launched by Kalevala company in the city of Petrozavodsk. The commissioning of that new factory is scheduled for the coming weeks.

The new enterprise will produce sanded, unsanded, rebated as well as decorative OSB panels. At the initial stage, the output of this factory is expected to be 300,000m3/year, which will later be increased to around 500-600,000m3.

Total value of investments in the factory will amount to more than €150m.

In addition, another major project which involves OSB production will be launched by the Oris company in the Perm region during 2013. That new facility will have a capacity of 500,000m3, while its total cost is estimated at US$335m.

The launch of new investment projects will help to change the current situation in Russian OSB, the market for which is at present fully supplied by imports.

Over the past seven years, the volume of OSB imports to Russia has increased by 15 times - in spite of the high customs fees and transportation costs. Currently, the Russian OSB market is estimated at 400,000m3.

However, the OSB segment is not the only sector of the Russian panels market which has attracted interest from foreign investors in recent years, many of whom have announced their plans for expansion.

For example, among the biggest projects are the recently-announced plans of Interwood Invest AG to invest 23.9 billion roubles (€590m) in the establishment of a plant for the production of MDF and particleboard in the Irkutsk region. This project is scheduled for launch in 2015.

In addition, the Chinese AVIC company plans to build several plants for the production of OSB, MDF and particleboard in the Tomsk region (Russian Siberia). Total production capacity of the factories will amount to 680,000m3/year, while the cost of the project is estimated at 20 billion roubles (€494m).

New cluster
In the case of the Tomsk region, according to the majority of Russian analysts, the region will become a centre of Russian production for panels of all types in the coming years.

Currently, the share of the Tomsk region in the total production of particleboard in Russia is estimated at 5.5%; and 60% in the whole of Siberia. At the same time, the authorities in the region are not satisfied only with what has already been achieved, but they are planning to continue strengthening the position of their region in the domestic board market.

According to Oksana Kozlovsky, deputy governor of the Tomsk region, by 2015 that region is expected to account for up to 15% of the total Russian production of particleboard; and 30-35% of MDF.

There were also facilities for the production of OSB, as well as a number of other products, including plywood, veneer and furniture.

This will be achieved through the implementation of a number of investment projects, including the already-mentioned plans of AVIC, as well as the projects initiated by some local manufacturers, in particular OOO Tomlesdrev.

That company has plans to build a second plant for the production of particleboard by 2015, worth four billion roubles and with a capacity of 250-300,000m3/year.

Then there is Partner-Tomsk company, which is ready to invest 12 billion roubles (USD$360m) in the construction of a plant for the production of MDF, with a capacity of 264,000m3/year.

Total volume of investments in the Tomsk cluster will amount to more than 35 billion roubles during the next several years, while their implementation will create about four and a half thousand jobs.

By 2020, total production of panels, and related products, in the region will amount to about two million cubic metres per year. 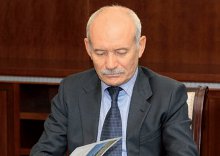 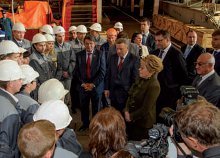 Inside Kalevala’s OSB plant in Petrozavodsk 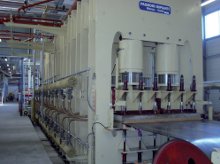 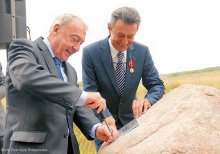 Site where Kronospan OSB factory is expected to be built