Drum and roller specialist Krafft enters its 150th year of trading in 2020. Stephen Powney visited the company’s Düren headquarters to find out its latest developments

An acquisition, expansion of a production hall and exploration of 3D printing and digitalisation are just some of the recent news for Carl KRAFFT & Söhne GmbH & Co KG (Krafft).

The company, based in Düren near Cologne, is a long established specialist in the design and production of rollers, cylinders, drums, shafts and guide rolls for a wide variety of industries and can trace its roots back to 1870 with its origins in building machinery for the paper sector.

I caught up with joint managing directors Michael Hess and Peter Kayser as the company prepared to enter its 150th year. They had just negotiated the acquisition of the insolvent Wumag Texroll in Krefeld, including the site, machines, trademarks and transfer of 24 staff members.

Wumag itself has 60 years of history in producing rollers for industries such as plastics, textile, rubber, chemical, printing, wood and the paper industry.

Krafft will operate Wumag as a subsidiary and believes the new acquisition will allow it to take advantage of the “extraordinary capabilities” of the production site in Krefeld and achieve numerous synergies with the business in Düren, including effectively bringing some operations in-house.

Although the acquisition does not change its solutions for the wood-based panels sector, some machinery will be exchanged between the Düren and Krefeld sites.

The directors also signalled that current production facilities (two sites in Düren totalling 12,500m2) would be expanded with an additional hall.

Meanwhile, people may have noticed that the Kelzenberg brand, the subject of an earlier 1999 takeover and a name long associated with rollers for the wood-based panels industry, has now been fully merged into the group, with the Krafft logo now prominent and the Kelzenberg product portfolio transferring to Krafft.

Wood-based panels sector business may be small in terms of the company’s overall turnover but Krafft still has a big reputation in the sector.

Raw wood panels, kitchen worktops and laminate flooring are some of the woodbased applications where Krafft rollers are in use.

These days the majority of the work is supplying replacement/restoration/exchange drums for presses, rather than being an OEM as it was in the past for the likes of Siempelkamp and Binos. It does, however, supply rolls to several machinery producers in the panels sector.

The larger peripherally drilled heating drums for Calender Roller from the AUMA or Mende series have diameters up to 5.2m and can weigh up to 130 tonnes. For Mende presses it offers an on-site service for the renewal of the overlay welding on the heating drums.

It isn’t just the rollers or drums, but also the bearings, pulleys, frames and other ancillary components which the company supplies and services.

Design changes over recent years have led to a more sophisticated design in Krafft’s products, but the company is also looking at further improvements.

“What will be the products in the future?” asked Mr Kayser. “How will the rolls be produced – will they be printed or from sheets?”

Mr Kayser hinted that the rollers of the future wouldn’t be made through classical machining. “We will print rolls in the future using 3D printing,” he added.

He wasn’t sure on the timeline on this development, but estimated the change may take anything from 5-30 years.

Krafft is already experimenting with 3D printing of rollers, which could reduce the time of production.

“It will not be for 2-3m drums for woodbased panels but for smaller items made in bigger quantities,” added Mr Kayser. “But the final surface treatment will be a mechanical process even if the body is 3D printed.

“For our young workers here they will be using that kind of technology in the future.”

The potential of using 3D printers to make fluid heated rolls is also being examined by Krafft, with fluid volumes increasing and the need for fluid optimisation in production facilities.

In addition, Krafft is looking to reduce the volume of welding in its products, which will help reduce manufacturing time.

Krafft has done its first assessment on digitalisation of rolls using sensors to monitor their use while in operation (it has two patents on sensor systems). A two-year R&D project in partnership with a university is exploring this area, looking at how digital services can give an overview of the performance of multiple rolls in operation at customers’ premises in order to optimise maintenance and predict maintenance cycles.

“This is different from our normal business model,” explained Mr Kayser. “Normally when a roll leaves the factory and you hear nothing that is good news.”

Now, he said, it was looking to have an ongoing digital/online customer interface as an added service. Disappearing traditional manufacturing skills in customer industries is partially the reason for this, with suppliers like Krafft having to provide solutions in response.

“These natural skills are gradually disappearing and workers are just following the logbook. This is happening in every industry, so we will definitely need to increase our skills on this side.”

Another big trend is, of course, the environment and sustainability, which Krafft sees as positive as many of its products are used in industries dealing with natural fibres, while the increase in electric cars means more demand for battery separation foils.

An increased focus on alternative materials for panel production – for instance, straw to replace wood – may require increased scrutiny for these applications in terms of what temperature and pressures are involved in the production process and what the demands are on the rolls.

“But we can produce anything here that the market demands,” said Mr Kayser. 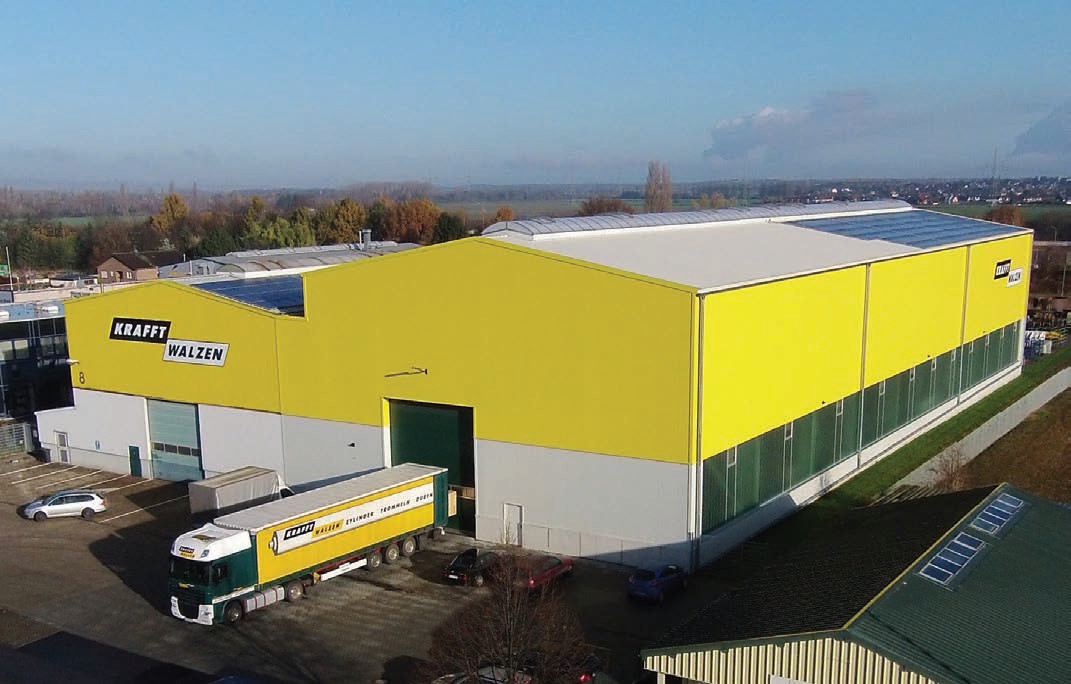 Krafft is based in Düren 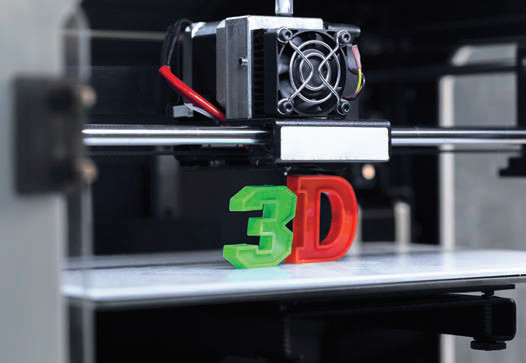 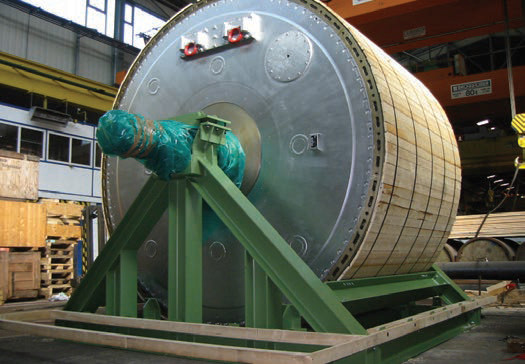 Heating drum in frame at the Düren manufacturing facility