This is our final survey, for 2014, of the world panel industry and covers mills operating at the end of 2013, outside Europe and North America. We also look at the markets and at new mills planned for 2014 and beyond.

In part 1 of our survey of the world particleboard industry, we reported that eastern Europe was showing the way in terms of new mill investment in Europe and North America.

For this report, on "the rest of the world", we look at what has been happening in the world outside Europe and North America.

China and South America have been the countries making the biggest recent particleboard line investments, but both markets are now experiencing a slowdown, with few new orders to report in 2014. This means there are less new projects to add to future capacity, but a number of existing projects are still planned for implementation, particularly beyond 2015.

Some changes in our survey are in addition to projects shown in last year's report and some are held over from last year's future capacity list, as they were not actually running during 2013.

As always, the editor would be very pleased to receive information about any mills or production lines that may have escaped our net when we were trawling the globe for information for this report.

We use a range of sources, including equipment suppliers, industry experts, relevant publications and, not least, the mills themselves, who are invited to visit our website www.intermark.plus.com at any time and enter/amend their details, or email the editor: [email protected]

Such input is always most welcome in helping to ensure that our information is as accurate as possible.

We will now look at where the major capacity changes are occurring, or about to occur, around the world outside Europe and North America

China
In last year's report, we listed a number of mills commencing production in 2012, including the Anhui Yeji facility at Luan and at Guangxi Huasheng at Guigang. Both actually went live during 2013.

In the listing of Future capacity developments in Table 5 of last year's survey, which was of 2012, we showed that Hongwei's new line, in Shaoguan, Guangdong, was due to start up in 2013. This 220,000m3 facility actually started full production in December of that year and now enters the main listings.

Beyond that, the Yunnan Xinzexing WBP Co (150,000m3) investment at Fumin, involving a Dieffenbacher SWPM 4ft x 28.9m continuous press, is now scheduled for 2015 start-up. We have removed the Kunming Yunnan (150,000m3) listing as this and the Yunnan Xinzexing investment above are actually the same project. A large, 600,000m3/year, project is planned at Jianfeng in Bazhong, Sichuan Province, comprising a Siempelkamp ContiRoll 8ft x 43.7m press.

The total volume in China has had to be estimated due to the high numbers of smaller, rural mills making it difficult to arrive at a truly accurate figure.

South East Asia
In Asian regions outside China it has been relatively quiet on the new particleboard line front, with the Eagle Eye particleboard project for Green River Panels at Songkhla in Thailand being a notable exception. This will involve a Dieffenbacher 8ft x 27.9m CPS Press, manufacturing 6mm to 35mm thick boards in 2070mm x 2500mm sizes. Start-up is scheduled for 2015.

Also in Thailand, Vanachai's 235,000m3 4ft x 38.5m Contiplus continuous press from Dieffenbacher SWPM has now been moved to the main listing after the start of commercial production in January 2013.

Other Asia
The big news in Bangladesh is that the country is to have what is believed to be its first continuous-press particleboard line. Two discontinuous lines (both single-opening and multi-opening) operated by Star Particle Board Mills at Dhaka have already been in operation for some years with a combined output of 280,000m3.

The new 260,000m3 capacity mill, ordered this year by the Akij Group, is due for start-up in 2016 and is expected to increase daily production capacity of particleboard in Bangladesh by another 1,000m3. The facility will feature a Siempelkamp 8ft x 23.8m Generation 8 ContiRoll press.

South America
In Brazil, an upgrade at the Arauco mill at Piên, which added 120,000m3 of additional capacity, has now been added to the main listing of existing mills.

An additional 200,000m3 of capacity was added at Duratex's Taquari MDP line in 2013 and has therefore also been added to the main listings.

In terms of future capacity, we have modified our capacity figure for the planned Fibraplac particleboard line at Glorinha, due to new information received. Its capacity is due to be 325,000m3, not the previously stated 600,000m3. No date has yet been set for the line installation, so it appears as "beyond 2015" in Table 5.

An update on Berneck's existing plans for a particleboard line in Curitibanos, Santa Catarina state, was forthcoming when Siempelkamp announced that a 9ft x 38.7m ContiRoll press would be supplied as part of a two-stage project. In the first stage, daily capacity will be around 1,200m3, while the output will rise to 2,400m3 in the second stage.

With no further updates about Duratex's plans for a 700,000m3 MDP line at its planned wood product complex in Minas Gerais state, we are showing this project as "beyond 2015" in Table 5.

Meanwhile, in Chile, Arauco's 300,000m3 mill at Teno now appears in the main listing of existing plants, having started up in 2012.

In Ecuador, Novopan was due to complete the second stage of its MDP plant at Itulcachi, adding 80,000m3 of capacity by the end of 2013. This has been added to the main listings.

Middle East
There is little to report in this market, other than the increase in capacity at Pooya Wood's multi-opening Siempelkamp line at Shergah, Iran, to 360,000m3 in 2013 and a planned new 240,000m3 continuous line in the country. This has been ordered from Dieffenbacher but no customer details have yet been released. This project appears as "beyond 2015" in Table 5.

Africa
The only news we are aware of is the launch of NHR Investment's Swaziland mill in 2012, with the 10-daylight press-operated mill (equipped by Guangzhou Weiheng Machinery) now joining the main listings.

Future capacity changes
To summarise, planned new capacities are still dominated by China and South America, but less projects have been added to the pipeline this year. We show a net total of 580,000m3 in planned new capacity for 2014, but little change for 2015, though it is possible some 2014 projects may extend into the following year. A number of large Brazilian projects contribute towards a 2,925,000m3 capacity growth beyond 2015 - a growth of 7.5% over the 2014 estimate. 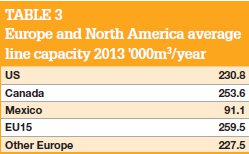 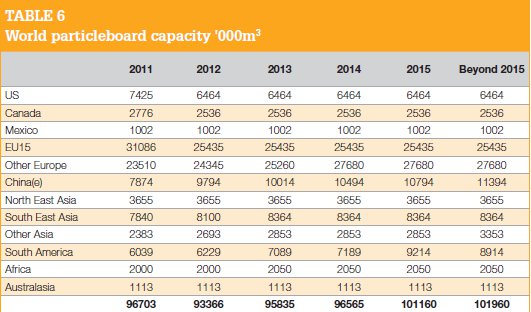 Table 1: Mills outside Europe and North America at end 2013 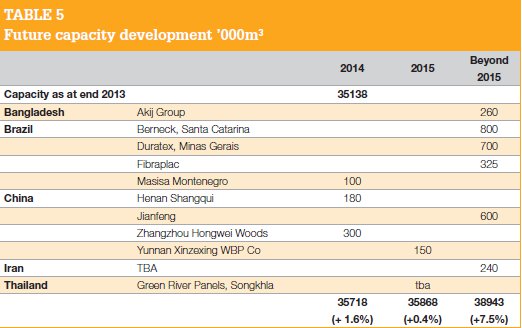 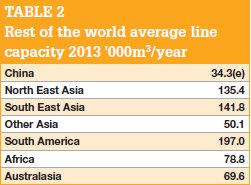