The 4th International Conference on Advanced Engineered Wood & Hybrid Composites drew attendees from throughout the world to Bar Harbor, Maine, in mid-summer.
The session, sponsored by the University of Maine Advanced Engineered Wood Composite Center, Orono, Maine, presented and discussed commercial, scientific and engineering aspects of advanced engineered wood and hybrid composites.
Zhiyong Cai, PhD, PE, materials research engineer of the US Forest Service’s Forest Products Laboratory, Madison, Wisconsin, reported on bamboo as a natural fibrous grass capable of growing in near-timber volumes and sizes.
He said it has a commercially viable global distribution from tropical to sub-frigid zones. Bamboo can be manufactured into numerous types of top-grade construction materials to meet different performances by introducing a combination of advanced restructuring technologies.
Recently, parallel bamboo strip composites (panel and beam), using phenol formaldehyde (PF) resin impregnation technology, have been investigated at the Forest Products Laboratory. The new bamboo composites show excellent mechanical properties. The modulus of elasticity of a parallel bamboo strip beam can be as high as 35GPa (5.1x106 psi), which is two- to five-times higher than most existing wood composites.
In hurricane wind testing of a parallel bamboo strip panel, a 15-pound southern pine 2x4in, driven at about 110miles/hour, failed to penetrate the 0.9in bamboo panel. The high modulus of elasticity and impact resistance of the new bamboo composites demonstrates high potential for value-added construction material.
Dr T Sean Connolly, Plum Creek Timber Co, Columbia Falls, Montana, commented that North American MDF and particleboard traditionally have used urea formaldehyde resin. Ultra low formaldehyde emission regulations and ‘green building programs’ that specify non-added-urea formaldehyde products have placed increased pressure on the industry to
develop alternative resin systems.
Plum Creek MDF, in partnership with Hexion Specialty Chemicals, has worked on developing new resin systems for MDF. Laboratory trials and mill production trials have been performed to compare panel properties and mill productivity for the following resin systems: melamine urea formaldehyde (MUF), phenol formaldehyde (PF) and polymeric methylenebis (phenylisocyanate) pMDI.
Jan Luedtke, University of Hamburg Department of Wood Science Mechanical Wood Technology, reported on a continuous production process for lightweight panels.
He said modifying process parameters, or applying adjusted gluing systems, could reduce weights. Sandwich structures are an effective way to reduce weight while maintaining mechanical properties.
Sandwich panels are typically produced in batch processes in which the layers are glued together, or by continuous processes in which a foam core is injected between facings.
As both methods lack the possibility for a simultaneous production of all layers, a novel one-stage process for an integrated continuous production of wood based facings with a foam core has been developed.
A three-layer mat, of glued wood particles and expandable thermo-active core material, is formed and then hot pressed. The formation of the surface layers takes place directly, before the expansion of the core layer. The surface layers are compacted and cured in the initial pressing stage. The core is inactive until the temperature in the middle layer exceeds a certain level. On reaching this temperature the expandable material starts to react and increases its volume. The press is then opened to the final board thickness to allow the core to expand.
Since the process is similar to the well-established wood based panel production processes, only slight modifications to the equipment are needed.
Robert Noble, Noble Environmental Technologies, La Jolla, California, reported on eCor, being developed as an engineered structural panel using agricultural land recycled paper fibres. He said the product, with its high strength-to-weight properties, can compete with traditional wood based composites such as particleboard or fibreboard.
Boards can be made with or without adhesives, or any chemicals added, for many applications.
John B Busel, American Composite Manufacturers Association, said the industry has revenues of US$16.1bn per year with 125,000 employees.
He said market factors will influence the stability and growth of the North American composites market. The state of today’s residential housing market impacts composites, but this segment may hold the key to new opportunities.
He added that regulatory issues will not go away. The industry must position itself to react to situations, as they appear. “Innovation will be the key,he said.
James M Westcott, Heartland Resources Technologies, Waunakee, Wisconsin, described soy-PAE resin originally developed by Kaichang Li at Oregon State University and first commercialised by Columbia Forest Products. Hercules Inc holds worldwide patents.
Dr Westcott said soy flour contains about 50% protein. The balance is mainly carbohydrate with some water, ash and fat. Soy protein concentrate has about 70% protein. Most of the soluble carbohydrate is removed, but it still contains insoluble carbohydrate.
On the marketing side, Thomas Williamson, APA - The Engineered Wood Association, Tacoma, Washington, said wood-framed houses made up more than 90% of US housing starts. He said it is imperative to protect and expand wood-framed residential markets.
He advised that the raised wood floor market should be expanded and traditional wood framing maintained by educating builders, designers and code officials.
Mr Williamson said the use of wood in non-residential construction represents the largest US wood market growth opportunity. His conclusions were:
• Residential markets are being challenged by steel and
concrete.
• Gulf coast effort (rebuilding after hurricanes) can spread to all concrete slab on grade markets, including the entire south and southwest.
• Use of wood in non-residential construction represents the largest US wood market opportunity.
• Advances in FRP reinforced wood products will expand opportunities for both residential and non-residential
construction. 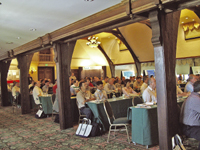