Dahe is another newcomer to the panel making business, choosing an imported continuous line to make its MDF and thin HDF panels at its factory in Zhengzhou, Henan province

The general manager of the panel business is Mr Tao Zhongxian.

The group is involved in forestry, paper, highway construction, property and banking.

"Because we have the plantations, and the paper making uses the larger diameter logs from that resource, we decided to go into the panel making business," said Guo Zhigang, technical director of Dahe.

"There is also a lot of fruit tree wood available in this area which is suitable for panel production, in the form of apple and peach, but mostly peach," said Mr Guo.

Serious planning for a panel line began in 2008 and in 2010 the company placed a contract with Dieffenbacher of Eppingen, Germany, for a CPS continuous press line, including much of the ancillary machinery.

"We decided on a continuous press from the start because there are many multi-opening lines in China producing poor quality products and wasting a lot of wood in sanding and offcuts," explained Mr Guo.
"The panels from a continuous press are of better quality and are better suited to smaller diameter and fruit tree wood raw material, in my opinion.

"As a state company, we had to invite both Siempelkamp and Dieffenbacher to tender for the contract but we did not invite any Chinese companies to tender - from the beginning we only wanted an imported continuous press.

"We looked into the market and asked advice [from other panel manufacturers] about the two competitors before deciding on Dieffenbacher."

The contract was signed in October 2010. The land for the mill had already been purchased in 2008.

Construction work on the factory buildings began on May 17, 2011 and machinery deliveries commenced that July.

The first board was produced on the 16th February 2012 so at the time of my visit in early March, the line was still doing test runs, with full production due to start in May.

Total investment in the Zhengzhou factory was RMB506m (US$80m).

"Our target end-uses are according to the condition of the market at the time, but we anticipate it being in furniture, doors, packaging for high-quality products [gift boxes, wine bottle boxes], shoe heels and maybe electronic circuit boards.

"The Chinese economy is growing fast and demanding higher-quality products and so the demand for high-quality packaging is growing with it.

"At first, our target sales area will be within a 500km radius of the factory, with Henan being the most important market locally, as it is a central province of China.

"Our second target sales area will be within a 1,000km radius and we hope to export board at some time in the future."

Value adding has also been on the corporate mind and the company plans to build a laminate flooring line in 2013.

"We are in early negotiations with an investment company, but the land is already allocated and if we make good money with our THDF, maybe we will go ahead with the laminate flooring line," said Mr Guo.

The total site at Zhengzhou covers 600m2, with 100m2 set aside for the construction of the laminate flooring line.

Looking at the prospective market for his products, Mr Guo said: "There is a lot of MDF on the market at present from multi-opening lines. The quality is not good and the price is low and that is dragging the
market down. In future I think the property market will improve and therefore the market for MDF will also improve. I expect it to get better by the end of this year. Our mother company also has a property arm so that will be a customer, too".

Mr Guo also said that the farmers in China are getting richer and currently live in "ugly" buildings which they will rebuild and decorate, creating another market for his MDF.

"The government wants to encourage these farmers to improve their homes and gives them grants for this," he said.

I asked Mr Guo his views on the fact that many people are saying that there is enough, or maybe too much, MDF/HDF on the market already and that particleboard manufacture is where the real future lies.

"In my opinion, the country, and the population, is so large and there are so many of those multi-opening press lines, that as people get richer, they will want high-quality MDF and that is only available from continuous lines like ours," he said.

"Also, the government is paying increasing attention to environmental issues and environmental protection as well as cost reduction and continuous press lines are better than multi- or single-opening ones on all those points.

"My personal feeling, although I have no direct experience of particleboard, is that sometimes the particleboard market is up and sometimes it is down. I don't see an increase in demand for particleboard at the expense of MDF."

And what is Mr Guo's opinion on what is currently perhaps the most controversial panel in China, OSB?

"OSB is a new product in China and it needs time to gain acceptance. Personally, I think that in future it may become a competitor to particleboard," he said.

It is perhaps surprising that a completely new entrant to MDF/THDF production should enter the market at a time when many people are saying that it is already overcrowded. Mind you, they were also saying a few years ago that there was sufficient/too much MDF and that particleboard was the future but many more MDF plants have still been built since then.

The logic for Zhoukou Dahe Forestry Co Ltd is, however, obvious, in that it has its own guaranteed wood supply and, to some extent, its own captive market in its property division.

It would thus seem that this venture is less risky than it might at first appear. 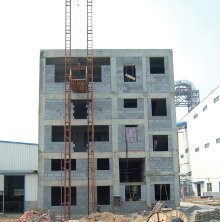 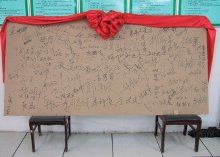 First board, traditionally signed by the staff 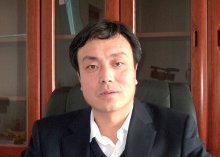