Panel Plus has been in panel making since it built a bagasse particleboard line over 20 years ago. The company grew dramatically in 2004 with the acquisition of two particleboard lines in Hat Yai, where it has now added MDF.

The company was searching for a solution to its, literally mounting, problem of bagasse - the waste fibre product from sugar production.

That solution came in the form of a particleboard line, built by Bison at one of the company's sugar refineries in Khon Kaen in 1991. To the company's credit, that line is still running successfully today and, nine years ago, was upgraded from 200m3 to 300m3/day.

It appears Mitr Phol came to like the idea of being in particleboard production, because in 2004, it bought two continuous press production lines, which had been built in the early to mid-1990s on a large site in Hat Yai in southern Thailand. These lines had never run commercially because the company that built them (STA Group) went into liquidation before it had a chance to operate them fully.

The story of Panel Plus' long and arduous journey to bring those two Siempelkamp ContiRoll press lines into full operation has been well recorded in the pages of WBPI over the intervening years (February/March issues of 2005 and 2007).

These four were in addition to the Wemhöner short-cycle press line which Panel Plus had installed in its own factory in Samutsakorn province in around 2000, which still produces 1500 melamine faced particleboard panels a day.

Over the years since it re-started the two particleboard lines at Hat Yai, with the assistance of Siempelkamp's engineers, Panel Plus has established itself as a significant force in the production of both unsurfaced and surfaced panels, adding a Vits impregnation line in a smart, dedicated new building at the Hat Yai site, in 2007. That building in fact has space for a second impregnation line, when the time is right.

Panel Plus claims to be the biggest supplier of melamine faced particleboard in Thailand, all of which goes to furniture manufacturers.

In 2009, after some deliberation, Panel Plus decided it was time to enter the MDF market.

"Our customers needed a total solution," explained Sethapong Chandhanayingyong, assistant managing director, marketing and supply chain at Panel Plus. "They had been asking us for a long time when we could support them with both particleboard and MDF, so the market forced us to think seriously about this product.

"A second factor was that particleboard and MDF used to be two separate markets [in Asia] - if one market was down, you could rely on the other because the applications were not the same. Now, more customers are consuming both particleboard and MDF in the one factory," said Mr Chandhanayingyong.

Teerapol Prakitchaiwatana, supply chain management director for Panel Plus, took up the story.

"We decided we should go into MDF/HDF manufacture at the end of 2009 and got approval from the company board in early 2010," said Mr Teerapol.

"We had a long relationship with Siempelkamp and felt that they offered the best machine for our needs."

A totally new building, with smooth curved roof lines admitting plenty of natural light, was erected on the Hat Yai site, starting at the end of 2010, and the machinery for the production line arrived on site in July 2011.

The first board came off the end of the line on April 2, 2012 and commercial production began in June of that year.

With the arrival of the new MDF/HDF line, Panel Plus' management took stock of the situation at the Hat Yai factory and decided to close particleboard line 1, which had a 6ft x 18m ContiRoll press.

"The six-foot width was not really economical and we felt we could use the staff to run the new MDF line, so we stopped particleboard production on that line in mid- 2010," said Nakorn Phuekwilai, executive vice-president of manufacturing at Hat Yai.

"The ContiRoll was sold to a European panel manufacturer for relocation to eastern Europe, where they plan to modify it and double the capacity from our 400m3 a day with a press extension.

The MDF/HDF line
A separate company within the group was formed to run the MDF side of the business, called, not surprisingly, Panel Plus MDF.

The smart new factory building was erected on land originally occupied by the STA veneer operations and later used as part of the log yard.

The ContiRoll is 38.7m long and 2.5m wide and produces board in thicknesses of two to 40mm.

The wood supply is 100% rubberwood, from local farmers, which is plentiful in this part of southern Thailand, and that means there is enough to go round the various wood consuming industries there, including Panel Plus' local competitors in panel making.

The only part of the line not sourced through Siempelkamp was the Steinemann eight-head sander, which is configured to be extended to 10-head if required at a later date.

The debarker was made locally to Siempelkamp specifications, while Hombak supplied the flaker and CMC Texpan (both companies part of Siempelkamp) the screening system and forming.

Because of the need to avoid latex lumps in the finished MDF in order to ensure highquality MDF panels, there is a special sifter supplied by Scheuch of Austria, through Siempelkamp - the SWS 4.50. "This was a new design when we bought it," said Mr Nakorn. "Nobody else in South East Asia has this system and it is very important for the quality of our panels."

The sifter is installed between the fibre dryer and the forming station and in this system, fibre quantity is measured and fibres are fed to the sifter via an intermediate rotary valve. Spiked feed rollers then uniformly distribute the flow of material over the entire cross-section and loosen and advance the material. The fibre stream then enters the actual sifter, where an upward stream of air on the side of the sifter captures the fibres.

A second stream of air from below counteracts the downward motion of the fibres and builds a curtain of air. Only those particles with a higher settling speed than the speed of the rising air fall to the bottom, where a screw conveyor feeds them to a rotary valve for discharge.

The air stream carries fibre particles with a lower settling speed to the exit of the sifter. They are then transported pneumatically to a cyclone unit, separated, and fed to the forming station.

The refiner is from Metso and is an Evolution Defibrator, EVO 64.

After the ContiRoll, panels are automatically handled by SHS systems to the Steinemann sander and Siempelkamp cut-tosize system and then to intermediate stock on steel bearers.

The energy plant is from Siempelkamp Energy Systems and runs 100% on wood waste to heat the thermal oil and dryer.

There is a resin plant adjacent to the Hat Yai factory. Originally set up by Dynea, this is now owned by Japanese company AICA.

During this year, Panel Plus has increased its range of boards to include E1, E2, E0, CARB Phase 2 and F four-star Japanese standards.

The factory currently produces high-moisture- resistant (HMR) particleboard and intends also to make HMR MDF by the end of 2013.

In a demonstration of its concern for the environment, Panel Plus has a dry electrostatic precipitator (ESP) system installed at the energy plant to scrub the emissions.

This was again supplied by Scheuch, which says its ESPs are used exclusively for de-dusting applications requiring clean gas dust concentrations as low as 10 mg/Nm3. By using up to three electrical fields in succession, Scheuch says it is possible to achieve separation rates of up to 99% or more.

"This is much more efficient than a multicyclone," said Mr Nakorn. "You really have to use a dry system after the energy plant because a wet electrostatic precipitator can be dangerous and you have the waste water which has to be treated afterwards. We care for the environment and as Hat Yai town has grown over the years, the people are closer to the factory than when it was built - then it was surrounded by jungle."

This is a European-supplied MDF line, built to European standards, including safety fencing as well as environmental controls and Panel Plus, as with all its production lines, keeps the working environment in its factory spotless.

Comprehensive offering
With the completion of its MDF line, Panel Plus is able, for the first time, to offer its customers the full range of panel products for furniture and related uses.

Its offering now includes particleboard made from both bagasse and wood, MDF made to international standards from rubberwood, and a very comprehensive range of melamine faced panels in particleboard - and MDF if required.

It is perhaps unfortunate timing that saw Panel Plus and two other Thai companies build new MDF capacity at the same time; and that the market for both particleboard and MDF is currently not as good as they would like.

However, Panel Plus now has the considerable advantage of being a one-stop shop for both panel types, together with the biggest melamine facing capacity in the country.

The markets will improve in time and Panel Plus is more than ready - and able - to take advantage of that improvement when it comes. 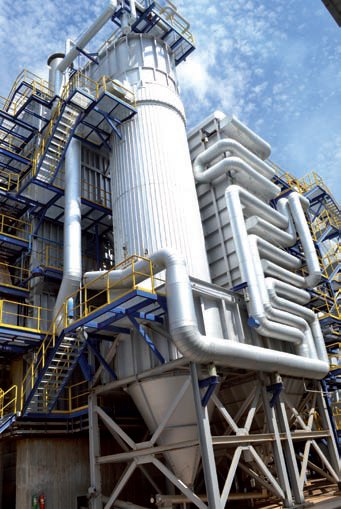 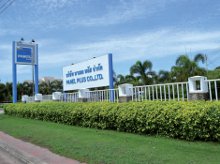 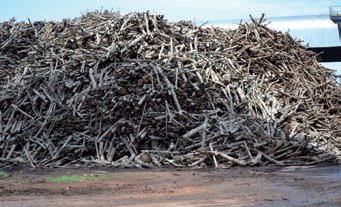 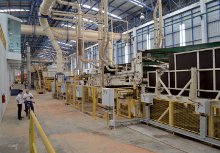 Pre-press with control room on left 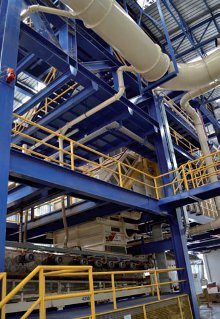